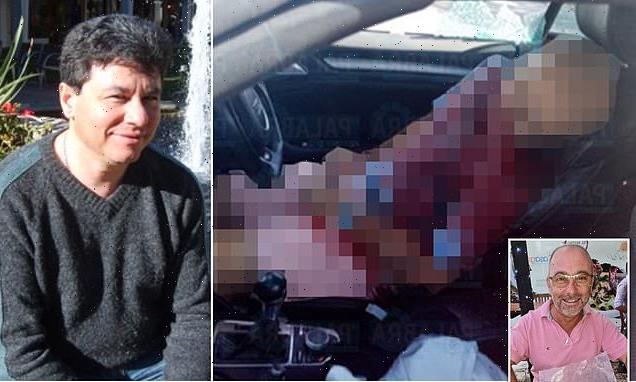 A British estate agent is executed in cold blood in another lawless day in Cancun: How Cornwall-raised Chris Cleave’s assassination comes A YEAR after his business partner was shot dead for ‘standing up to Mexico’s drug cartels vying to control the resort’

A British estate agent shot dead in a gangland hit in front of his teenage daughter in Mexico was murdered a year after his business partner was gunned down the same way, MailOnline can reveal.

Chris Cleave, 54, was driving his red Audi in the popular resort of Playa del Carmen, Cancun when he was ambushed and shot in the head by two men through the driver’s side – months after he was warned by gangsters that he would end up in a body bag.

Now MailOnline can reveal that his business partner Vitaly Feygin, 57, was assassinated in a similar way as he drove home last March.

Both men are understood to have been murdered shortly after resisting demands from a drugs gang to pay extortion money for being left alone to run their restaurant.

Two local men have been arrested on suspicion of murder by police probing Cornwall-born father-of-one Mr Cleave: 30-year-old Jose Guadalupe and Leni Vladamir, who is aged 17.

Investigators have told MailOnline that they are working on the theory that Mr Cleave was targeted for standing up to extortion attempts by a cartel.

They said initial evidence points to his refusal to pay extortion money or allow drug dealing at the restaurant called ‘El Bistro’ that he ran with Mr Feygin in an upscale gated community called Playacar from 2019 until soon after his partner’s assassination. 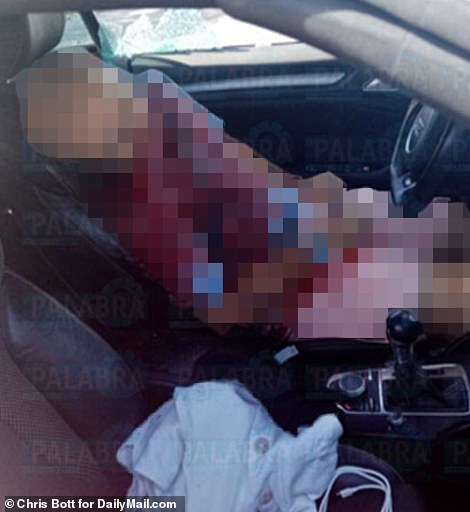 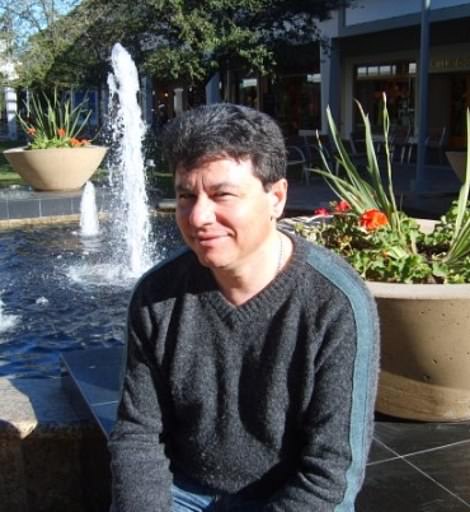 Chris Cleave, 54, a father-of-one from Truro in Cornwall is pictured left lying dead behind the wheel of his red Audi on Saturday in the Mexican holiday resort of Playa del Carmen, Cancun. The estate agent’s murder comes a year after his business partner Vitaly Feygin (pictured right) , 57, was executed in the same fashion on March 21, 2021 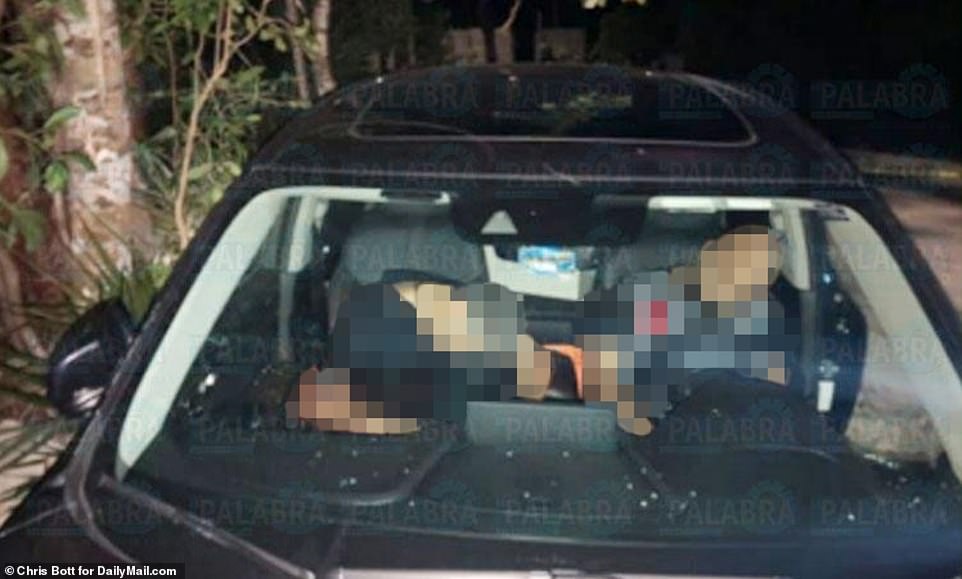 Photos obtained by MailOnline show Mr Feygin (left) slumped in the front seat of his car having been shot multiple times. His driver, named Fernando (right), was also slain with the killers firing from a motorcycle – the same way Mr Cleave died 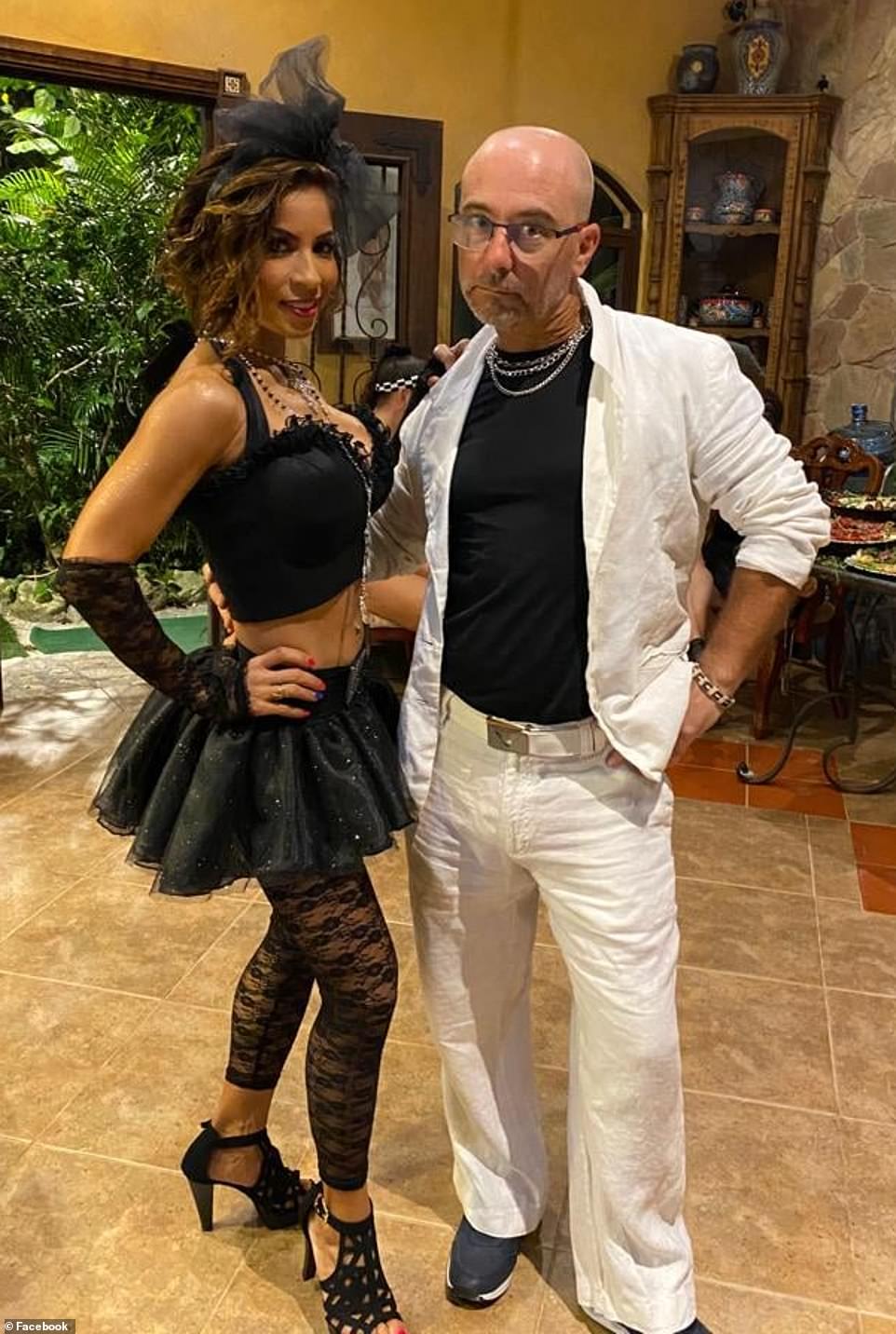 In the hit, Mr Cleave’s 14-year-old daughter, who MailOnline are not naming, was shot twice. The girl was taken to hospital and is now at home in Mexico recovering with her mother Monica, from whom Mr Cleave (above with a friend) was separated 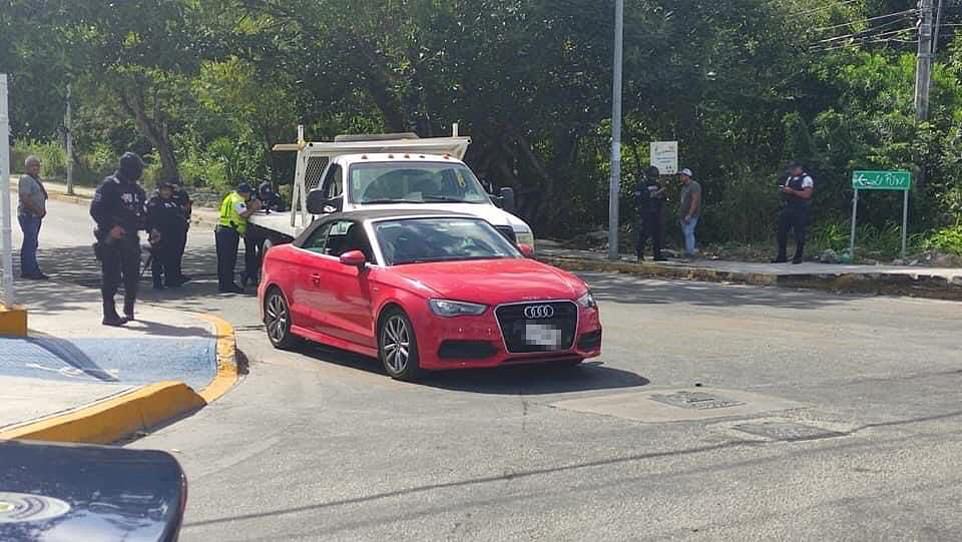 Mr Cleave’s red Audi is pictured at the murder scene in Playa del Carmen over the weekend after the murder that police investigating are linking to the assassination on his business partner 12 months ago, which remains unsolved 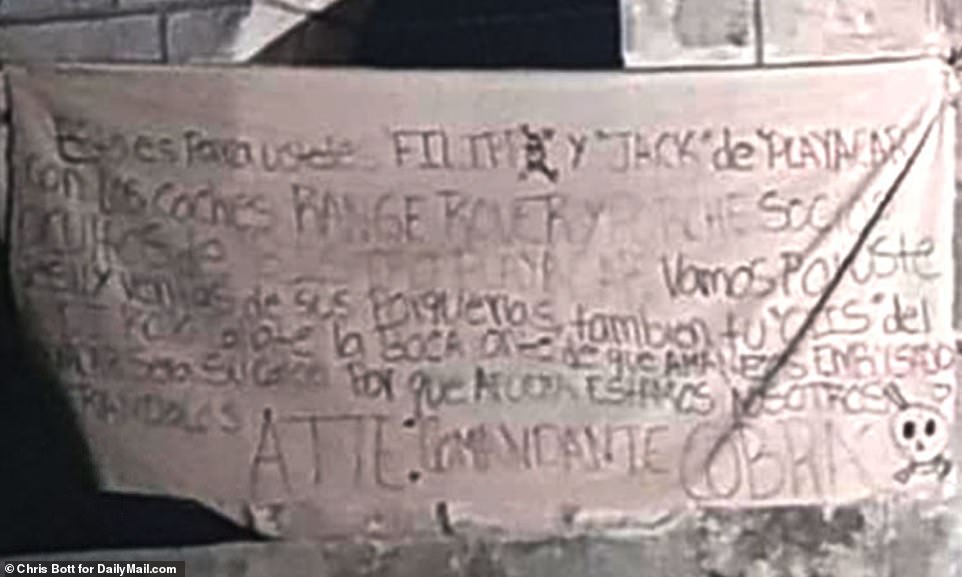 Shortly before Mr Feygin’s death, on March 5 last year a ‘narcomanta’ – a cloth banner used by the cartels to convey a deadly warning – was attached to a building close to a restaurant the men ran to tell Mr Cleave that his life was in danger. The banner (above), written in Spanish, said: ‘We are coming for you and the sale of your s***. Also for you Cris [sic], with the red Audi.’

A police source told MailOnline: ‘Everything in the investigation so far points to extortion and the earlier death of his business partner. They are connected.

‘We are still gathering evidence. One man has been charged and we are proceeding with a court appearance. The other person arrested is a minor and has appeared at a juvenile hearing.’

Police said there is no evidence to suggest the estate agent, originally from Truro, Cornwall, was in any way involved in drugs – except to refuse to allow them to be sold around his business.

The police source said: ‘The hitmen would not even know why he was targeted – they would have just been told to carry out the killing and not to ask questions.’ 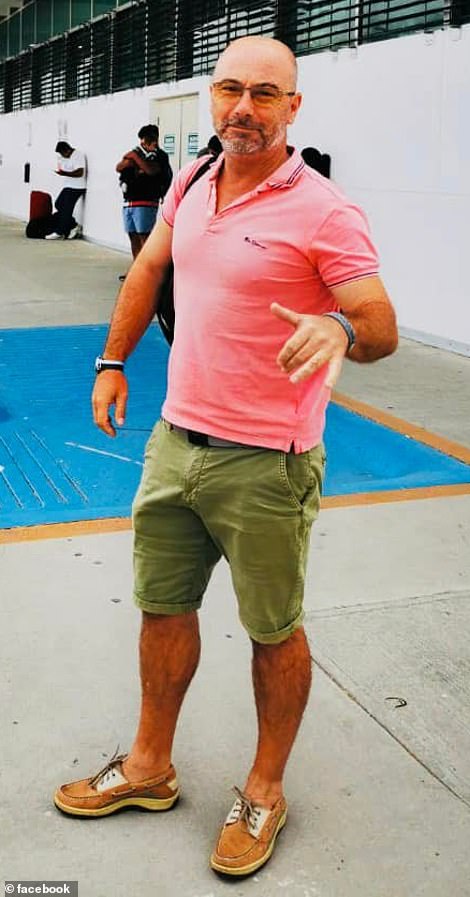 While police were able to hold Guadalupe and Vladamir immediately after Mr Cleave’s murder on Saturday, they are still yet to arrest any suspects for the murder of Mr Feygin on March 21st 2021.

His death remains one of many of unsolved murders in Playa del Carmen where gangland violence is endemic: just this week the chopped-up bodies of two people were found in black bin bags dumped by the side of the road.

The fact that the business partners died in identical circumstances points to the same person ordering the execution, says the police source.

Both men were sitting in their cars when gunmen pulled alongside and opened fire.

Mr Cleave’s 14-year-old daughter, who we are not naming, was hit twice in the leg during last weekend’s shooting. Her injuries are not life threatening but she is understood to be deeply traumatised. She is recovering at home with her mother Monica, from whom Mr Cleave was separated.

Photos obtained by MailOnline show Mr Feygin slumped in the front seat of his car having been shot multiple times. His driver, named Fernando, was also slain with the killers firing from a motorcycle – the same way Mr Cleave died as he waited at a busy junction on the outskirts of Playa del Carmen.

Quintana Roo State Prosecutor Oscar Montes de Oca Rosales confirmed that in the past Mr Cleave had been threatened by drug dealers.

The extortion threats to the men are understood to have centred around the El Bistro restaurant they ran together in a gated community where some of the area’s richest people have homes and many tourists gather. Once thriving, it today is closed with shutters up.

The first suggestion the restaurant’s owners were under serious threat came just days before Mr Feygin’s death when a ‘narcomanta’ – a cloth banner used by the cartels to convey a deadly warning – was attached to a building close to their restaurant where all could see it.

The message, written in Spanish, said: ‘We are coming for you and the sale of your s***. Also for you Cris [sic], with the red Audi.

‘Shut your mouth before you find yourself in a body bag. Playacar will be your prison because outside we’re waiting for you.’

Friends said Mr Cleave was determined not to let the drug cartel drive him from his home having lived in Mexico for 23 years.

One friend said he stopped using the red Audi in the hope that it would not attract attention from the cartel bosses and their foot soldiers who carry out the murders. 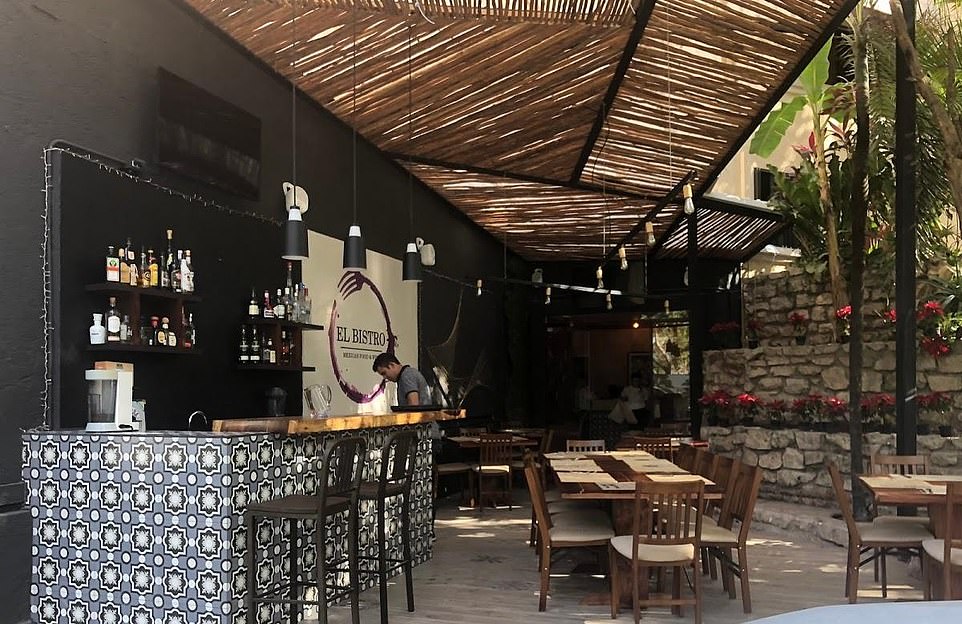 Both men ran El Bistro in Playa del Carman (pictured) and police investigating their murders believe that the businessmen resisted attempts by gangs to either deal drugs on the premises or extort money from them, which put their lives in danger 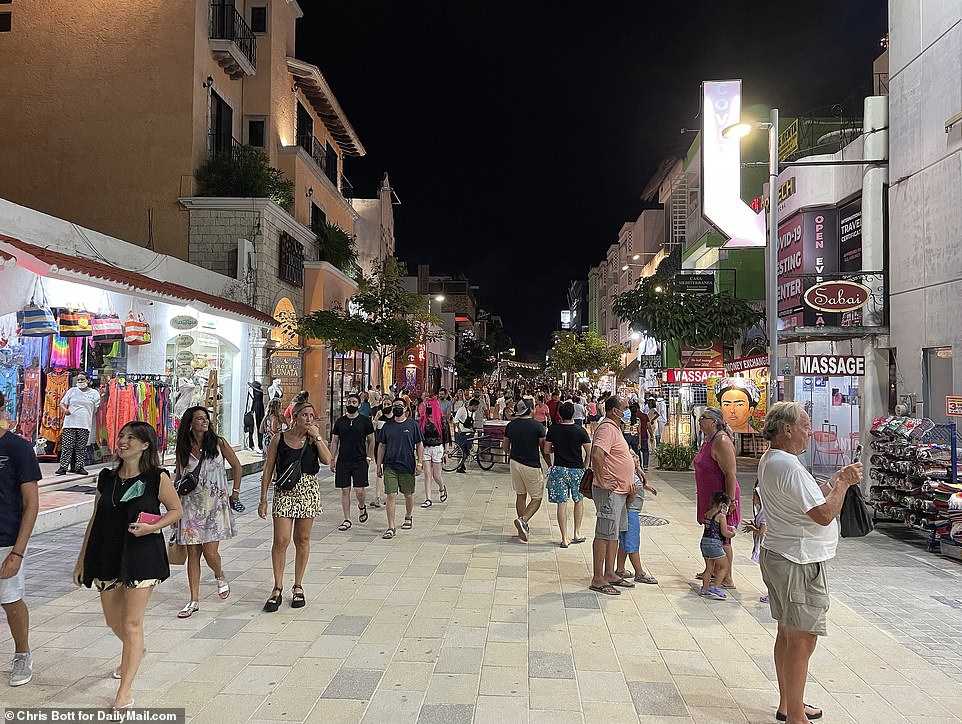 The holiday resort of Playa del Carmen is popular with tourists including around 550,000 Brits visiting the area a year despite the violence from at least six rival gangs vying for control of the lucrative narcotics trade 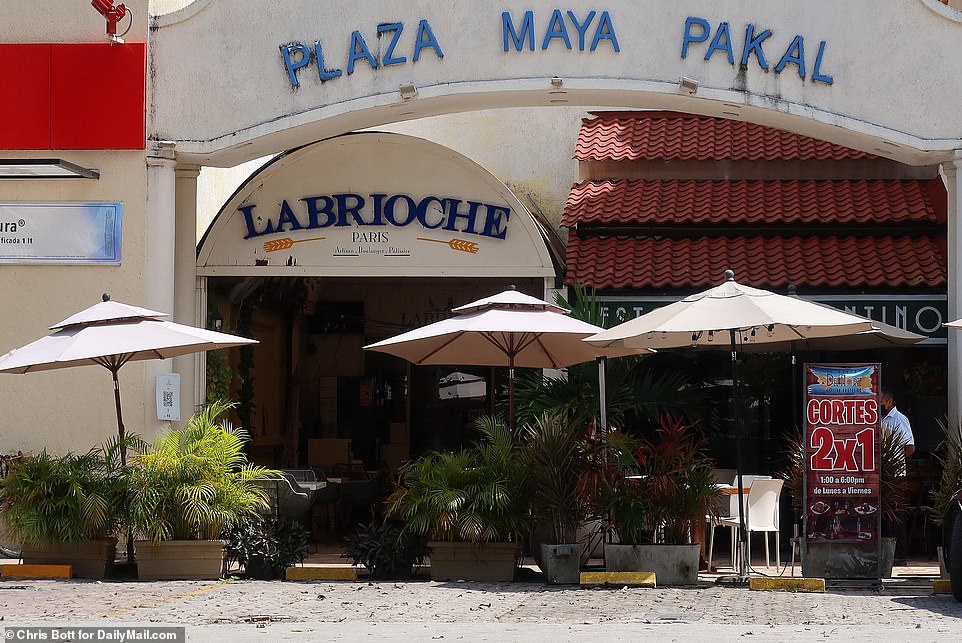 ‘The banner was a message for him to leave the town and he just stopped using the car so as not to draw attention to himself,’ the friend said.

‘As soon as I heard Chris had been murdered, I knew it was linked to the killing of Vitaly. He was executed a year ago and everyone knew it was by a drugs gang

‘Vitaly would not back down for the gangs, and it cost him his life. Same for Chris, it seems.’

Mr Cleave, who had Mexican residency, as well as his restaurant interest also worked as an independent estate agent in Playa del Carmen. 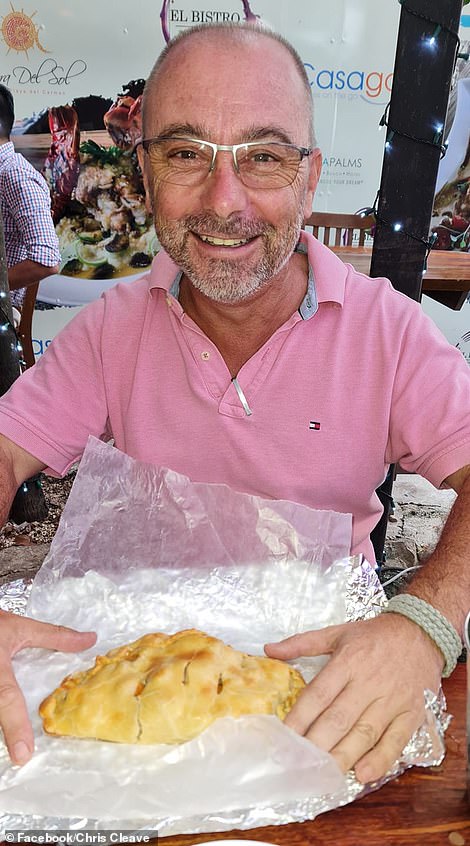 He did not have an office but would set up at an outside table at La Brioche bakery in the gated community where he was well known and much liked.

The resort with its neatly tended lawns and championship golf course is a world away from the grim drug violence that plagues much of Playa del Carmen. CCTV cameras scan the roads and visitors have to present identification to enter in an attempt to keep out the criminal element.

Many of the more expensive homes that sell for over £1m have stunning ocean views across the Caribbean Sea to the popular resort of Cozumel Others are built around the manicured greens of the Hard Rock Golf course.

Mexican crime expert Vincente Carrera told MailOnline that the resort is the centre of a vicious turf war between gangs.

‘Drug cartels here are fighting over every inch of every place where drugs are sold,’ said Mr Carrera. ‘Those places are where there are lots of tourists. Drug dealing and extortion are out of control here.’

The expert, who writes about crime for the Cancun based Noticaribe website, said many business owners had been forced to close their restaurants and bars due to being subject of extortion payments.

He said the situation was so bad even street vendors selling chicken and trinkets to tourists were being forced to pay money to gangs.

With over 12 million visitors to the beach resorts, millions of pounds are at stake in drug sales.

And with business booming after the two lost years of the pandemic gangs are using extortion to make up the shortfall in revenue.

There are as many as six gangs affiliated with major Mexican drug cartels operating in the region of Quintana Roo. A surge in violence in recent months has been attributed to a power struggle between the dominant two, the Los Pelones and Los Compich gangs. Their main criminal activities are drugs, extortion, human trafficking, and money laundering.

Despite the threat of cartel violence, the Mayan Riviera remains a hugely popular tourist centre with more than 500,000 British tourists staying in Cancun and other beachfront towns. 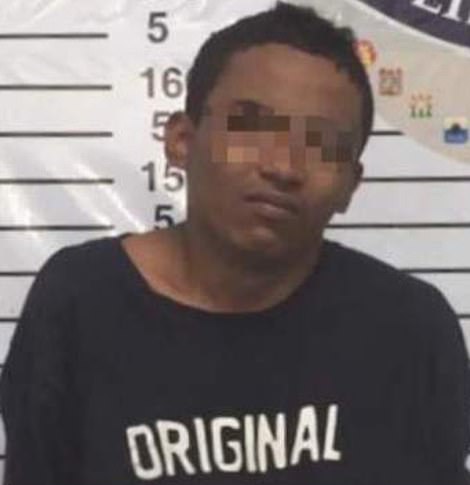 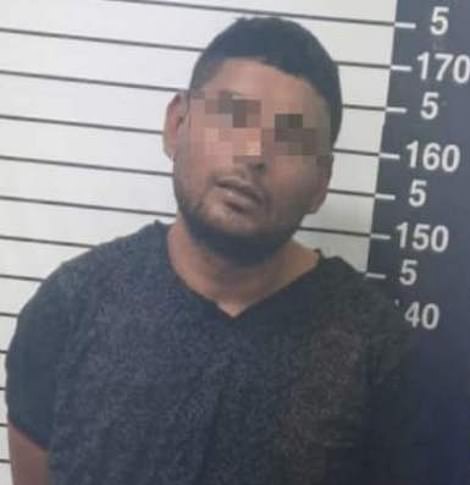 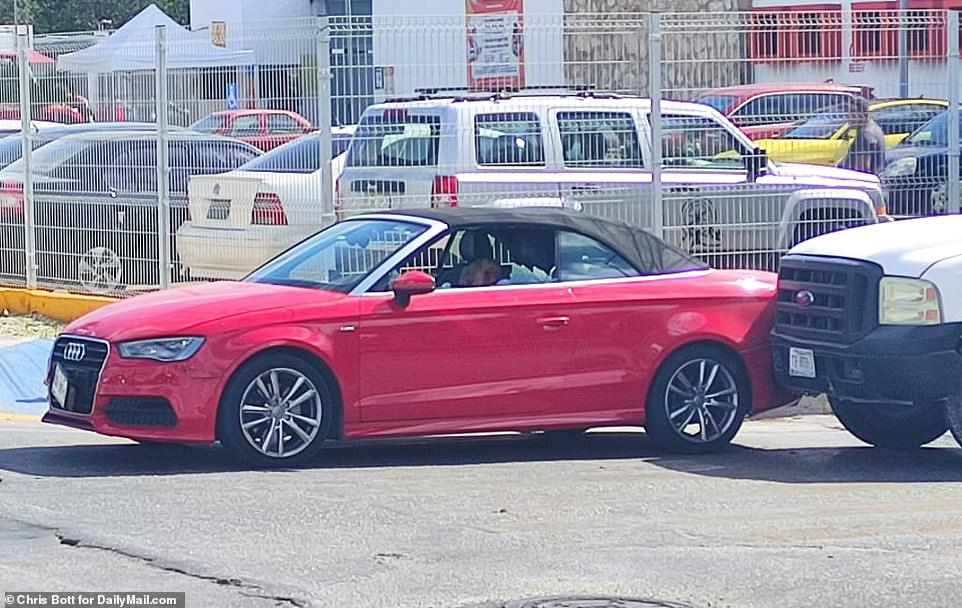 A police source into the murder (above) told MailOnline: ‘Everything in the investigation so far points to extortion and the earlier death of his business partner. They are connected. ‘We are still gathering evidence. One man has been charged and we are proceeding with a court appearance. The other person arrested is a minor and has appeared at a juvenile hearing.’ 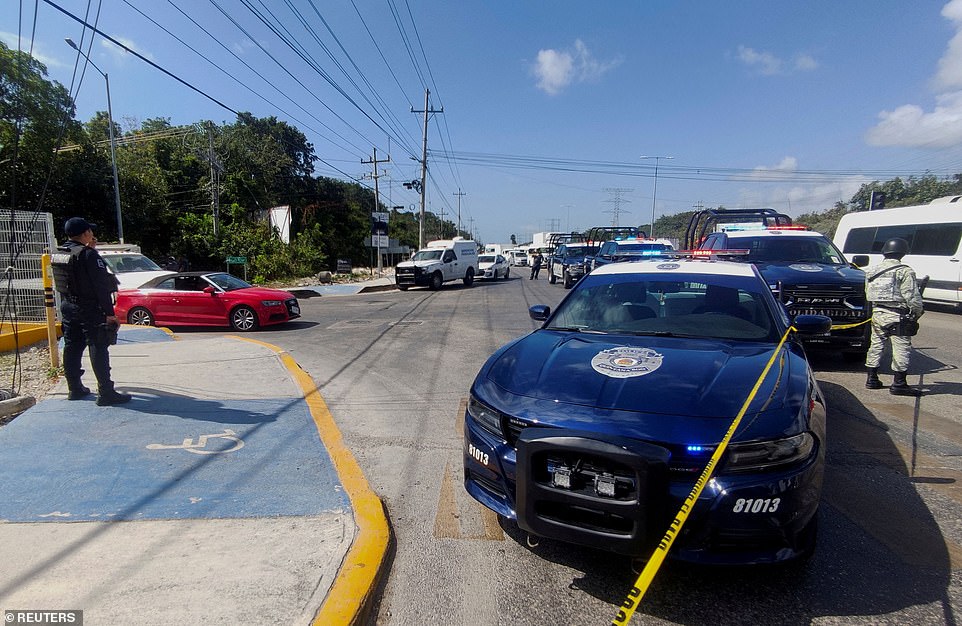 Quintana Roo State Prosecutor Oscar Montes de Oca Rosales confirmed that in the past Mr Cleave had been threatened by drug dealers. Pictured: The crime scene after Mr Cleave’s body was found in his Audi in Playa del Carmen

Locals in Playa del Carmen said killing among the cartels is an everyday occurrence and although 650 people were murdered in the state of Quintana Roo last year most of the killings were away from tourist areas. But the violence is increasingly spreading to the tourist areas.

Last month the manager of a well-known beach club in Playa del Carmen was shot dead by three members of The Los Pelones gang in a brazen attack. The killers arrived on jet skis and later fled, only to be arrested and charged.

In November 2021, a shootout between rival gangs resulted in the killing of two gangsters on a Cancun tourist beach.

Two weeks before that an American and German tourist were caught in the crossfire of a gang battle in Tulum and shot dead.

Mexico’s public security service says between January and September 2021, the murder rate rose 80 per cent from the same period in the previous year.

In response to the violence, the Mexican government announced that the National Guard will deploy 1,500 soldiers to protect the tourist areas of Quintana Roo as part of the newly formed Tourist Security Battalion.

President Andrés Manuel López Obrador said the region’s recent violence cannot be repeated while stating that the new battalion’s presence would be permanent, and its role would focus on intelligence work.