The Russian military has now set its sights on western Ukraine after Moscow’s forces hit the city of Lviv with airstrikes in the early hours of this morning. Andriy Sadovyi, mayor of Lviv, said two Russian missiles launched from the Black Sea had destroyed an aircraft repair facility and a bus garage close to the airport, but there were no immediate reports of casualties, because both facilities were shut down. Lviv had been safe from Russia’s attacks until now, with Kyiv and Kharkiv being the primary targets of invading forces. More than three million people have now fled Ukraine because of the Russian invasion, according to the United Nations.

Most have gone to neighbouring countries such as Poland, Hungary and Slovakia.

However, many Ukrainians have decided to stay in the country – including Inna Sovsun – an MP in the country’s Parliament and deputy leader of the opposition party Voice.

She explained how her son was taken to safety in the west of Ukraine, but at times has not known if her father is alive.

She said: “My family is in different places right now, my nine-year-old son was taken to western Ukraine by my ex-husband, the father of my child.

“My dad also took my mum to western Ukraine, and the next day he came back.

“My boyfriend was in the army before, but he has now rejoined. I am in touch with my boyfriend but I do not know exactly where he is, I get messages just so I know he is alive.

“My dad was in the area near Kyiv, where the biggest battles are. We lost connection with him and he was not responding to phone calls for three days.

“That made me and my mum go a bit crazy because we didn’t know if he was alive. There are Russian tanks in that area. Luckily we now know he is ok, but there is this crazy fear in my heart because I didn’t know if my dad was alive.

“There are so many people who can’t know if their loved ones are alive.

“My situation is like this – I am extremely angry about all of this. I haven’t seen my son for eight days now, he called me several days ago and asked ‘Mum, when shall I see you?’

“That’s when I started crying because I couldn’t answer that question.”

Ukraine and Russia have engaged in multiple rounds of peace talks, but so far no concrete agreement has been reached.

On Thursday afternoon, President Vladimir Putin rang the Turkish President, Recep Tayyip Erdogan, and told him what Russia’s precise demands were for a peace deal with Ukraine.

Ukraine would have to undergo a disarmament process to ensure it wasn’t a threat to Russia. Also, the Kremlin would demand protection for the Russian language in Ukraine.

Mr Kalin also suggested negotiations would possibly have to take place over the status of Crimea and the Donbas region.

Putin appears to be feeling the pressure at home as he hits out at those in Russia who have opposed the invasion.

He branded opponents of the war “scum” and “traitors”.

The Russian President said: “The Russian people will always be able to distinguish true patriots from scum and traitors and will simply spit them out like an insect in their mouth onto the pavement.”

Brexit: Britain WILL leave EU by October 31 despite asking for delay, Gove insists as EU give Boris 48-hour lifeline 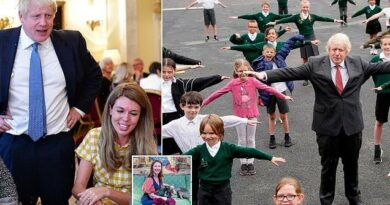