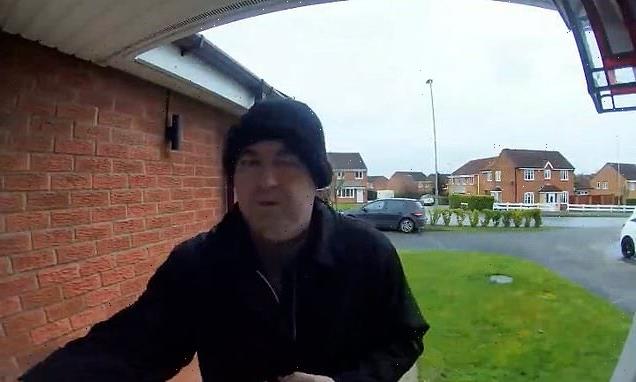 An Evri delivery driver has been caught on camera casually throwing packages onto a doorstep at the same address two days in a row.

The deliveryman nonchalantly took pictures of the drop-offs as he walked away, with one social media user joking that he was ‘perfecting the no-look photo’.

In the first video , the driver drops the package at the door before knocking once and walking off while taking a photo then scratching his backside.

At the same address the following day, the driver casually drops another package at the door then walks off while taking a photo of the delivery without even looking at the house. 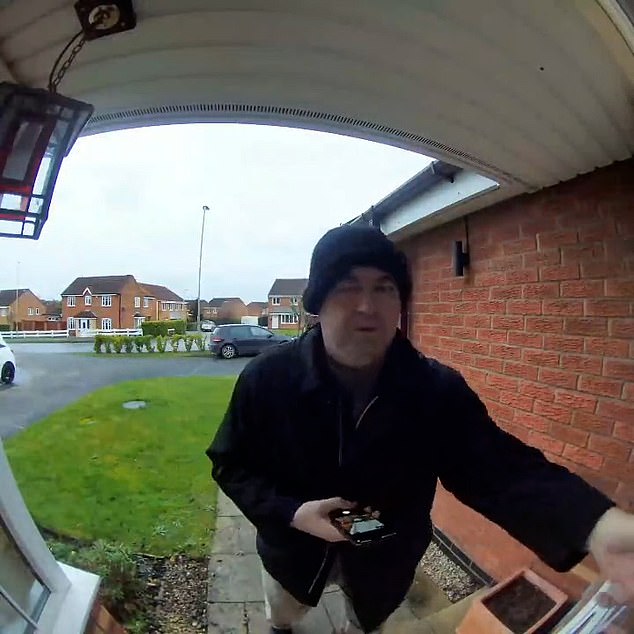 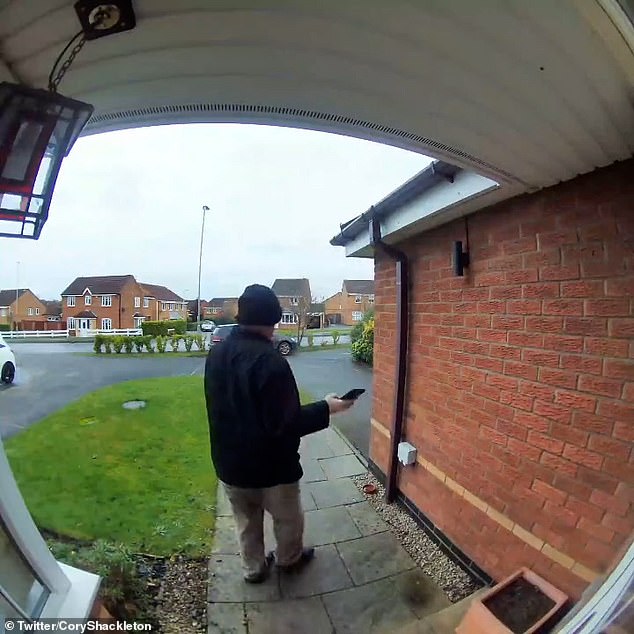 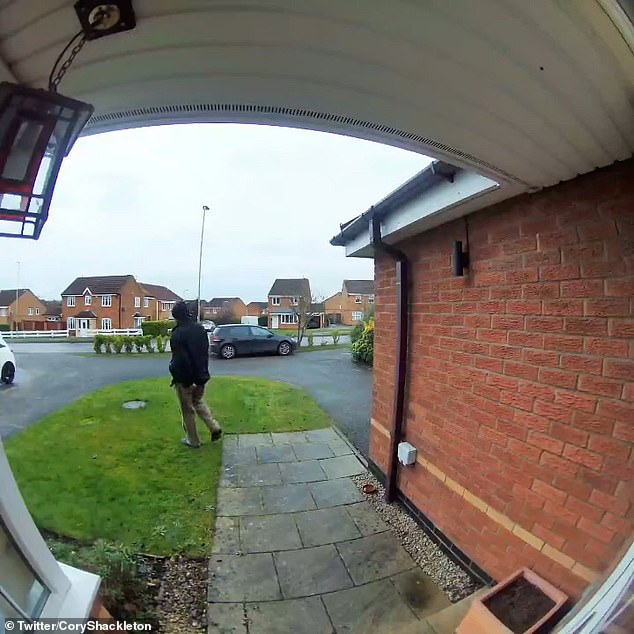 After the first delivery, the man scratched his backside as he walked away from the door

The laid-back drop-offs prompted some on social media to share their own stories of questionable deliveries by Evri and other companies.

One user responded to the videos by saying: ‘Wow, what a service.’

Another said: ‘That was very professional by their standards.’

A third said: ‘Wow, he’s perfected the “no look photo”.

Some described experiences with Evri deliveries which had been left frustrated, including parcels not being delivered at all.

One customer told MailOnline she was still waiting for her Christmas dinner to be delivered.

Another customer said online: ‘Evri just threw mine in a blue bin on the street, didn’t bother to put a note through the door to tell me.

‘The bin men came and took the bin.’

A customer said on Twitter: ‘At least it was delivered [I’m] still waiting! Worst company ever!’

Another said: ‘The worst for us so far was Amazon, they left our delivery of a large bag of cat food on someone else’s stairs.’

One user was more complimentary to the Evri driver, saying: ‘Such a smooth delivery though. That’s class fair play to him got to earn his bacon ain’t he and get those deliveries over the line.’ 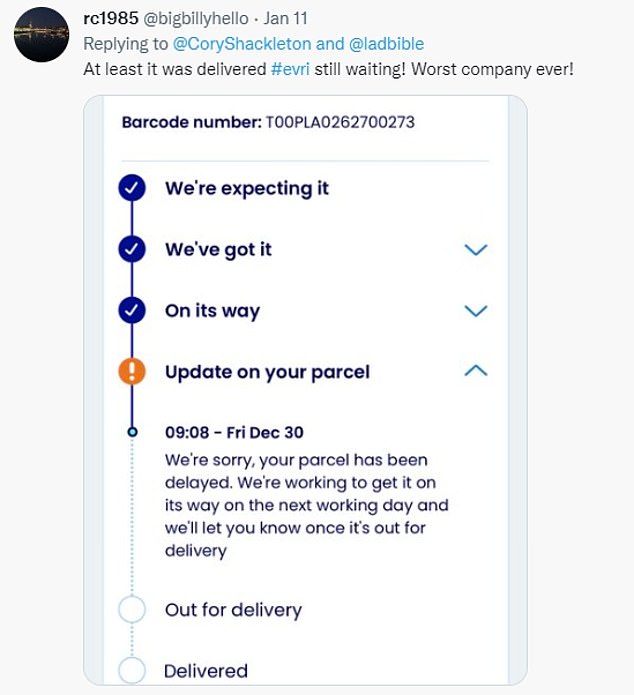 It comes after Labour MP Carolyn Harris questioned whether Evri should be investigated over its ‘poor customer service’ after the parcel firm apologised for ongoing UK-wide delays.

Ms Harris asked Prime Minister Rishi Sunak earlier this week if he should ‘take action’ and probe Evri, which previously operated under the name Hermes, after the company received more than 40,000 complaints.

Mr Sunak, noting that other Government ministers had ‘looked into this issue,’ seemingly dismissed the request, saying he would be ‘happy to write’ to other leaders once ‘we learn more about the situation.’

Ms Harris’ remarks come after Evri apologised to customers across the UK who are still waiting for delayed Christmas deliveries. The firm attributed staff shortages, Royal Mail strikes and bad weather to its problems and said it is working to sort them out. 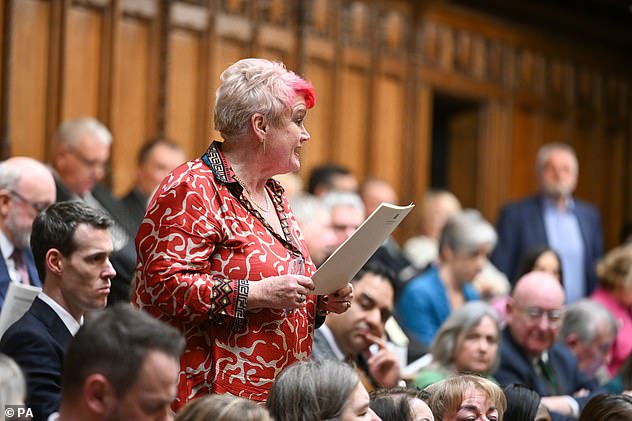 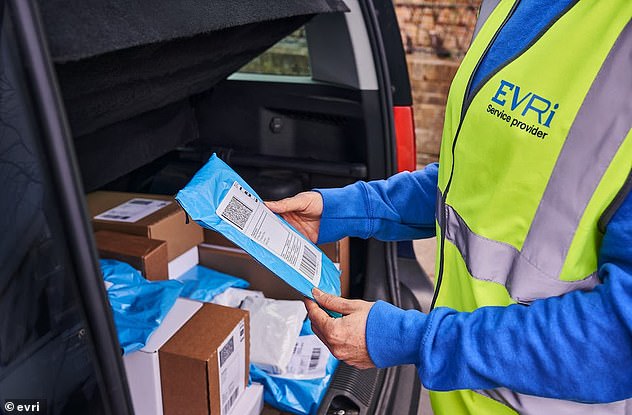 Evri, which previously operated under the name Hermes, received more than 40,000 complaints. Several customers across the UK are still waiting for delayed Christmas deliveries

During Prime Minister’s Questions, Ms Harris asked: ‘Does the Prime Minister believe that over 40,000 interactions by either social media, email or letter regarding the poor customer service and working conditions at the delivery company Evri warrants an investigation by the relevant Government department?

‘His ministers in BEIS [Department for Business, Energy and Industrial Strategy] think not. But I’m sure the Prime Minister would want the general public to believe that he at least is interested enough in this problem to take action.’

Mr Sunak responded to the query, saying: ‘I am aware that other Government ministers have looked into this issue and are currently considering the matter at hand.

‘I would be happy to write to her when we learn more about the situation.’

Several Evri customers are still waiting on their Christmas deliveries, but the company claims the backlog ‘should be cleared over the next few days.’

The company acknowledged ‘our service has not been as good as we would have liked’ and apologised for the problems that have directly impacted customers.

An Evri spokesperson said: ‘We are unable to comment on unverified social media posts but would urge Cory Shackleton to contact us or their retailer.’

Ask Amy: This year, everybody needs a book on their bed – The Denver Post

Ex-Army captain and actor reveal how they became transgender parents