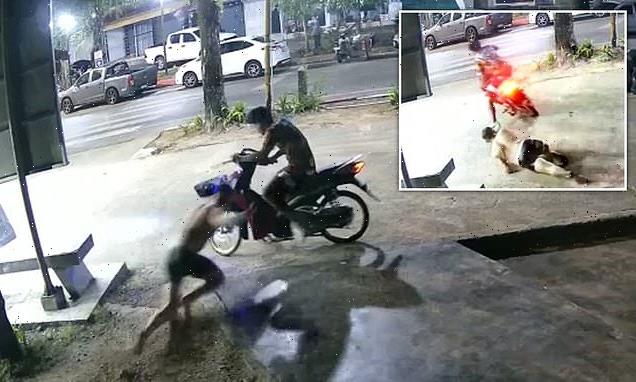 This is the dramatic moment a British tourist rugby tackled a moped ridden by a former boxer who stole his bag from a Thai beach.

Fraser William, 23, was paddling in the sea with his girlfriend when he saw the man run off with his belongings in Krabi, southern Thailand, in the early hours of Sunday, April 24.

He sprinted over to the road just as Suwit ‘Fai’ Phuengsom, 31, was trying to make a getaway on the motorcycle.

Undeterred, Mr William leapt at the moped and sent Suwit crashing to the ground. 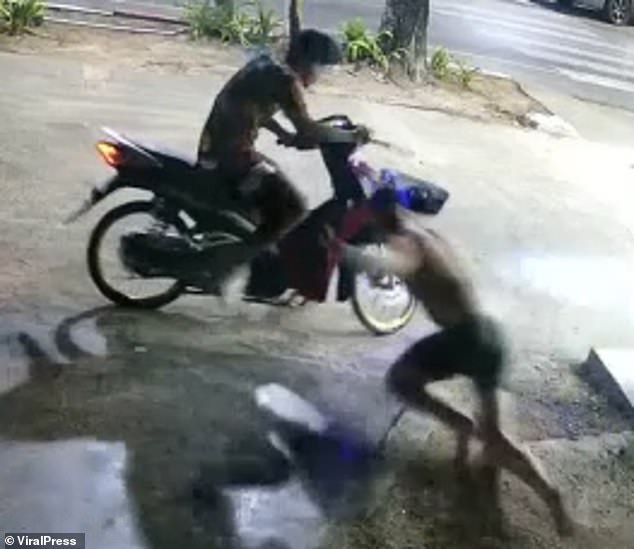 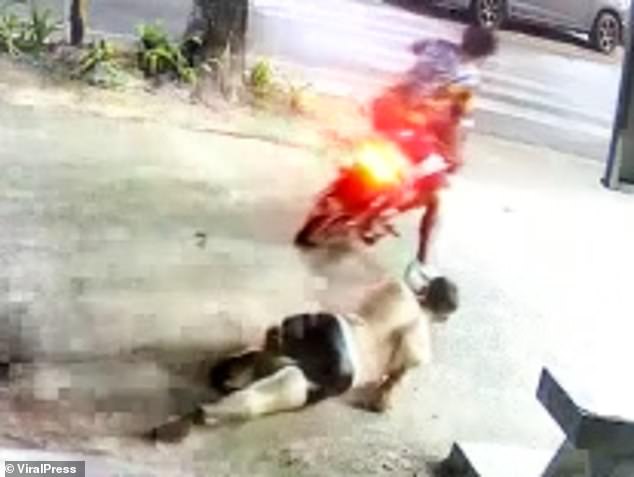 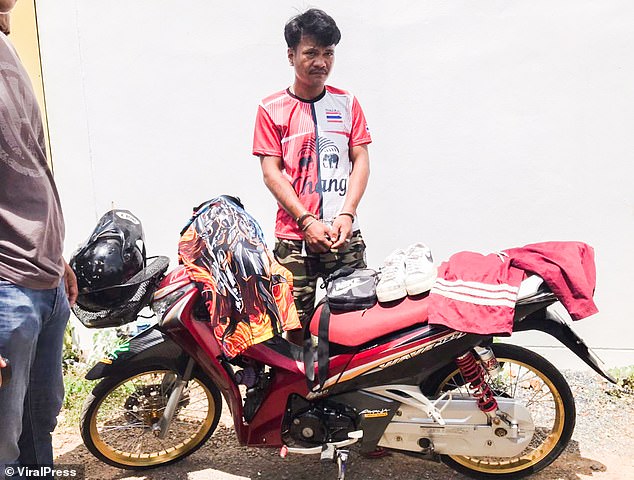 They went toe-to-toe while grappling with each other. Eventually, the martial arts expert wriggled free and escaped on foot.

Police arrested Suwit, a former professional Muay Thai boxer, on Tuesday, April 26, at a house in the Koh Lanta district.

Mr William told police he chased the thief without thinking.

He said: ‘I wasn’t afraid. I just wanted to stop him from taking my stuff.’

Mr William’s bag had around 5,000THB, credit cards and his hotel room keys.

Ao Nang police inspected the scene and went through the CCTV footage before finally identifying the suspect. 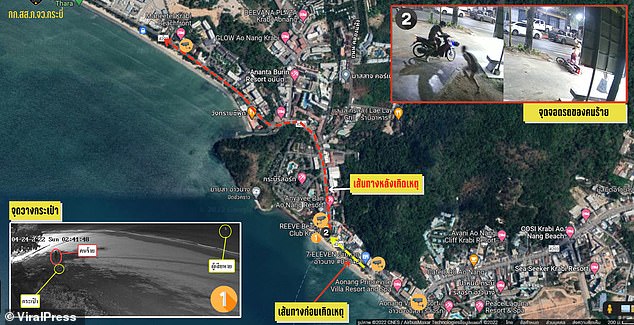 The theft took place in the popular resort of Ao Nang in the province of Krabi, southerm Thailand 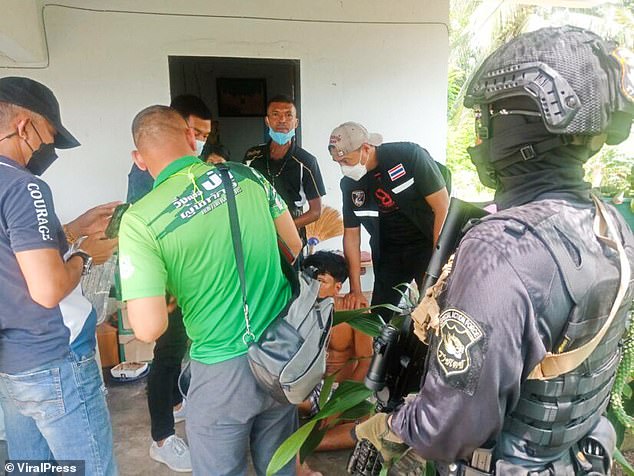 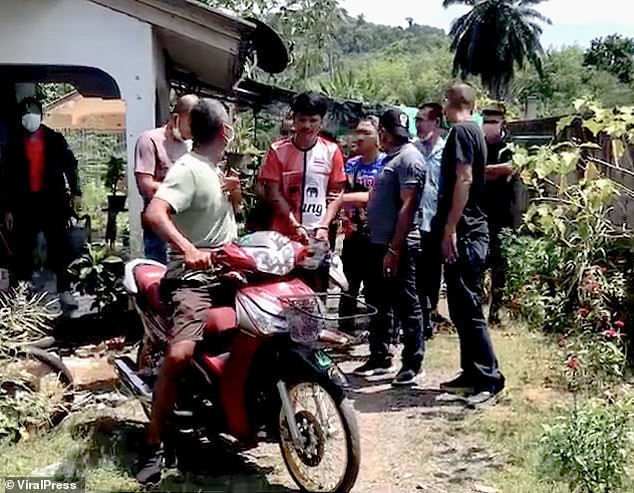 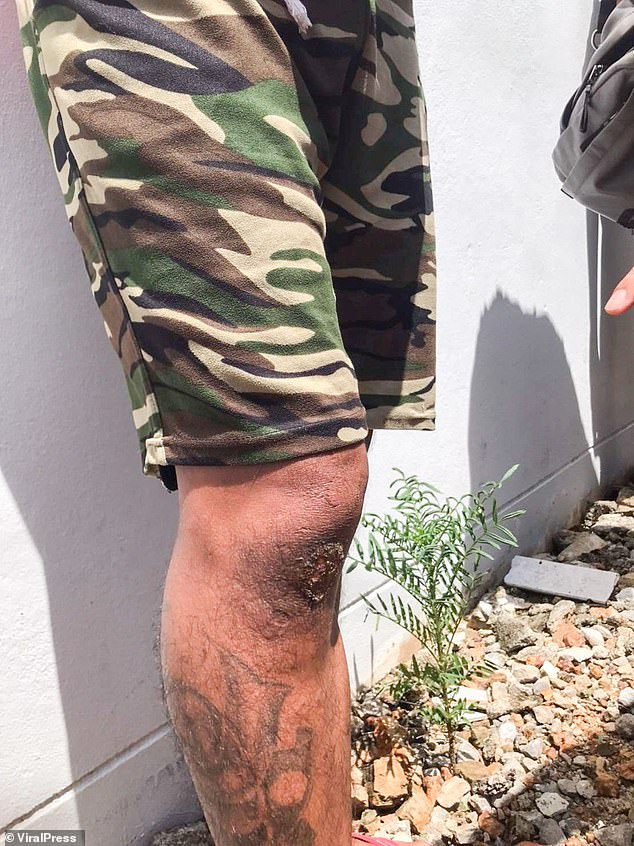 As well as his clothing and the moped, police also identified a knee injury Suwit had sustained after being rugby tackled by Mr William

During a search of his room, they found an outfit that matched the description and also found the same motorcycle seen in CCTV.

Police Colonel Somsak Thongkliang said: ‘Suwit still had an injury on his right knee while trying to escape from the tourist.

‘The suspect was a famous Thai Boxer with the nickname Den Saenchai. We have already detained him and brought him to Ao Nang police station for further legal proceedings.’

The suspect has been remanded in custody. 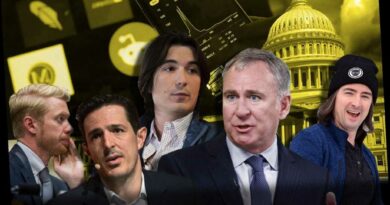