Home » World News » Calif. Brothers, 3 and 4, Vanished 8 Days Ago After Dad Said He Momentarily Left Them in Yard A California community is searching for answers in the disappearance of two brothers who vanished from their backyard.

On Dec. 21, 3-year-old Orson and 4-year-old Orrin West were playing with chalk in their family's California City backyard. According to their adoptive father, Trezol West, their adoptive mother, Jacqueline West, was inside wrapping presents while he was out back gathering fire wood.

“I came in the house,” Trezol West told KGET. “I saw them there, went into the house, came back out, didn’t see them there.”

When his wife confirmed that she hadn't seen the boys either, panic set in.

"I realized that I left the back gate open and I panicked and came inside the house, searched the house, me and my wife. Once that didn't pan out, I got in the van, I looked down the street in both directions, it was getting dark, getting cold," he said, 23ABC reports.

Trezol West said he immediately began searching the neighborhood for the pair and called police for help.

California City police and members of the community searched the area for the boys Monday night and all day Tuesday. The following day, the boys' biological mother arrived from Bakersfield to help search.

“I just had to be here because my babies are supposedly missing from this house,” Ryan Dean said, KGET reports. “So I just need to be here right now.”

According to KGET, authorities obtained a search warrant and have been gathering evidence from the family's home — even digging up the backyard. The FBI has also become involved in the investigation.

No charges have been filed.

Trezol and Jacqueline West have been cooperative, according to police, KGET reports. Their four other kids (two biological and two adopted) have been taken into protective custody by the authorities at this time.

The couple adopted Orrin and Orson in April 2019, the Mojave Desert News reports.

It's unclear why Dean lost custody of her sons but she told 23ABC she is working on getting her life back on track. She blames the Wests for the boys' disappearance, saying, "They did something. I feel like my kids are somewhere around here. I can feel it."

In response to her accusations, Trezol West told the station, "That's understandable. I would think the same thing. That's exactly the point, and if we can find our babies…that's all I want, is to find our babies." Jacqueline West added, "It's difficult. Everyone is making their own conclusions. They don't know anything.” 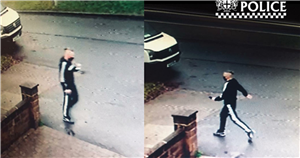 Pensioner, 92, tricked into paying £160 to get fake Covid jab in her own home