The Greek pilot who is accused of leading police on a wild goose chase after claiming his British wife was killed by robbers unwittingly gave away clues he was hiding something, according to a body language expert.

Babis Anagnostopoulos, 33, allegedly "confessed" to killing 20-year-old Caroline Crouch after giving an emotional press conference begging for her "killers" to be brought to justice.

The helicopter pilot is accused of suffocating his wife with a pillow after a row and killing their husky puppy in the harrowing incident in their home in in Glyka Nera, Athens on May 11.

He then is said to have made it look like a crime scene and claimed robbers had invaded their home, tied him up and killed Ms Crouch before making off with £10,000.

Anagnostopoulos has now been charged with murder.

Body language expert Judi James looked at his behaviour in a press conference and said there may have been telltale signs he had something to hide.

She told Sun Online he managed to speak about his wife's death and "steered clear of the kind of emotional breakdown that people might have been expecting".

Judi added: "His ability and his apparent keenness to talk about the murder in front of an intimidating jostle of press might have seemed unfeasible, but it could also have been seen at the time as brave."

The expert said the pilot "promoted himself as the heroic avenger of his wife’s death".

She added that as he went into the details of the robbery he allegedly fabricated, he "performs more eye cut-offs, looking down rather than straight ahead". Judi said this can be a way to hold back tears, or it can be used to try and hide something.

According to reports in Greek media, Anagnostopoulos allegedly confessed to police: "I killed her. I will tell you everything."

Police claim he said: "That night we were fighting early. At one point she threw the child in the crib and told me to leave the house.

"She pushed me and punched me. I lost my temper, I suffocated her with the pillow. Τhen I made up the robbery." 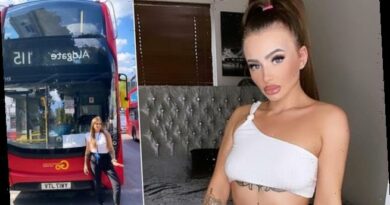 Bus driver, 24, constantly told she is 'too pretty' for her job