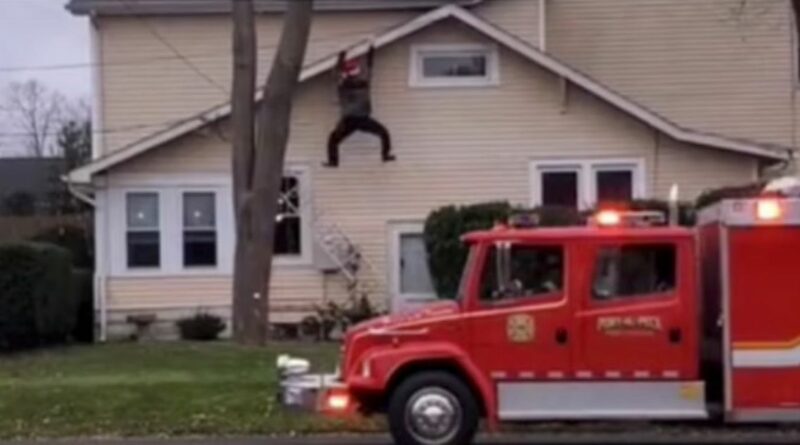 A US decorator has successfully played a Christmas prank on his neighbours a little too well after they believed it was a real person dangling from his roof.

The classic scene from the much loved Vacation series shows Clark Griswold, played by Chevy Chase, left clinging onto the roof after his ladder falls as he tries to fix up some Christmas decorations.

However, Mr Peterson’s recreation was considered so real by passers-by that his festive stunt landed him in trouble with authorities.

The prankster has been posting videos on TikTok about the display on his home, including how the mannequin was made.

On one of the videos, local firefighters were seen at Mr Peterson’s home but it is unclear if they were called to the scene or were passing by.

The decoration prank has become an internet sensation after it went viral with four million views on TikTok.

Mr Peterson later posted a video explaining how the figure works and revealed he bizarrely gave the mannequin a Michael Myers mask from the Halloween movie franchise.

He cleverly used a motor system to get the legs to move to further enhance the realism, combined with sound and lighting effects.

Mr Peterson also added a fallen ladder and half-done Christmas lights just like it looked in the movie.

Griswold's classic costumes from the series was also placed on the figure and his festive decoration prank was complete.

TikTok users were loving his creativity, despite his prank seemingly getting him into a little bit of trouble.

While Parcha commented: “Ha ha! As a 911 dispatcher I used to get calls every year about a house that hung a body for Halloween this is soooo much better.”

As jalem120 added: “Too much movement to be real…but it’s cool.”

Some TikTok users did bring up concerns over the noise of the display.

While tik.talkin commented: “All that noise would drive me mad.”

The Queen DIDN'T order the Governor-General to dismiss Gough Whitlam