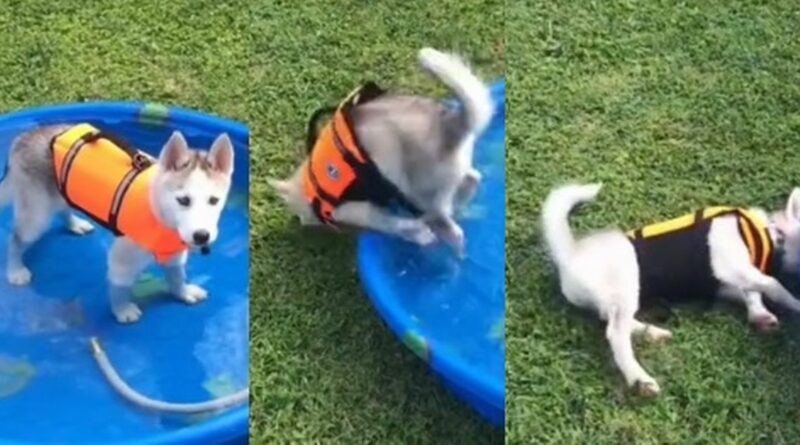 Everyone has been guilty of being a little clumsy and perhaps accident-prone in their younger days, and apparently this husky is no different.

This hilarious video shows just how unsteady on her feet the gorgeous dog used to be when she was a puppy, as she takes a tumble out of the paddling pool.

The adorable clip, which comes from TikTok user @mischaandnova, was a massive hit on the app, with over 672,000 views and almost 165,000 likes.

At the beginning of the video, we see the beautiful husky lounging on the sofa, as the caption describes how she is reminiscing about forgetting how to use her legs when she was younger.

We then flash back to her days as a puppy, watching her splash around in the paddling pool, fully equipped with a life jacket, before deciding it’s time to get out and dry off.

But when the clumsy pup attempts to hop out of the pool, she forgets to jump, and instead falls head over heels out of the water.

While she may have emerged unscathed, her pride was clearly hurt as she stayed down for a moment or two after the tumble.

It’s Dog Show week over at TeamDogs – a six-day celebration of what makes our pets special in the style of a virtual village fete without the muddy field and dodgy hotdogs.

Every day we will reveal a different category that we’d love you to enter by simply sharing a photo or video of your gorgeous dog.

Find out how to enter.

Viewers could relate to the experience, with one user commenting: “I have two and they are the biggest clowns when I come home. It makes me step back and appreciate them being there everyday.”

Another commenter wrote: “I love the life jacket in the paw deep water.”

A third added: “Huskies are so dramatic.”

And they aren't the first Husky to hit the headlines.

A pet husky was hailed a lifesaver after she sniffed out a newborn baby dumped in a park.

The tot, just hours old, was wrapped in a blanket and abandoned at The Mound in Kings Norton.

The owner of the pooch – named Hel – praised his adorable dog for discovering the vulnerable infant, adding that it could have been eaten alive by rats or foxes.

NHS Test & Trace does NOT work say whistle-blowers, who haven’t dealt with one Covid case