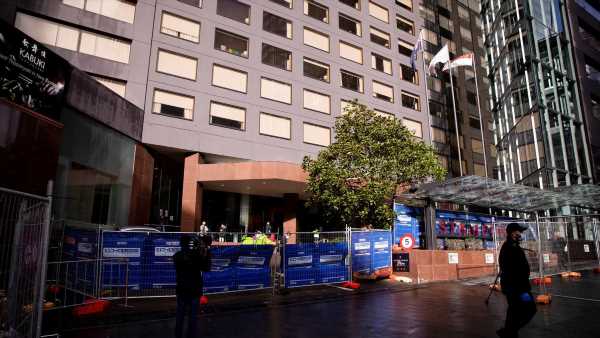 A man tried to get into the Stamford Plaza quarantine facility twice in one day.

Joint head of Managed Isolation and Quarantine (MIQ) Megan Main says the man claimed to be wanting to see a friend and did not know it was a managed isolation facility.

On August 21, the man first entered the resident carpark within the same hotel complex, which is not patrolled because it is a separate residents’ area.

The man then got into the facility through an emergency access panel.

“Once they entered this door, they were immediately stopped by a MIQ staff member,” Main said.

She says the man then entered the fire escape stairwell, climbed one floor and reached the ground floor, going through a swipe access-only door to enter the managed isolation facility lobby at a time when returnee departures were occurring.

The man was immediately stopped by the hotel duty manager, given a mask and taken to a separate area.

Police were called and the lobby closed to stop anyone from entering.

He was issued two warnings, one for unlawfully accessing the property and another for breaching Covid lockdown rules.

Health officials also told the man to self-isolate for 48 hours and get a Covid-19 test.

MIQ says they have made immediate changes to ensure the breach cannot happen again, including additional signage at the basement internal fire escape door that leads up into the facility.

“This signage now states that people are entering a Managed Isolation Facility and explains the fire escape is only to be used only in an emergency.An additional security guard has also been placed at the doorway to the carpark,” Main said.

In July last year, a Covid-positive man isolating at the Stamford Plaza slipped out of the facility to go to a nearby supermarket, prompting widespread condemnation and a review of security at mandatory quarantine and isolation hotels.

Who is Adam Price? Leader of Plaid Cymru – The Sun