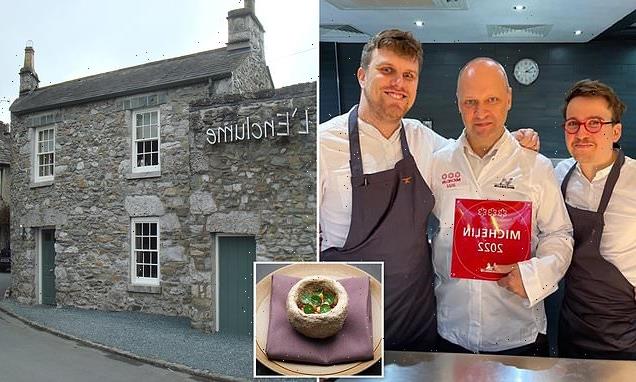 Diners have been left outraged after a restaurant hiked its taster menu to £250 after it became the first eaterie outside the South East to get a third Michelin star.

L’Enclume in Cartmel, Cumbria, run by Chef Patron Simon Rogan, was the only new restaurant in the UK to be awarded the prestigious third star this year — joining the likes of Restaurant Gordon Ramsay and Core by Clare Smyth.

But visitors have been left angry as prices are tasting menu prices are rising to £250 in June — from £75.

One reviewer on Tripadvisor called the 233 per cent rise ‘outrageous’ for the 16 dish experience. 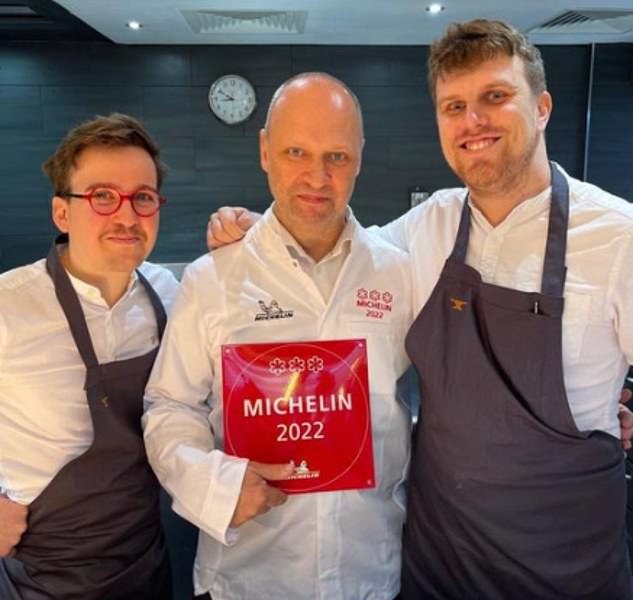 Diners have been left outraged after L’Enclume in Cartmel, Cumbria hiked its taster menu to £250. Pictured, Chef Simon Rogan (centre) with some of his team after being awarded three Michelin stars 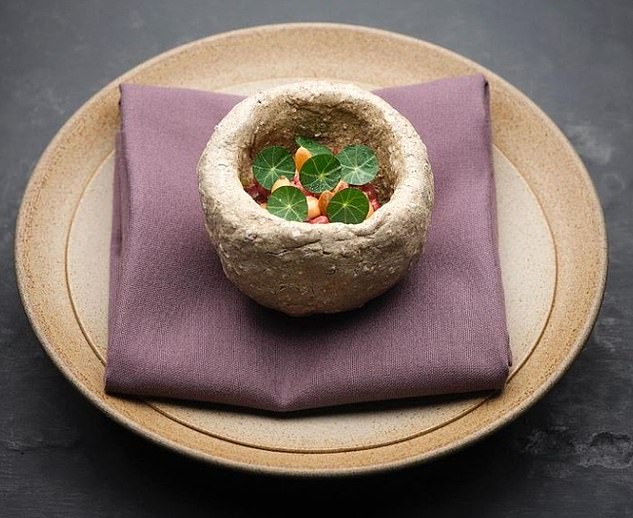 Sam Ward, managing director for Rogan’s restaurants, said that it was a ‘purely economical’ decision, and unrelated to the third Michelin star. Pictured, a dish from L’Enclume

Chris J from Worsley, Greater Manchester, said on the site that he had booked the lunch tasting menu for himself and his wife when it was priced at £75 each.

‘Following the award of the 3rd Michelin Star it went up to £100,’ he wrote. ‘I’ve now been informed the price has increased to £250 a head. I think this is outrageous for a pre-existing reservation.’

And David Simon, from St Ives, said he was ‘disappointed’ about the cost increase, and cancelled his booking.

‘We had been looking forward to our lunch so much but have had to cancel because of the big price increase,’ he wrote. 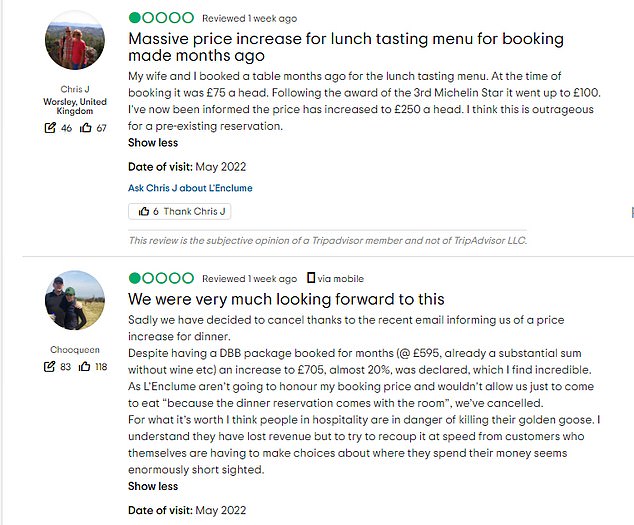 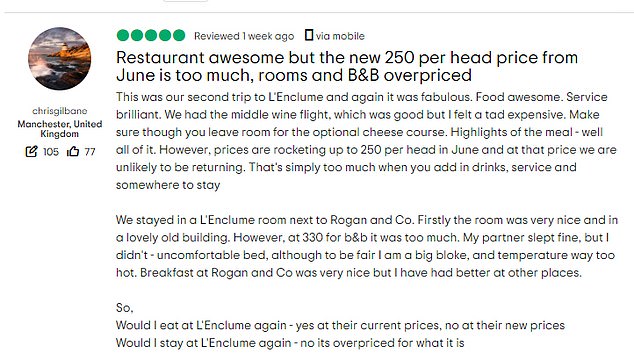 Chris Gilbane, from Manchester, praised the ‘awesome’ food but said he wouldn’t return due to the new pricing.

‘Prices are rocketing up to £250 per head in June and at that price we are unlikely to be returning,’ he wrote.

‘That’s simply too much when you add in drinks, service and somewhere to stay. Would I eat at L’Enclume again? Yes at their current prices, no at their new prices.’

He added that staying in the restaurant’s rooms cost an additional £330, saying ‘its overpriced for what it is’.

Another visitor cancelled their dinner, bed and breakfast package, saying it had risen from £595 to £705.

The restaurant  told the Times that the actual price increase for its menu had risen from £195 to £250.

Sam Ward, managing director for Rogan’s restaurants, told the paper that it was a ‘purely economical’ decision, and unrelated to the third Michelin star.

He said that restaurants needed to respond to rising costs, including staff wages and delivery fuel prices.

‘When you pay people properly and when you buy good ingredients, that’s what it costs,’ he told the paper.

‘We had to respond. The other option is that you don’t respond and you lose money.’ 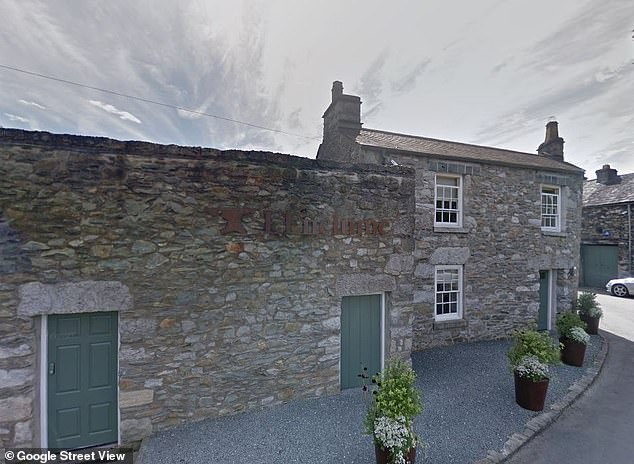 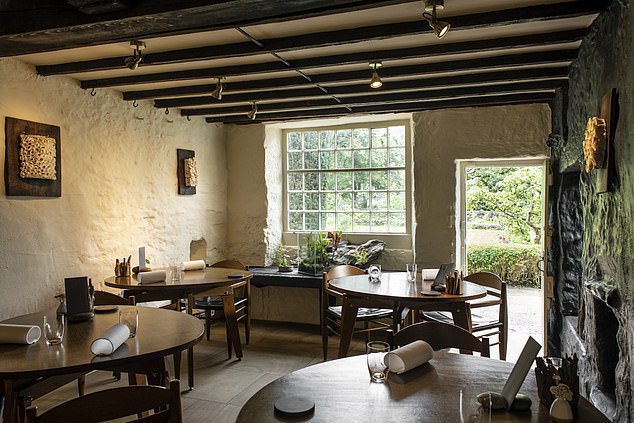 The Cumbrian restaurant’s menu varies seasonally, with chefs serving up produce grown at its farm in the Cartmel Valley

Mr Ward said that in March and April, the restaurant faced ‘astronomical’ costs and lost money although it was busy with bookings, adding that the industry faces small profit margins of around three to four per cent.

L’Enclume made history in February when it became the first restaurant outside of London or Berkshire to get three stars.

Its menu varies seasonally, with chefs serving up produce grown at its farm in the Cartmel Valley.

The restaurant serves the likes of Roe deer in coal oil, seaweed custard with beef broth and bone marrow, and Fritter of Duroc pig and smoked eel.

There are 132 restaurants in the world with three Michelin stars, seven of which are in the UK.

They include Alain Ducasse at the Dorchester and Hélène Darroze at The Connaught. The Araki in London previously held three stars but dramatically lost them all in 2020, while Chez Nico in Reading was one of the only restaurants outside of London to hold all three before closing in 1999.

The guide has previously been criticised for being too focused on London – with the majority of its British restaurants in the capital.