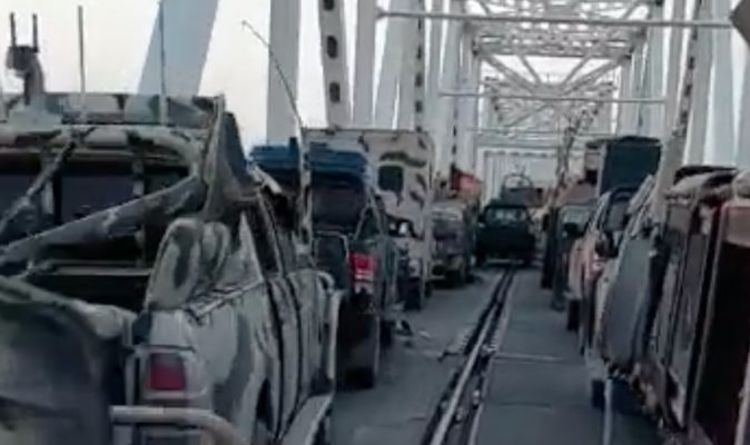 The footage circulating on social media appears to show Afghanistan’s ‘Friendship Bridge’ with Uzbekistan located in Balkh province, northern Afghanistan. The video shows lines of abandoned armoured vehicles, humvees, pickup trucks, and small lorries deserted with what appears to be gun turrets and just the Afghanistan flags left on them. The footage is reminiscent of scenes from the Soviet Union’s 1989 retreat from Afghanistan where thousands of military vehicles crossed over the very same bridge following their humiliating defeat to the Mujahideen. It follows reports that Afghan President Ashraf Ghani fled the country after the Taliban reclaimed Kabul and he is now believed to be in Uzbekistan.

Walking along the bridge, the individual filming the apocalyptic scenes narrates in local language what he sees.

Scanning over an array of vehicles, the video shows some pickup trucks still with turrets mounted on the back.

Abandoned military boots can also be seen scattered on the ground next to the vehicles.

Meanwhile, Afghan flags blow in the wind at the eerily quiet scene.

No Afghan soldiers can be seen in the footage or anywhere near the bridge.

The scene is reminiscent of the desperate retreat of the Soviet Union from Afghanistan in 1989 following their defeat to the country’s Mujahideen.

The footage comes as the Taliban have effectively taken control of Afghanistan after 20-years of western intervention in the country.

Chaotic scenes were unfolding on Sunday evening and Monday morning as thousands of desperate Afghan’s swarmed into Kabul’s Hamid Karzai international airport to try and board flights.

Taliban fighter says he was in ‘Guantanamo for eight years’

Heartbreaking footage shows how some were so desperate to leave that they climbed on the outside of a US military plane as it took off.

Moments later and thousands of feet in the air, a video captured the moment two figures fell to their deaths after clinging on for their lives.

It comes as a massive evacuation mission is underway by western nations to extract foreign nationals from the country as it teeters on the brink of collapse.

On Sunday, Prime Minister Boris Johnson rushed to evacuate British nationals from the city and confirmed the UK’s ambassador will remain to process visas for those trying to leave, while also admitting the US withdrawal had accelerated matters.

But while the British government vowed to evacuate hundreds of Britons and eligible Afghan nationals, their efforts have been suspended due to crowds of people invading the runway.

Despite admitting a new regime will be in place, the Prime Minister insisted the Taliban cannot be recognised as legitimate leaders of the state.

Taliban fighters have now declared “The war is over” after seizing the presidential palace, sending President Ashraf Ghani fleeing. Photos have now emerged of hundreds more Taliban fighters flooding into the capital Kabul as citizens scramble to escape at Kabul airport.

The declaration of victory follows a blistering advance across Afghanistan, which saw 20 provincial capitals fall to the Taliban in less than two weeks as the Afghan army failed to hold back their offensive.