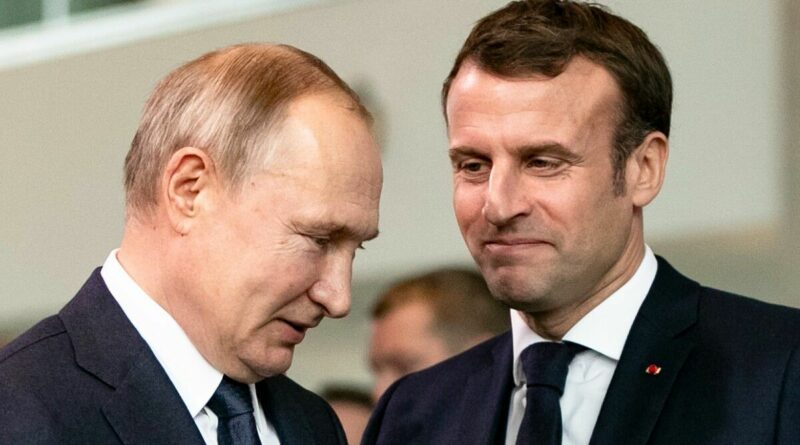 The French President will be joined by German Chancellor Olaf Scholz and Italian Prime Minister Mario Draghi, according to reports. Mr Macron has regularly tried to act as a broker between the West and Russian President Vladimir Putin since Russia invaded its neighbour on February 24.

The trip by the trio of EU state leaders will likely take place before a G7 summit in the Bavarian Alps scheduled for June 26.

German media has reported that Berlin and Paris have been discussing a joint visit for some time.

Mr Macron has reportedly insisted the trip should not take place until after the last round of France’s parliamentary elections on June 19.

The Élysée Palace is reported to have told French daily Le Parisien that Mr Macron will go to Ukraine when the visit will be most useful for Ukrainian President Volodymyr Zelensky.

Other reports suggest he may take advantage of a planned trip to Romania and Moldova, which share a border with Ukraine, this Tuesday and Wednesday to visit Kyiv.

Mr Macron could lose his outright majority in France’s parliament and the ability to push through his economic reform agenda with a free hand after a strong showing by a new left-wing alliance in the first round of voting.

The French president’s centrist alliance and the NUPES coalition led by the hard left veteran Jean-Luc Melenchon each won 26 percent of the vote on Sunday amid record abstentions.

For an outright majority his party needs 289 seats. Elabe shows that the left would secure 160-210 seats, a significant increase since 2017’s parliamentary election.

Mr Macron has sought to maintain dialogue with Putin since Moscow’s invasion of Ukraine in February.

His stance has been repeatedly criticised by some eastern and Baltic countries in Europe, as they see it as undermining efforts to push Putin to the negotiating table.

Earlier this month Mr Macron told regional newspapers in France: “We must not humiliate Russia so that the day when the fighting stops we can build an exit ramp through diplomatic means. I am convinced that it is France’s role to be a mediating power.”

Ukrainian foreign minister Dmitro Kuleba responded by saying: “Calls to avoid humiliation of Russia can only humiliate France and every other country that would call for it.

“Because it is Russia that humiliates itself. We all better focus on how to put Russia in its place. This will bring peace and save lives.”

Mr Macron has spoken regularly with Putin as part of efforts to broker a ceasefire and begin credible negotiations between Kyiv and Moscow.

Ahead of the war, the French president was pictured with Putin in Moscow at the end of a long table as Mr Macron made a futile bid to avert a conflict.

To date Mr Macron has had no tangible success to show for his efforts over the war.

Mr Scholz had previously stated he would only go to Kyiv if the visit had a specific purpose.

However, a spokesperson for the German government refused to confirm whether Mr Scholz would travel to Kyiv with Mr Macron and Mr Draghi.

Mr Scholz has not been to Kyiv since the start of the war.

He has faced criticism for his caution in supplying Ukraine with heavy arms such as tanks and howitzers, and has been forced to reject criticism Berlin is not showing leadership.

In Germany, frustration has also grown among Mr Scholz’s junior coalition partners over what they say are shortcomings in his leadership over Ukraine.

The visit raises the possibility that arms deliveries and Ukraine joining the EU will be discussed.

Mr Johnson made an unannounced visit to Ukraine as a “show of solidarity” with the war-torn country in April.

Mr Zelensky has hailed British leadership during talks on Friday with Defence Secretary Ben Wallace in the Ukrainian capital.

Ukraine’s president said: “I am grateful in general to Great Britain, the government and the prime minister.

“The war highlights who is our friend or friends, not just strategic friends, but real friends now. And I believe Great Britain is a friend.

“Arms, money and sanctions… these are three things in which Great Britain consistently demonstrates its leadership.”