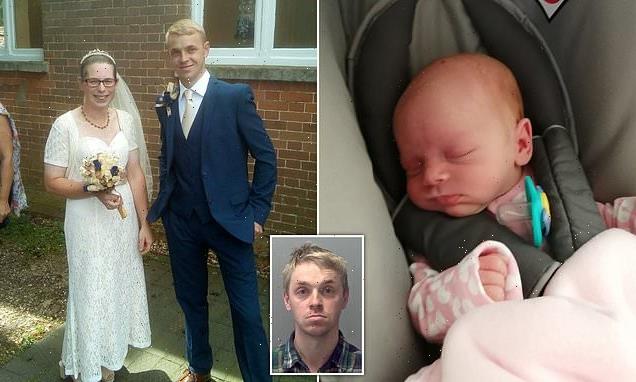 Farmer, 31, is jailed for 14 years for killing his 14-week-old daughter who suffered brain injury after being ‘violently shaken’ as mother is given community order for child cruelty

A father who violently shook his infant daughter has been jailed for 14 years for her manslaughter.

The 31-year-old, of Little Thetford, Cambridgeshire, was found guilty of manslaughter after jurors rejected his account that he ‘dropped Eleanor on her head having been distracted by the dogs barking’, the judge said.

The judge told Norwich Crown Court he was ‘sure’ Easey was the one who ‘inflicted all the serious injuries Eleanor suffered’, which included 31 rib fractures. 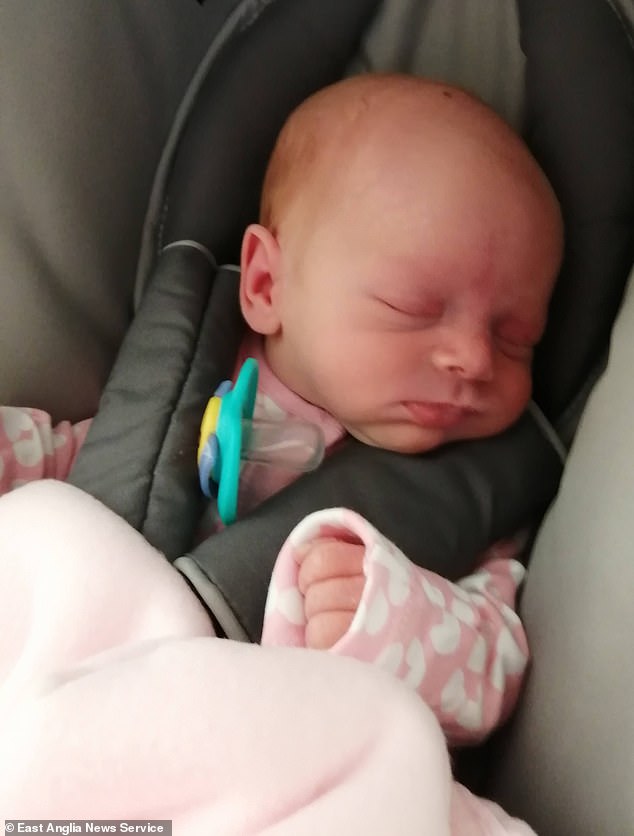 Baby Eleanor (pictured before her death in an image released by police) died at 14-weeks-old with three separate bleeds on her brain, and 31 fractures in her body. She was poorly nourished and significantly underweight 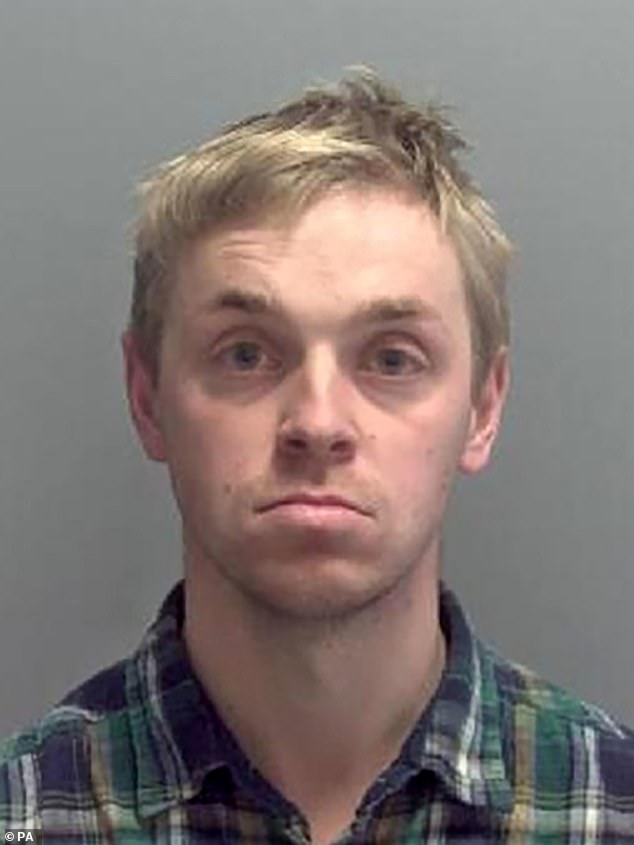 Christopher Easey, pictured, has been jailed for 14 years after being found guilty of Eleanor’s manslaughter

He said the girl’s mother, Carly Easey, ‘didn’t know (her) husband was injuring (their) baby and had done so on multiple occasions’.

Both 36-year-old Carly Easey, of Chedburgh, Suffolk, and Christopher Easey were found guilty of child cruelty.

An earlier court hearing was told the couple were being monitored by social services when Eleanor was killed and that Christopher had complained about how ‘annoying and unnecessary it was for social services to be involved in the family at all.’

Sally Howes QC, prosecuting, said a post-mortem examination recorded that Eleanor was poorly nourished, had a prominent ribcage and reduced muscle bulk in her limbs.

The judge said both parents had ‘at times given her diluted squash to drink instead of milk’, and described it as ‘wholly inappropriate’ that she was given a lick of a custard cream biscuit.

He said both parents had ‘abandoned’ Eleanor ‘on at least one occasion for a significant time’. 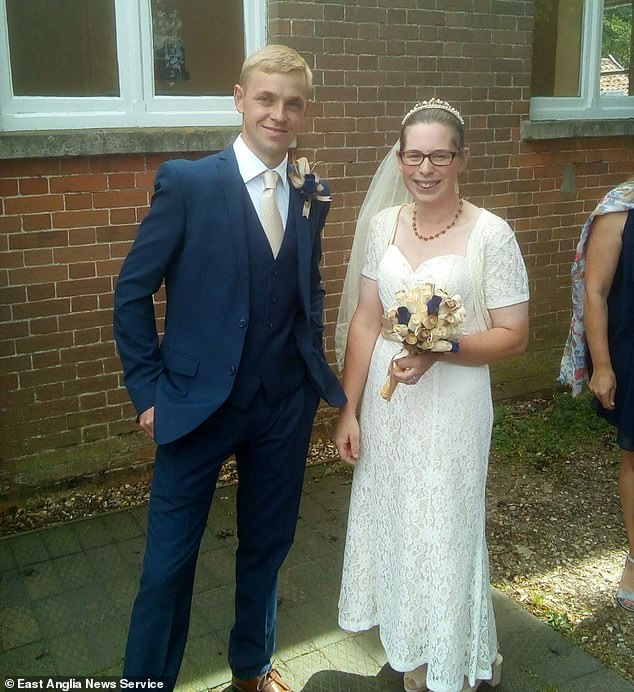 Christopher and Carley Easey, pictured here on their wedding day, were both convicted of child cruelty

Carly Easey was sentenced to a 12-month community order with requirements to take part in a specified programme of activities.

Elizabeth Marsh QC, mitigating for Carly Easey, said Eleanor ‘was killed through no action or inaction’ by her mother.

‘She feels extreme guilty for failing to protect her baby from the man who deceived her,’ she said.

Sally O’Neill QC, mitigating for Christopher Easey, said he will ‘carry to his grave… the knowledge what he did caused the injuries to his baby daughter’.

She described him as a ‘very inexperienced father’.

Eleanor was taken to hospital on December 18, 2019 after being found unresponsive at home.

A scan showed she had a significant head injury and recent bleeding between her skull and brain.

She was later transferred from hospital in Norwich to Addenbrooke’s Hospital in Cambridge, where doctors confirmed she had suffered a catastrophic brain injury.

Christopher Easey (left), 31, and his wife Carly (right), 36, from Morton on the Hill, Norfolk, were accused of inventing excuses to explain away bruises on their newborn Eleanor

Tests showed Eleanor had suffered bleeds to her brain on three separate occasions, the most recent within 48 hours of her being admitted to hospital.

A Home Office post-mortem examination established her cause of her death as a head injury.

An earlier court hearing was told the couple were being monitored by social services when Eleanor was killed.

Hospital staff had earlier raised safeguarding fears about Eleanor over concerns that Mrs Easey had ‘concealed’ her pregnancy.

They also feared that she had was not bonding normally with her baby in the days after her birth at the Queen Elizabeth Hospital in King’s Lynn, Norfolk.

Staff noticed that she was ‘anxious about coping with the demands of being a parent’ and were concerned that she did not want her baby to be brought to her bedside, leaving bottle feeding up to staff.

Mr Easey also lied to a midwife that he was a vet when he was a cattle stockman, said Ms Howes.

Timeline of Eleanor Easey’s death and her parents being charged

She added: ‘A picture appeared of a couple who would only accept what they wanted to accept and had a worrying tendency to live in their own self-deluded way.’

Mrs Easey declined mental health treatment when she was released from hospital on October 18, 2019, and appeared to ‘want to go back to her life before’.

Eleanor remained in neo-natal intensive care, but staff noted that her parents ‘did not visit her very much’.

Hospital staff referred the family to social services as a safeguarding case due to Mrs Easey having a concealed pregnancy.

Neither parent attended a meeting with a health visitor at the hospital on September 21, 2019, said Ms Howes.

Mr Easey claimed later in a phone call how ‘annoying and unnecessary it was for social services to be involved in the family at all.’

Eleanor was said to be in a healthy condition before she was allowed home on September 26, 2019.

A health visitor noted on several occasions that Eleanor has red marks and scratches on her face, but Mrs Easey insisted the injuries were caused by her baby’s fingernails.

She also blamed a bruise on her daughter’s cheek on the poorly fitting strap of her car seat when they had driven down a bumpy road.

As a result of the injury, the couple were told to take Eleanor to their GP, as is the procedure for an injury in a non-mobile baby.

The couple took her the next day to the surgery in Grimston, Norfolk, where the GP found a second bruise behind her right ear.

Eleanor was then taken to the paediatric ward at Queen Elizabeth Hospital where she was examined by three doctors and a staff nurse found two marks on her jaws and two near her ears.

The couple once again explained that the injuries had been caused by her slipping in the outsize car seat, and the doctors accepted their story was ‘plausible’, said Ms Howes.

Mr Easey was said to have explained away a third set of injuries when his daughter was found to have a ‘a yellowish bruise’ to her hairline. 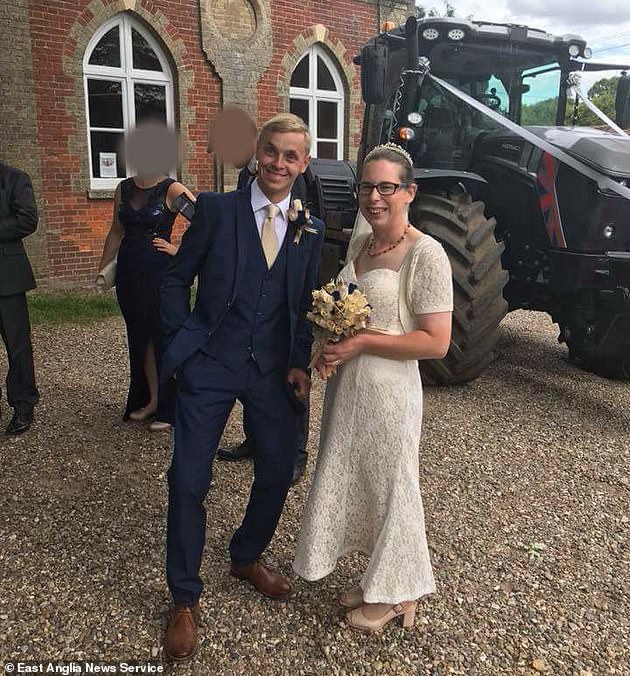 He told his employer that it was caused by a dog jumping up at Eleanor’s carry car seat at a Pets at Home store when he was buying a dog cage.

But police recovered CCTV images of him going to the store which showed no evidence of a dog jumping up.

Mr Easey drove his wife to work on the afternoon of December 18, claiming that he had Eleanor with him in his car.

But during the return home, he claimed he had to make an emergency stop when a car pulled out in front of him, meaning Eleanor’s head was jerked back in the car seat.

Mr Easey claimed that he tried to perform CPR on his daughter at his home after he dropped her.

Paramedics were called at 8.25pm on December 18, 2019, to reports that Eleanor was ‘struggling to breathe’ at their home in Morton on the Hill near Norwich, Norfolk.

They found her pale, floppy and lethargic with her eyes half open, a low heart rate and erratic breathing.

Doctors ruled she had a catastrophic brain injury which was incompatible with life and her life support was withdrawn two days later, said prosecutor Sally Howes QC. 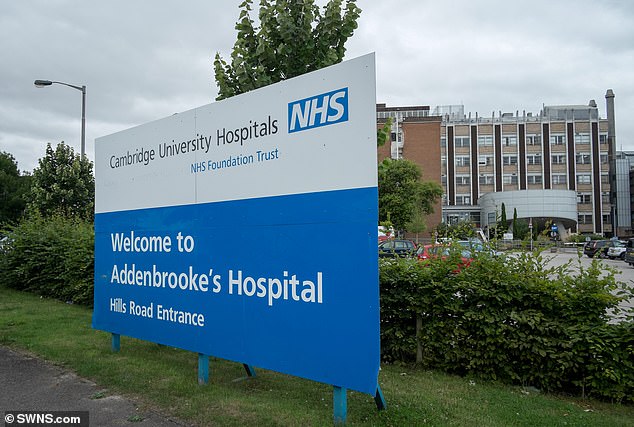 Mr Easey had driven his wife to work on that afternoon, claiming that he had Eleanor with him in his car.

But during the return home, he claimed he had to make an emergency stop when a car pulled out in front of him, meaning Eleanor’s head was jerked back in the car seat.

Mr Easey claimed that he tried to perform CPR on his daughter at his home after he dropped her.

He called an ambulance and later told paramedics on the way to hospital that he was used to performing CPR on cows, but had never done so on a human.

In later interviews with police, he claimed that he may have been over vigorous when doing chest compressions on her.

Mrs Easey also told officers about how she used to bounce around her daughter in a ‘horse game’ which she seemed to enjoy.

But Ms Howes said that police had spoken to other people who had expressed concern about the way the couple looked after their daughter, saying it was ‘wholly inappropriate’ for ‘a baby of her age and vulnerability’.