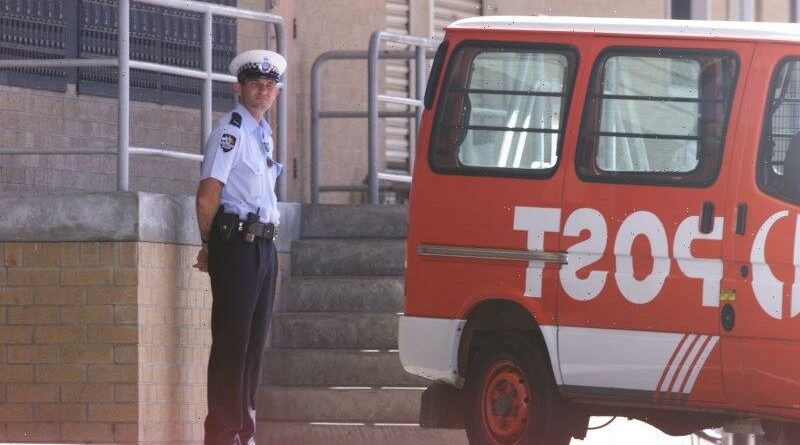 A man suspected of mailing 25 parcel bombs — one of which exploded injuring two postal workers in Canberra — was last night being hunted by police. 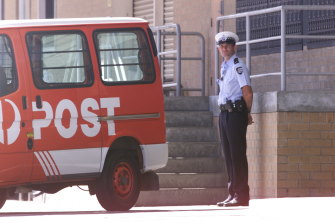 The search was mounted as a national alert was issued to all mail exchanges and to employees of the Australian Taxation Office and the Human Rights and Equal Opportunities Commission that they may have been targeted by the bomber.

The warning, which also directed employees of those government agencies not to open mail sent to their homes, came after it was learnt that one of the devices had been sent to the Sydney residence of the Commonwealth Privacy Commissioner, Ms Moira Scollay, on Tuesday.

The former Sex Discrimination Commissioner with the Human Rights and Equal Opportunities Commission, Ms Sue Walpole, received a letter bomb at her home in Richmond yesterday.

Police confirmed that a parcel bomb had also been found at midday yesterday at the Sydney residence of an employee of the Human Rights and Equal Opportunities Commission. 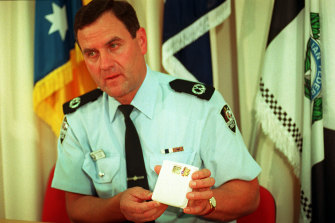 But Australian Taxation Office personnel in the ACT appear to have been the main focus of the bomber, police sources said, with most of the bombs being sent to the private addresses or offices of present or former employees.

One of the letter bombs is believed to have been addressed to the Canberra home of the taxation commissioner, Mr Michael Carmody.

Police believe the bomber may have had a feud with the Tax Office, and subsequently failed to gain redress after complaining to the Privacy Commissioner.

Police fear that an unknown number of explosive items may have slipped undetected into the national mail system and could be delivered to homes across Australia.

A description of a man wanted for questioning was released.

He was described as I 75cm, slim build and with short brown hair, possibly having a moustache and wearing blue jeans and a white short-sleeved shirt. He was believed to be driving blue 1985 Toyota Corona sedan with an ACT registration.

The drama began in the early hours of yesterday with the explosion of a bomb in the Canberra Mall Exchange at 12.35 am, and the discovery of 20 more unexploded packages in the exchange. Another two were believed to have been found in Sydney and one in Melbourne.

A Canberra post office employee suffered facial injuries when the package he was handling exploded as he tossed it into a steel bin in the sorting room.

The assistant commissioner, Mr Bill Stoll, launched a nationwide alert yesterday, saying the bombs were big enough to seriously injure anyone who was handling the packages when they went off.

“It was fortunate that the person was not handling it when it exploded,” he said. “One of the great causes of concern is that the material and the design and the capacity to construct such devices is freely available in the public domain on the internet.”

Last night a psychologist was helping police piece together a profile of the bomber. Police were also interviewing people to whom the letter bombs were addressed.

It is understood that the police suspect an internal complaint over an issue such as sexual harassment or the collection of family maintenance may have motivated the campaign.

Police in Canberra cordoned off the mail centre building in the Fyshwick light industrial area soon after the blast.

A scan of nearly a million items revealed another 20 of the parcels most of them addressed to people who had an existing or a past connection with the Australian Taxation Office. Mr Carmody was contacted and warnings were sent out to the Tax Office’s 17,000 employees.

Mr Stoll said last night the police had not made an arrest.