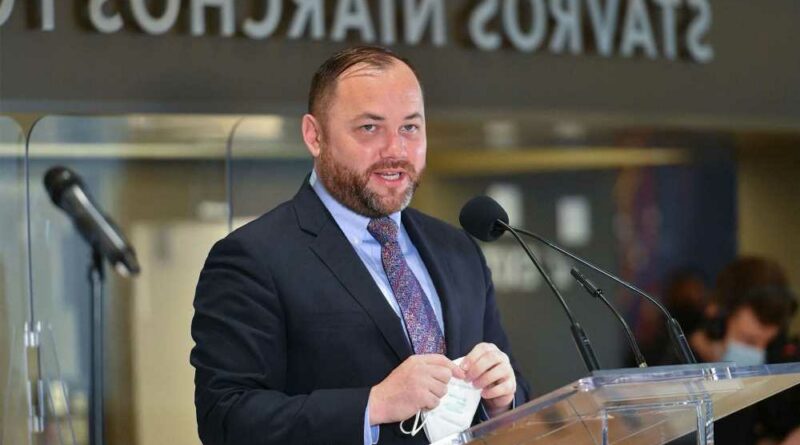 Corey Johnson accused of having rival bumped from church speech

Johnson, who launched his comptroller campaign after abandoning his mayoral aspirations this election cycle due to mental health struggles, has picked up a series of major endorsements. The City Council speaker has been at the top of the race in the limited available recent polling of the campaign, leading to him draw the lion’s share of attacks.

“We have to look at the money because . . . the city budget under Corey Johnson has gone up by $20 billion per year. And does the city feel $20 billion a year better?” said Caruso-Cabrera, during the WABC debate moderated by Dominic Carter.

“I don’t see how Corey Johnson, the current speaker of the City Council, thinks he can be a good overseer of money,” Caruso-Cabrera later said, invoking his record of allowing the Council to spend more.

Johnson fired back, saying he is “really proud of the investments” the City Council made during his time on the Council since 2014 and as speaker since 2018, such as summer youth programs and universal 3-K.

He noted that Caruso-Cabrera was a “lifelong Republican” until 2015, and said the former CNBC anchor advocated for the “abolition” of Social Security and Medicare.

“It is not surprising … that one of my opponents is talking about not wanting to invest in New Yorkers’ future,” said Johnson of Caruso-Cabrera, who unsuccessfully ran in the Democratic primary against Rep. Alexandria Ocasio-Cortez in 2020.

Johnson also faced criticism from his left from Lander, who accused the speaker of not allowing the Council to vote on bills he’s pushed, and punishing organizations that gave a thumbs down to his capital budget in 2020.

“Corey, in last year’s budget, you cut funding from VOCAL, a homeless organization, Opportunities for Better Tomorrow, a youth services group, even Prospect Park, in retaliation to opposition to your budget deal,” Lander, who was endorsed by AOC in March, said in the prelude to his question.

“How can New Yorkers count on you to be chief financial officer when you’ve used the budget time and time again to settle political scores?”

Johnson categorically denied the punitive funding cuts, which have been reported by Politico and alleged by other progressive politicians.

“That’s not true at all, and Brad knows it,” Johnson responded tersely.

In 2020, the “major deficit” meant that a lot of spending needed to be cut, Johnson explained, including from nonprofit organization in his district that he “loved” like those that help people with HIV and AIDS.

“Brad is distorting this, willfully,” Johnson claimed. “I had to cut things that I loved.”

But Johnson wasn’t on the defensive the entire debate.

Johnson took his allotted question to another candidate as an opportunity to attempt to stump his main antagonist, which proved successful. The Council speaker asked Caruso-Caberera to identify the city’s latest cash on hand balance, and the former journalist appeared not to know. She didn’t give a number, spoke aimlessly about her experience as a Latina in the business world, and accused Johnson of “trying to demean the one woman on the stage.”

“This city is a mess because of you,” Caruso-Cabrera said.

“I don’t think the question was answered,” Johnson responded plainly.

In the most recent assessment of the race, from NY1/ Ipsos, Johnson held a lead over the field with 18 percent of the vote, while Lander and Caruso-Cabrera were tied at 9 percent — but 44 percent of the Democratic likely voters in the poll were undecided, leaving the race wide open.

The Democratic primary for the citywide election will be held on June 22, with early voting beginning on Saturday.