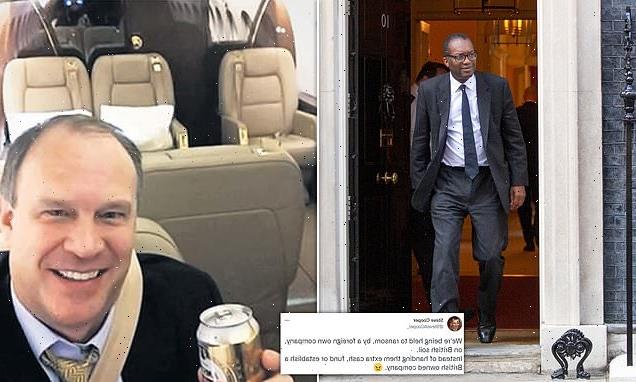 Three weeks to solve CO2 crisis: Kwasi Kwarteng insists ‘there is no question of UK writing cheques to US fertiliser firm indefinitely’… as photos emerge of millionaire US boss living the high life aboard private jet and luxury yacht

Britain has three weeks to solve the CO2 crisis that is threatening to decimate the food industry after Business Secretary Kwasi Kwarteng insisted the government wouldn’t continue ‘writing cheques indefinitely’ to a US fertiliser firm.

CF Industries, one of the biggest fertiliser businesses in the world, shut its two plants in Teesside and Cheshire after a large surge in gas prices meant continued production wouldn’t be profitable.

The plants produce 60 per cent of the UK’s carbon dioxide with the decision to close them blamed for plunging Britain into a CO2 crisis that threatened to force farmers to cull animals and leave supermarket shelves empty.

However, a deal is now being finalised that will see CF Industries paid millions of taxpayer cash to restart production.

The cash will be pocketed by the £7.6 billion firm and its millionaire CEO Tony Will – who had several meetings with Business Secretary Mr Kwarteng before agreeing to reopen the plants.

Will, who was paid £7 million last year, previously shared photos of himself aboard an Egyptian billionaire’s yacht in St Tropez and enjoying a beer on a private jet, according to the Times. He made his Instagram account private shortly before news of the government’s agreement with CF Industries was made public.

However, Mr Kwateng told MPs today that there was ‘no question of us writing a cheque to that company indefinitely’.

He explained: ‘In a critical intervention like that you have to have a way of exiting the arrangement. It’s not a case of just trying to nationalise it or supporting it indefinitely.

‘That’s why I think in a critical period we needed a very short-term arrangement.

‘I’m confident that we can get other sources of CO2 in that period, there was an immediate crisis and the deal that we reached solved the immediate problem.’

It comes after Britons reacted with fury today after the government announced it would be giving ‘tens of millions’ of taxpayer cash to CF Industries. 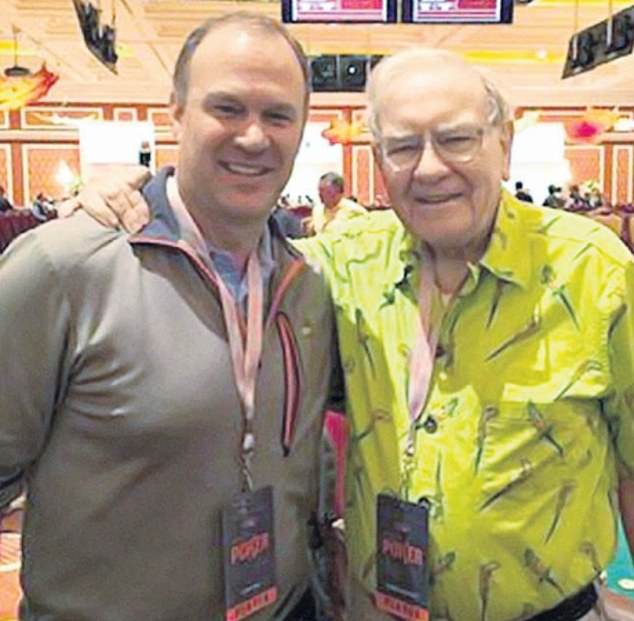 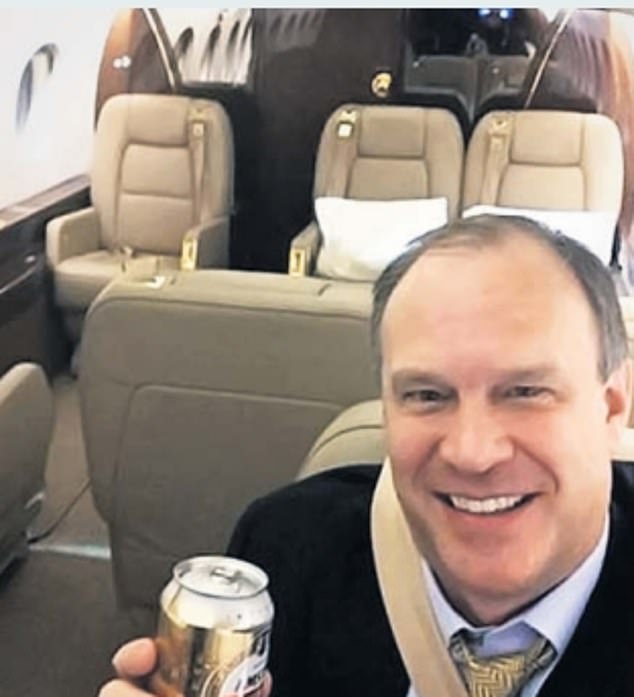 Will on a private jet with a beer. His plants produce 60 per cent of the UK’s carbon dioxide with the decision to close them blamed for plunging Britain into a CO2 crisis 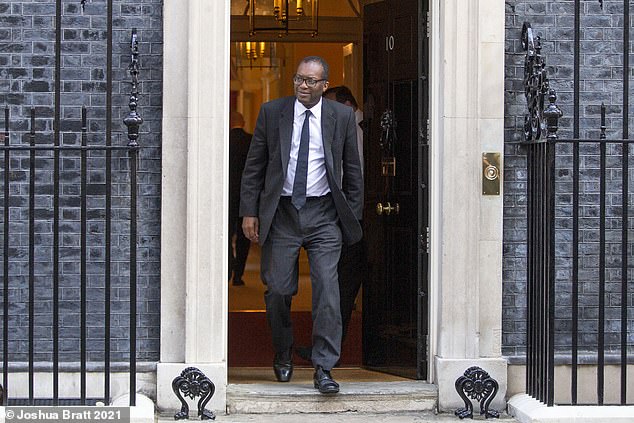 Secretary of State for Business, Energy and Industrial strategy Kwasi Kwarteng told MPs today that there was ‘no question of us writing a cheque to that company indefinitely’ 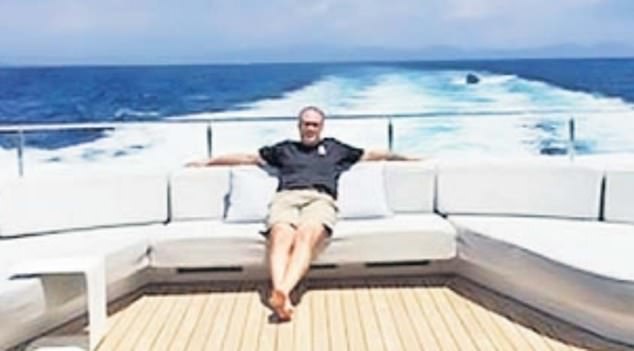 One wrote online: ‘We’re being held to ransom by a foreign owned company on British soil. Instead of handing them extra cash fund or establish a British-owned company.’

Another commented: ‘This morning it becomes clear that not only are taxpayers paying the CO2 company but consumers will pay higher food prices as well. Jackpot!

While a third asked: ‘Why is the UK taxpayer bailing out a US owned company?’

He claimed that ‘Christmas is safe’ from the impact of soaring energy prices, and the increase in the price of carbon dioxide would not have a ‘major impact on food prices’ because it was only a ‘tiny proportion’ of overall costs.

But the deal currently being hammered out by lawyers, was blasted by Tory MPs and free market organisations, who said reform of the market was required to prevent one firm having such a stranglehold.

CF Industries stopped production last week with its most recent statement saying it did not ‘have an estimate for when production will resume’.

The company has assets of $15 billion and is headquartered in Illinois. It is one of the biggest fertiliser firms in the world and was previously responsible for 25% of US fertilizer.

Will flew in to the UK on Sunday and had a meeting with Kwarteng.

The US millionaire – whose stock in the company is thought to be around $25 million – is said to have been unconvinced by efforts from the government to restart production at the firm’s UK plants over the high cost of natural gas.

Now, Will and CF Industries appear to have been persuaded – though the exact cost hasn’t been made clear.

He claimed that ‘Christmas is safe’ from the impact of soaring energy prices, and the increase in the price of carbon dioxide would not have a ‘major impact on food prices’ because it was only a ‘tiny proportion’ of overall costs.

But the deal currently being hammered out by lawyers, was blasted by Tory MPs and free market organisations, who said reform of the market was required to prevent one firm having such a hold on the market.

Former Tory leader Sir Iain Duncan Smith told the Sun: ‘This should be a very time-limited operation and must be suspended as soon as they can ship CO2 into the UK from elsewhere.

‘The bigger longer term problem is supply of energy – successive governments have taken their eye off the ball of energy security, which we are no longer producing here in this country. We won’t survive if we go on like this.’

CF Industries employs thousands of employees in the US, Canada and the UK.

Around 400 staff are based at the firm’s Cheshire site, where a million tonnes of fertiliser are produced per year, supplying the grass and farming sectors.

It employs around 200 staff on Teesside, and has a supply chain estimated to be worth £500m a year to the region’s economy. Earlier this year, it was revealed the firm was ‘evaluating its options’ in the North East after being slapped with a bill for millions by Ofgem.

CEO Will joined the firm in 2007 before eventually becoming its chief in 2014.

Will was previously the senior vice president, manufacturing and distribution, which put him in charge of the annual production of 15 million tons of fertiliser, distributed through 70 locations. 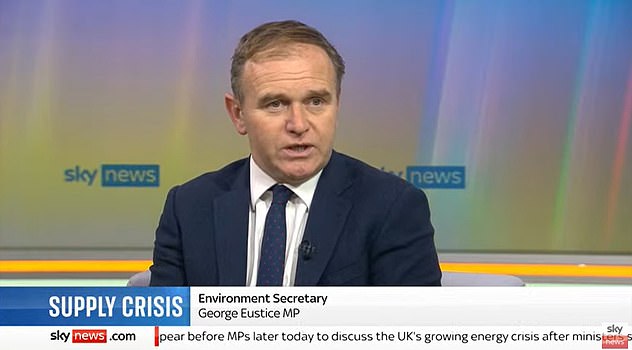 CO2 is used for everything from the humane slaughter of chickens and pigs, to putting the fizz in soft drinks and creating packaging that keeps foods fresh.

And it is critical for cooling nuclear reactors and as well as keeping certain medicines and vaccines cold.

Industry leaders had warned that the shortage could bring the entire meat processing system to a halt.

Mr Eustice told Sky News the deal is ‘going to be into many millions, possibly the tens of millions, but it is to underpin some of those fixed costs.’

He added: ‘It’s going to be temporary … at the end of the day we need the market to adjust.

Mr Eustice said there had been a ‘perfect storm’ caused by two plants in the UK and Norway being closed for maintenance at the same time as CF suspended operations of its two factories due to high energy costs.

He added: ‘The truth is if we did not act then, by this weekend, or certainly by the early part of next week, some of the poultry processing plants would need to close and then we would have animal welfare issues – because you would have lots of chickens on farms that couldn’t be slaughtered on time and would have to be euthanised on farms, we would have a similar situation with pigs.

‘There would have been a real animal welfare challenge here and a big disruption to the food supply chain, so we felt we needed to act.’

But Dr Eamonn Butler, director of the freemarket think tank the Adam Smith Institute, said: ‘Since we put the government in charge of setting prices on the energy industry, it has taken less than five years for a shortage.

‘Only the government could screw up the energy market then use taxpayer funds to bailout companies.

‘The merry-go-round of subsidy and regulation that gives security only to the most powerful and well connected at huge cost to everyone else has got to stop.’

Under the short-term arrangement, the taxpayer will financially support the factories so they can operate again.

Only one plant – the plant in Billingham – will reopen initially, Mr Eustice admitted, but he anticipated the other in Cheshire also restarting. It is expected to take up to 48 hours to start CO2 production. 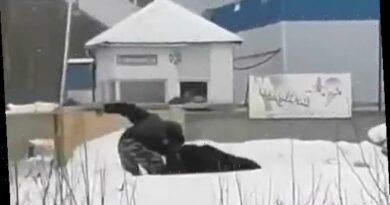