Home » World News » Get Cooking: Gaining an understanding of legumes 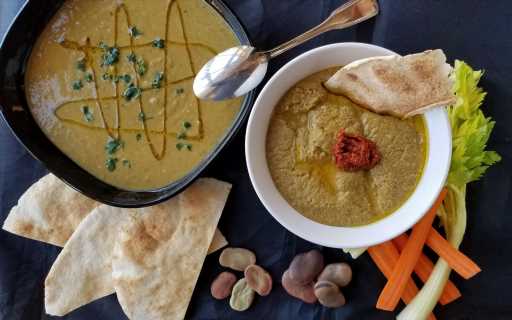 But to know that the words “beans” and “peas” cover almost all legumes, well, there’s the ticket.

Our beloved peanut is an outlier, because we don’t call it either a pea or a bean; but it is a legume. Likewise, vanilla or coffee “beans” aren’t legumes; they are, respectively, the fruit (of an orchid) and the seed (of a fruit).

An older term for legume is “pulse,” which you’ll see sometimes in writing on Indian cooking or hear on “Masterpiece.” Pulse comes from the Latin, “puls,” meaning pottage or porridge—the same word, just from different times in Western history—and tells us the predominant function of legumes in our diet for hundreds of years, cooked into a thick soup.

The word “soup” is interesting, too, coming as it does from “sop,” a piece of stale bread put at the bottom of a serving of puls in order to sop it up and extend it. French onion soup, with its round of toasted bread atop the broth, is the pineapple upside-down cake of porridges.

Anyway, legumes are up there as a super-nutritious plant food to eat. Soybeans contain upwards of 40 percent protein; lentils, 30 percent. Don’t need to tell you about their high percentages of fiber or complex carbohydrates. Burp. Pffft.

Our neighborhood of the globe gave to the rest of Earth a well-known and much-appreciated legume, Phaseolus vulgaris, native to Central and South America as a small black bean. It’s mutated and been farmed into many different beans, the most famous of which is the red kidney bean, but also the pinto, borlotti, cannellini, navy, black and many other beans used throughout Western cooking.

The Middle East and Mediterranean lands are fond of the legume Vicia faba, the fava bean, what the French call the “fève.”

The soybean (or soya or soya bean, as it is known elsewhere) and the lentil both come from Southeast Asia and, of course, are their gifts to us. The soybean isn’t eaten conventionally, cooked as most legumes are, but mostly processed or fermented into foods such as tofu (soybean curd), tempeh (soybean cake), soy sauce, miso, black bean paste and soymilk.

Lentils, Lens culinaris, are a backbone of Indian cooking, although they pick up their name from the Latin, “lens,” a word to describe the shape of most lentils. A legume is always double in form and easily split when skinned.

Hence, whole unpeeled lentils in Indian cooking are called “gram” and are roundish, while split and peeled lentils are called “dal” and are lens-shaped, mostly flat on one side and curved on the other. But, sorry, ya can’t see through ‘em.

Legumes have what’s known as “incomplete” proteins and, in cooking and eating diets, come begging for completion from something else, by and large a grain. The combinations of legumes and grains (usually grains special to an area of the globe) are legendary recipes: maize (corn) and beans in Mesoamerica, rice and soybeans in Asia, rice and lentils in India, and so on.

Looked at that way, the peanut butter and jelly sandwich is such a complementary combination of legume and grain, here wheat. Never before thought of it that way.

After years of cooking them, here’s what I’ve learned is best for the stove or oven. Excluding lentils, most dried legumes cook best after a night of soaking (brining, really) in deep salty water, three tablespoons non-iodized salt for every four quarts of water. Overnight, the sodium ions perform a swap-out with ions of magnesium and calcium in the molecules of pectin in the legumes’ skins and soften the skins. (The sodium does not salt the interior flesh.)

Test for doneness along the way. Depending on their age or how they’ve been dried, even large legumes can take as few as 30 minutes to cook through, to as long as several hours. They’re done when the flesh slips sweetly out of the skin and is velvety to the touch (of your fingers or mouth), not grainy, chalky or sandy.

Depending on the thickness of the skins on the dried beans, they may slip off while cooking (or, if you’re very lucky, after the overnight soaking), in which case you can slip them off or remove them with a skimmer. Or, after processing, you can push the bean mash through a fine sieve or a food mill, discarding the skins’ pulp. Serves 6 or more.

The night before cooking, place the beans in a large bowl and cover by 3 inches with ample cool water and the salt, stirred in. Soak overnight.

Drain the beans, place them in a large pot and recover them with ample water. Bring to a boil over high heat, then lower the heat to a slow simmer and cook them until their flesh is very soft (2 hours or more depending on the size and age of the favas). While cooking, add more boiling water if necessary to keep the beans submerged.

Meanwhile, in 2 tablespoons of the olive oil, soften the garlic, 3-4 minutes, making sure not to burn it. Set aside. When the beans are done cooking, drain them in a colander under which is a heat-proof bowl to catch the cooking liquid. Reserve the liquid. In a food processor and in batches, process the beans until smooth, facilitated with small amounts of the cooking liquid. Place the bean mash in a large bowl.

To one of the batches, add all the other ingredients except the cilantro, being sure not to forget the garlic and remaining olive oil. Fold together and blend all of the batches of bean mash.

To make bessara as a dip: Determine if the bean mash is smooth enough to your liking as a dip. If not, stir or whisk in small amounts of the reserved cooking liquid. Serve garnished with the cilantro or parsley, and with swirls of more olive oil, perhaps even with a dollop of harissa in the center.

To make bessara as a soup: Add enough of the reserved cooking liquid to achieve the consistency that you prefer in a soup. Serve hot in warmed bowls, garnished with the cilantro or parsley, and with swirls of more olive oil.

Nasa photographer picks his ten favourite pictures of the decade