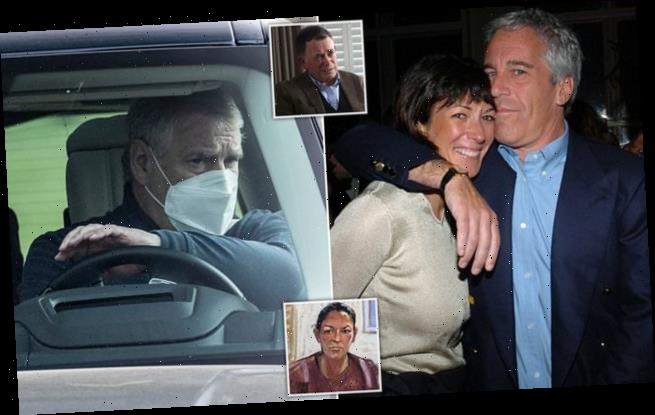 Ghislaine Maxwell will not call ‘self-destructive’ Prince Andrew as a defence witness at her trial in the summer, her brother claims

Ghislaine Maxwell will not call ‘self-destructive’ Prince Andrew as a defence witness at her trial in the summer, her brother has claimed.

Referring to the Duke of York’s infamous BBC television interview in 2019, Ian Maxwell told the Daily Telegraph: ‘It was the most remarkable piece of self-destruction.

‘I think he would be – as he proved in that interview – I think he’s a pretty serious hostage to fortune. I don’t think that’s going to happen.’ 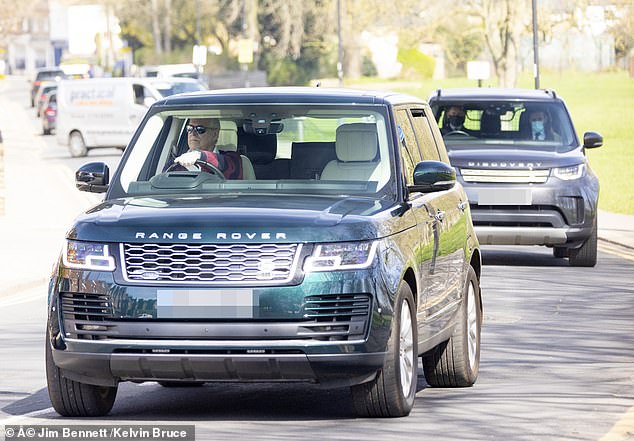 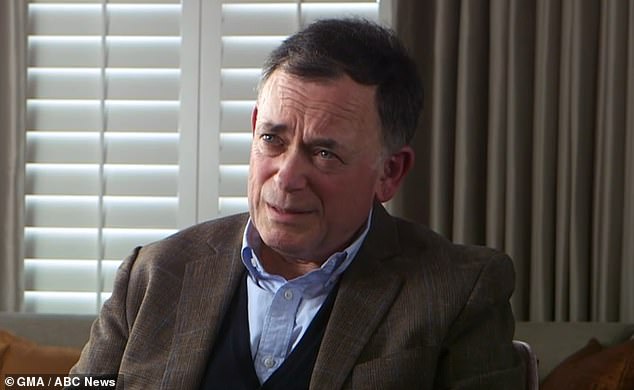 Ian Maxwell, pictured, has said his sister Ghislaine is a victim of hate and that she  is being treated far worse than convicted male sex offenders such as Bill Cosby and Harvey Weinstein

He claimed his younger sister, 59, was ‘a victim of hate’ because she is a woman and is being treated far worse than convicted male sex offenders such as Harvey Weinstein and Bill Cosby.

Maxwell is on suicide watch at a Brooklyn detention centre. She is accused of conspiring with Jeffrey Epstein, her former lover, to provide him with girls as young as 14 to abuse in the 1990s.

She has also been accused of participating in the abuse and of perjuring herself in a civil case. Maxwell denies all of the allegations.

Mr Maxwell, 64, drew comparisons between his sister’s case and that of Lord Bramall in a letter written to Joe Biden’s Attorney General, pleading for the US to give her a fair trial.

Lord Bramall, the former head of the Army and D-Day veteran, was jailed for 18 years after being falsely accused of being a paedophile.

Mr Maxwell befriended and worked with Lord Bramall at a military publishing company owned by the Maxwells – and is adamant his sister has also been falsely accused. 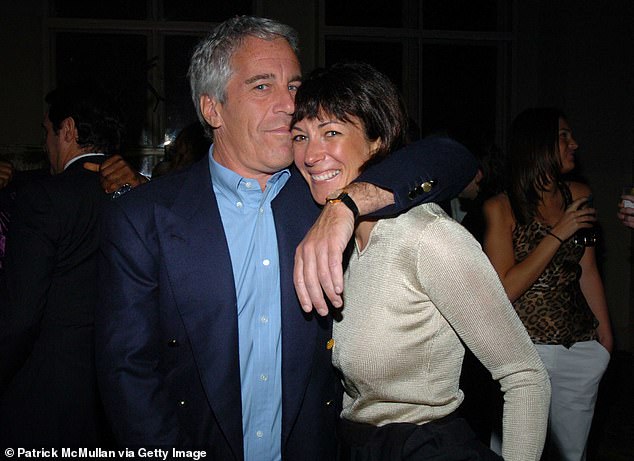 Maxwell, pictured with former lover Jeffrey Epstein, is on suicide watch at a detention centre

Ian Maxwell drew comparisons between his sister’s case and that of Lord Bramall. Pictured: a court sketch of Ghislaine Maxwell after she appeared via video link during her arraingment

Mr Maxwell said: ‘My sister has been banged up for 280 days. It really is grotesque.’

He claimed her depiction as a sexual predator and procurer of girls and young women is incorrect, adding it was ‘not in her nature to do any of these things’.

Mr Maxwell’s comments came as the Duke of York faced renewed calls to be questioned by the FBI after developments in the child sex inquiry expanded the breadth of the investigation.

Maxwell, who was Epstein’s longtime associate and former girlfriend, faces new charges of sex trafficking conspiracy and sex trafficking of a minor in the eight-count indictment, as well as earlier charges that include perjury.

An amended indictment against Maxwell now covers alleged crimes stretching from 1994 to 2004 in New York and Florida, including accusations that she paid the girl, known as Minor Victim-4, hundreds of dollars for each sexual act with Epstein. The girl was 14 when the grooming began, the indictment said.

She had previously pleaded not guilty to helping Epstein recruit and groom three teenage girls for sex between 1994 and 1997 in New York. Maxwell, 59, has been held in a jail in Brooklyn since her arrest last July. 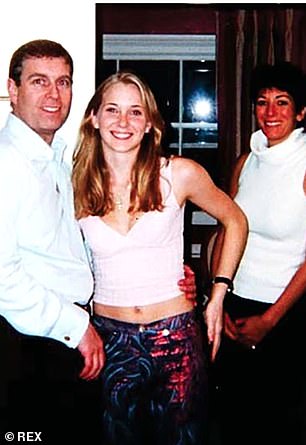 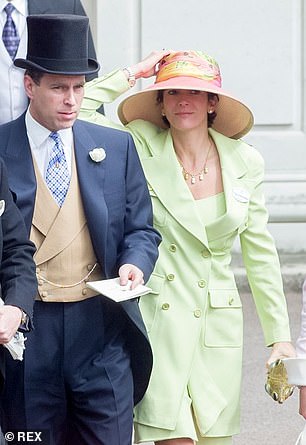 Ghislaine Maxwell faces new charges during a time when Prince Andrew became friends with Epstein and allegedly had sex three times with one of his victims, Virginia Roberts, allegations the Duke denies. Andrew is pictured with Virginia Roberts, aged 17, and Maxwell in 2001

Pictured: Prince Andrew leaves his home in the grounds of Windsor Castle as his friend Ghislaine Maxwell was charged with more offences in the US on Tuesday earlier this week

The time frame of the new allegations has expanded to between 1994 and ‘at least’ 2004, which covers the period where Epstein was associating with powerful men like Prince Andrew and Bill Clinton.

During this period Prince Andrew became friends with Epstein and allegedly had sex three times with one of his victims, Virginia Roberts, allegations the Duke denies.

Neither Prince Andrew or Mr Clinton is mentioned in the court documents but it significantly raises the prospect of them both being brought up at Maxwell’s trial.

Earlier this week, it was revealed that Ghislaine Maxwell claimed that her treatment in prison was so bad it would be ‘fit for Hannibal Lecter’.

Jeffrey Epstein’s alleged madam claimed that the conditions as she awaits trial would be appropriate for the fictional serial killer in ‘The Silence of the Lambs’.

But they are not appropriate for a ’59-year old woman who poses no threat to anyone’, Maxwell’s lawyers claimed. 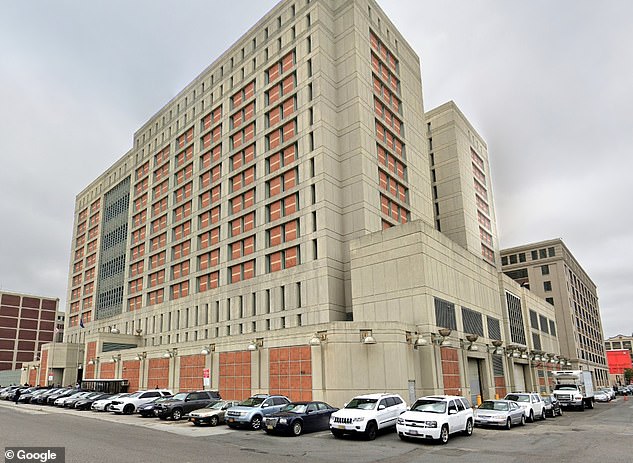 They suggested she was the victim of sexism because high-profile male prisoners who had been accused of serious crimes like Bill Cosby and mob boss John Gotti were given bail while she wasn’t.

The claim was made in a 31-page document filed in the Second Circuit appeal court in New York by Maxwell’s lawyers as they sought to overturn a judge’s rejection of her third attempt at bail.

Maxwell’s lawyers have repeatedly and vocally complained about her treatment in the Metropolitan Detention Center in Brooklyn, New York, where she is being held until trial, which is due to start in July.

They have said she is losing her hair and losing weight because the prison food is inedible.

According to court filings, the water in the taps is cloudy, Maxwell is kept in isolation and she is woken every 15 minutes to be searched by a flashlight.

The latest claims were made in a letter by David Oscar Markus, one of Maxwell’s lawyers, who called her conditions ‘nightmarish’.

Satanic animal killers ‘on rampage’ as corpses found next to pentagrams