A Hong Kong police officer has shot an apparently unarmed protester at close range in the stomach with a live bullet.

The incident occurred on Monday morning as police drew weapons at multiple locations across Hong Kong as protesters barricaded roads and disrupted train services ahead of a general strike. 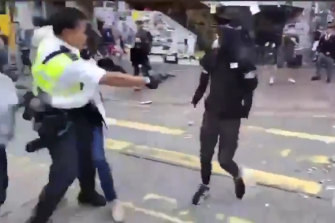 The video captures the moment a Hong Kong policeman holds onto one protester and shoots a second protester, who was later hospitalised.Credit:Facebook

The traffic officer continues to struggle with the white-clad protester he had grabbed, while pointing the pistol at a black clad protester who walks towards them.

The pistol is fired at the approaching protester’s stomach. He falls to the ground. Two more live shots are fired and a second protester is apparently hit and falls.

Radio Television Hong Kong reported that an ambulance arrived on the scene six minutes later to take the protester shot in the stomach, who lay on the ground barely moving in a pool of blood, to hospital.

Other local reports said the protester – believed to be 21 – was conscious when he arrived at PYN Eastern Hospital where he underwent surgery. 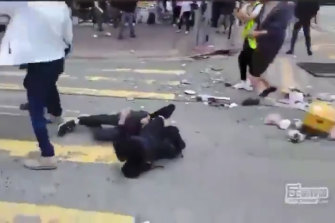 The protester crumples to the ground after being shot. Credit:Facebook

An angry crowd gathered at the site of the incident opposite the Tai Oh building in Sai Wan Ho and was sprayed with pepper spray by police.

RTHK reported that the video operator began crying when he realised what had happened.

The death of Alex Chow on Friday, after head injuries sustained from falling from a multi-storey car park after police had fired tear gas nearby, was the first death alleged to be directly related to the Hong Kong protests that have continued for five months.

In two earlier live-fire incidents, riot police had fired shots after they came under attack from groups of teenagers. In one incident, on October 1, a student protester had been armed with a stick. 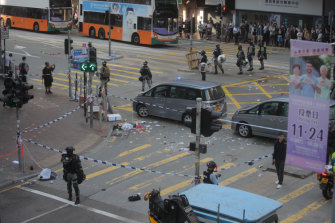 Police cordon off the scene of the shooting.Credit:AP

But on Monday the small number of protesters building barricades on the road using milk crates and boxes appeared unarmed.

The South China Morning Post interviewed a witness, a student, who said there was no warning given and questioned why the police officer had not fired up into the sky as a warning or used pepper spray.

The incident is likely to strengthen calls for Hong Kong Chief Executive Carrie Lam to appoint an independent commission of inquiry to examine police actions against protesters since June.

An independent investigation into allegations of police brutality is a core demand from protesters. 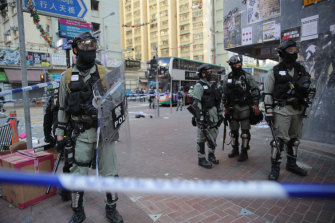 A police cordon at the scene of the morning’s shooting.Credit:AP

Lam has repeatedly rebuffed the demand, and instead appointed an international panel of experts in September to provide advice to Hong Kong’s police watchdog as it examines complaints about the protests.

But that panel, which includes Australian Michael Adams, chief commissioner of the NSW Law Enforcement Conduct Commission, has now concluded an independent inquiry is “essential”.

The panel said in a statement that the existing Hong Kong police complaints process lacked “the powers, capacity and independent investigative capability necessary to match the scale of events and the standards required of an international police watchdog operating in a society that values freedoms and rights”.

The expert panel said the Hong Kong police watchdog faced problems assembling a coherent account of the facts from police, accessing important documents and validating the accounts of police.

If the Hong Kong government boosts the powers and resources of the watchdog, it may be capable of providing an interim report on the causes and handling of the protests. “We believe it may provide a compelling case on why a deeper more comprehensive independent inquiry in a number of respects is essential,” said the experts’ statement.

More than 1000 complaints about police operations during the protests have been received, including 95 allegations of assault and over 460 reports of misconduct.

Police confirmed on Friday that a complaint of rape had been received.

Hong Kong police issued a statement warning protesters had built barricades in multiple locations across Hong Kong but failed to mention the live round shootings. Multiple universities soon cancelled classes and said staff should not travel to work and students should try to stay safe.