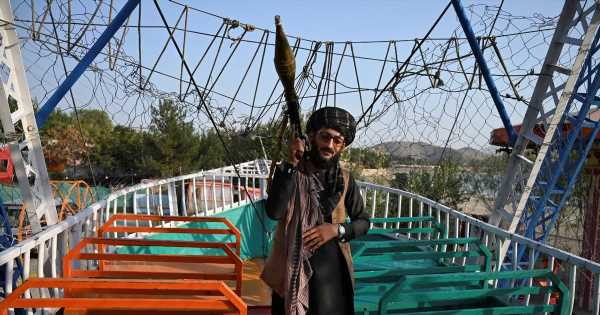 Murderous Taliban fighters have provoked a bizarre reaction after the thugs were pictured posing on a fairground pirate ship holding huge machine guns.

Members of the militia appeared to enjoy a day at a now-derelict amusement park near Kabul just weeks after taking the country back after an armed struggle.

Dozens of young men had their pics taken on fairground boats and rides wielding M4A1 assault rifles, AK-47s and more.

Another pointed his rocket-propelled grenade launcher toward the sky from the back of the pirate ship.

The striking images were captured at the Qargha Lake amusement park just outside Kabul yesterday. Taliban fighters took Afghanistan back from the US-backed government earlier this month after Nato forces pulled out of the country.

Families would normally have played at the popular theme park near the capital.

But a symptom of the latest Taliban rule is the return to the silence and oppression suffered by the country during the 1990s.

Women and girls have already been sent home from schools and universities. Many British soldiers who fought in the region expressed disappointment that their fighting had been 'in vain'.

There's no sign the Taliban will shy away from their old forceful tactics. Women's sport has been cracked down on, with Australia set to cancel its test against the men's cricket team in protest.

The Afghanistan women's team has been forced to stop playing altogether.

Members of the women's football team may come to the UK as refugees after Leeds United threw its support behind a scheme to take the nation's sports stars in. To stay up to date with all the latest news, make sure you sign up for one of our newsletters here.

Afghan women's football stars are still waiting for news while they take shelter in Pakistan.

That won't be of concern to these Taliban fighters, though.

Their days of childish fun have just returned.

Japan aims to have coronavirus vaccines in use by June 2021