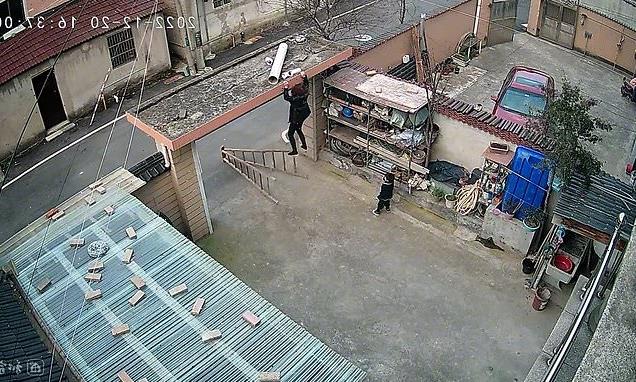 This is the amazing moment that a hero toddler saved his grandmother from a nasty fall after the ladder she was climbing on suddenly slipped away.

The young child had been playing badminton with his grandparent when the shuttlecock ended up on the roof.

In an attempt to retrieve the shuttlecock the woman grabs a stepladder.

As she climbs up the ladder she continues to speak to the lively and chatty young boy, who is stood swinging his badminton racket and jumping in the courtyard. 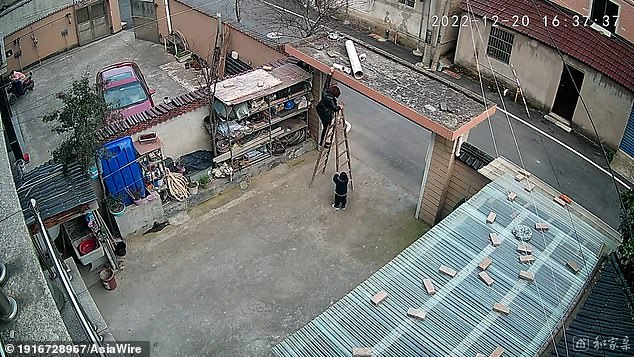 But as she reaches the top the wooden ladder falls from beneath her foot and crashes to the ground, leaving the woman clinging onto the roof with her just her fingertips.

As a dog starts barking, the woman yells at her grandson who runs over to the fallen ladder and attempts to push it up from the ground.

CCTV footage, from December 20, then shows her young grandson, believed to be around the age of five, struggling to pick it up.

The woman continues to instruct her grandson as he tries and tries to push up the ladder, that appears to be around three times taller than him. 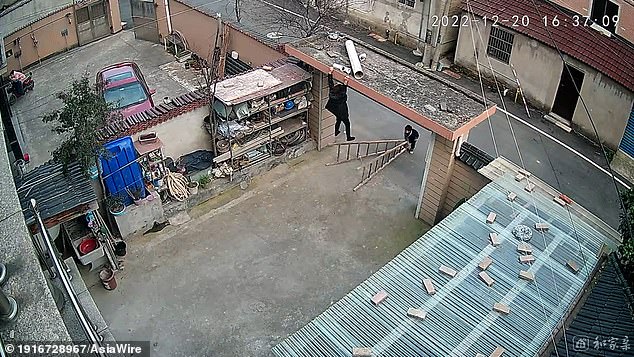 The boy, believed to be around five-years-old, is then seen grabbing the top of the ladder but struggling to pick it up 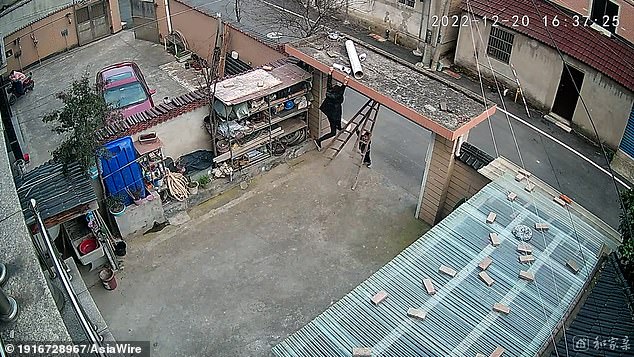 He eventually grabs it and walks it towards his grandmother, pushing up the heavy ladder until she is able to safely wrap her leg around it

Just as he is yelling ‘I can’t lift it up’, however, he finally gets a grip raising it into the air.

Grabbing hold of the object he walks underneath it, slowly pushing it further into the air until it is close enough to his grandmother that she can hook her leg around it and pull it in closer.

After a terrifying few moments hanging in the air, the woman is seen laughing with relief before climbing back towards the ground.

The woman goes on to examine her hands before thanking her young grandson for preventing any further injury.

The video gained a lot of comments on Douyin, the Chinese version of TikTok with ‘distance’ saying: ‘The child shouted that he couldn’t lift it up, but he never gave up his hand. The spirit and perseverance are praiseworthy.’

Secret Amazon project is working to develop vaccine for cold 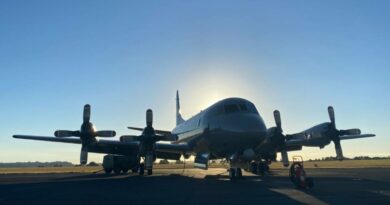