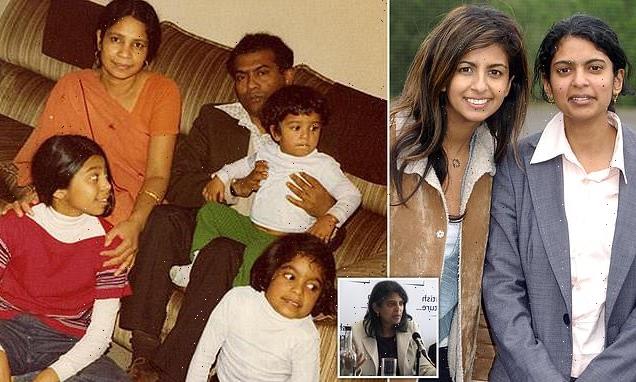 The Blue Peter pin-up and ‘Radical Rup’: How ex-children’s TV star Konnie Huq helped her Labour politician sister Rupa on the campaign trail and based a children’s book character on her – as suspended MP faces backlash for Kwasi Kwarteng slur

Suspended Labour MP Rupa Huq – who is today facing a backlash for her ‘racist’ jibe about Kwasi Kwarteng – is a privately educated amateur DJ with a doctorate on European youth culture whose younger sister, former Blue Peter presenter Konnie, has appeared alongside her on the campaign trail.

The 50-year-old has represented her Ealing Central and Acton since 2015 after giving up her job as a university lecturer teaching a range of subjects including sociology, criminology and media studies.

Konnie has described how she was ‘always into politics’ and acquired the nickname ‘Radical Rup’ for wearing red socks at school rather than navy blue ones like the other children. The former TV star has featured an ‘exaggerated’ version of her sister in one of her children’s books. The pair have an older sister, Nutun, a successful architect.

Dr Huq, who is married with one son, is currently at the centre of a major scandal after being branded ‘racist’ by her own party leader, Sir Keir Starmer, for comments she made about the Chancellor during a conference tirade about his tax-cutting budget.

During a Q&A session, she said: ‘He’s superficially, he’s, a black man but again he’s got more in common… he went to Eton, he went to a very expensive prep school, all the way through top schools in the country. If you hear him on the Today programme you wouldn’t know he’s black.’ 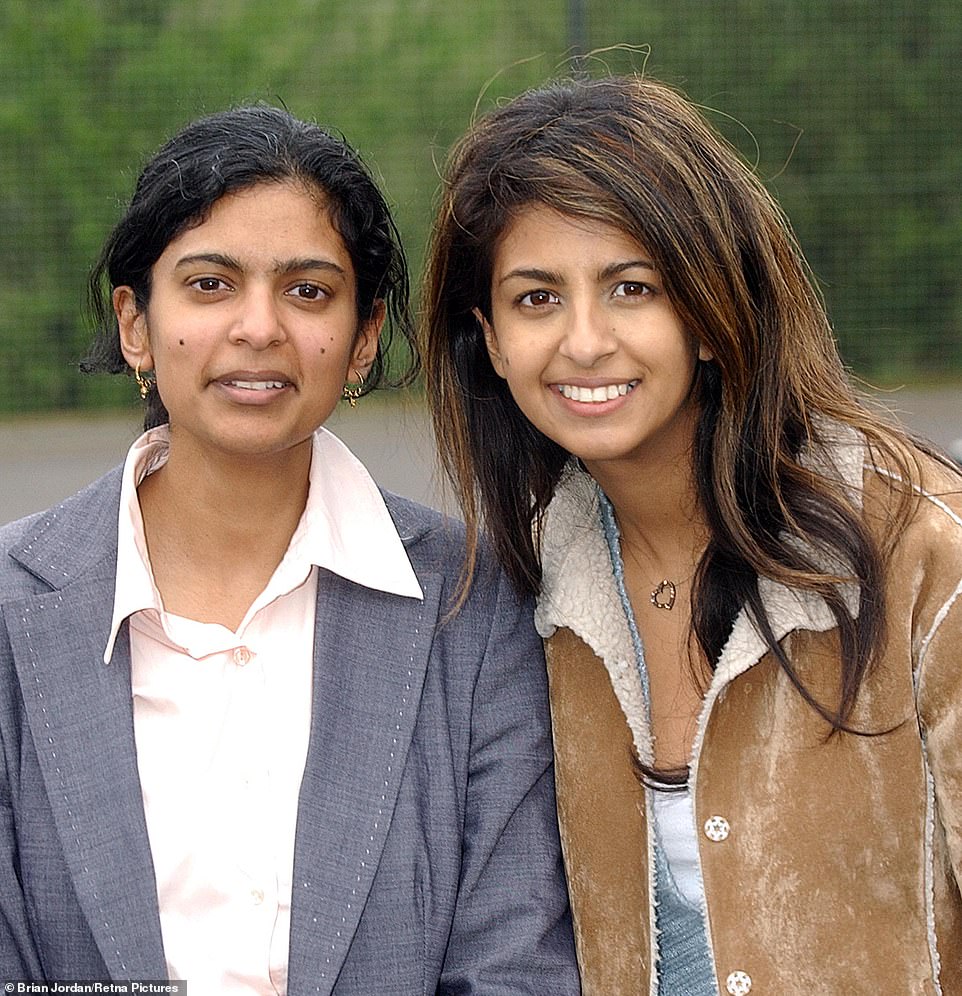 Rupa Huq is sister to Konnie Huq, the former Blue Peter presenter. The pair have previously joined each other on the campaign trail 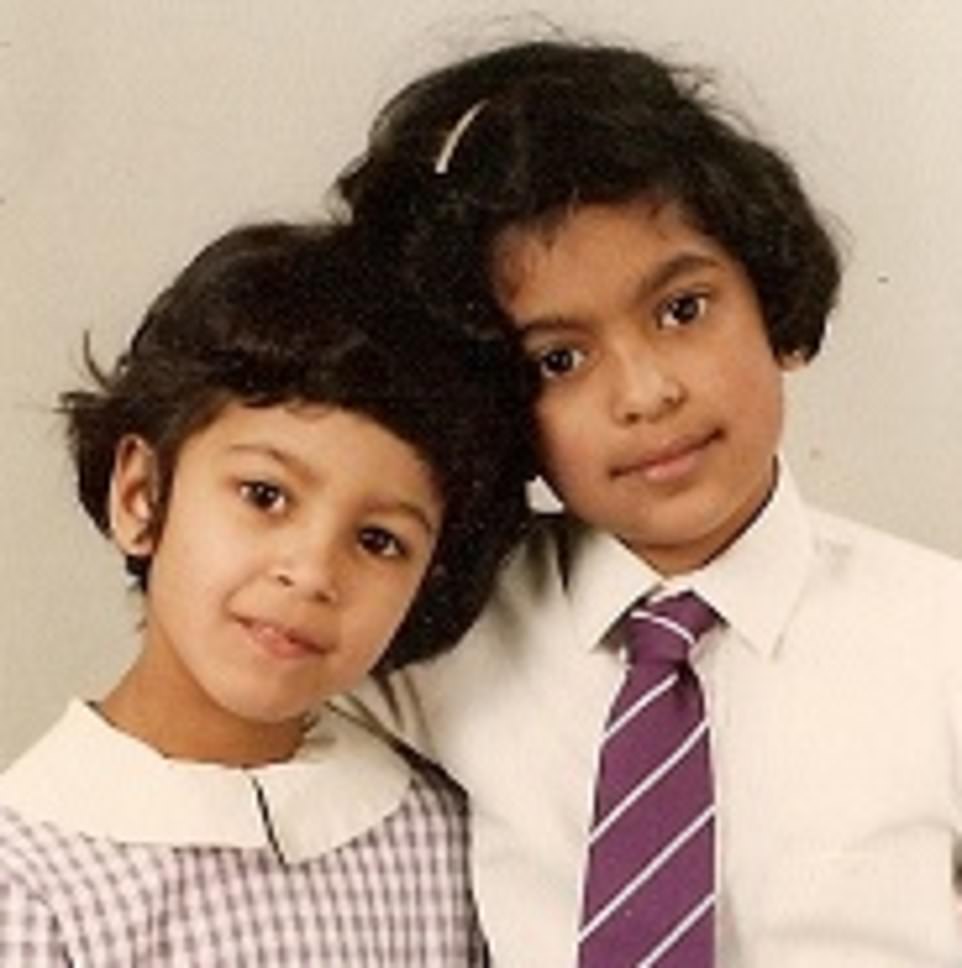 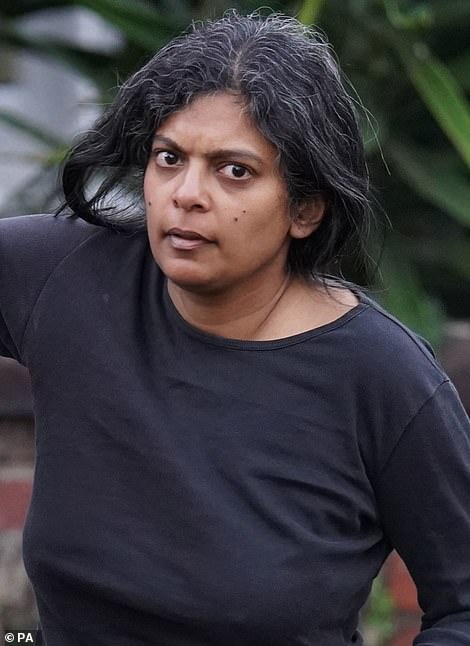 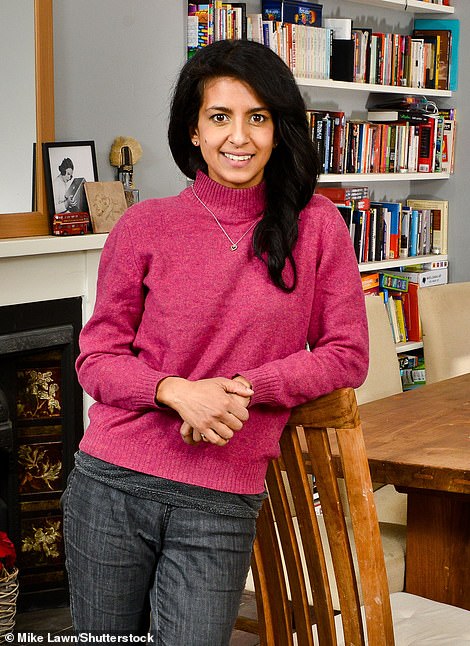 The Ealing Central and Acton MP (left) has been suspended by Labour following her ‘racist’ comments about Mr Kwarteng. Konnie is seen on the right

The MP was born in Hammersmith and grew up in Ealing, with her father – who had moved to the UK from Bangladesh with his wife – running an Asian restaurant.

After graduating from Cambridge University she worked for Labour at the European Parliament – a time during which she later revealed she had been sexually harassed by a male MEP – before becoming a lecturer at the University of Manchester.

After two unsuccessful attempts at entering Parliament, Ms Huq was elected as MP for Ealing Central and Acton at the 2015 general election. She was among those MPs to nominate Jeremy Corbyn in that year’s Labour leadership contest, although she later supported Yvette Cooper.

Writing about Rupa in the Times, Konnie said: ‘Rupa’s always been into politics. She did it at school and she’s been very politically inclined from the get-go, really. I remember her staying up all night watching the results of the 1992 general election.

‘We went to a school where the colours were very patriotic: red, white, and navy blue. Everyone would wear navy-blue socks but she always wore red socks. We used to call her ‘Radical Rup’ in her red socks.’

Konnie, 47 – who is married to Black Mirror creator Charlie Brooker – described her sister as a ‘really good MP’ and revealed she had used her as the inspiration for Cookie, a character in one of her children’s books.

‘[She’s] the youngest of three sisters and her middle sister’s really into politics,’ Konnie wrote. ‘She’s an exaggerated version of us all. Rupa is really funny, and we both see the absurd in everyday life, but it would be a really boring book for kids if it was exactly true to life.’

Dr Huq had an awkward relationship with the former Labour leader, Jeremy Corbyn – with the MP raising eyebrows in 2016 by saying she was optimistic about the party’s prospect because he was too old to continue as leader for much longer.

She told a meeting of the Blairite Progress group in West London: ‘On national trends, I’m gone very, very easily. This is just a five-year adventure.’

A week before, she faced further controversy for seeking to defend her Labour colleague, Naz Shah, for allegedly anti-Semitic posts she shared online. The Labour MP for Bradford West was suspended by her party over the posts, including one that suggested Israelis should be relocated to the United States. 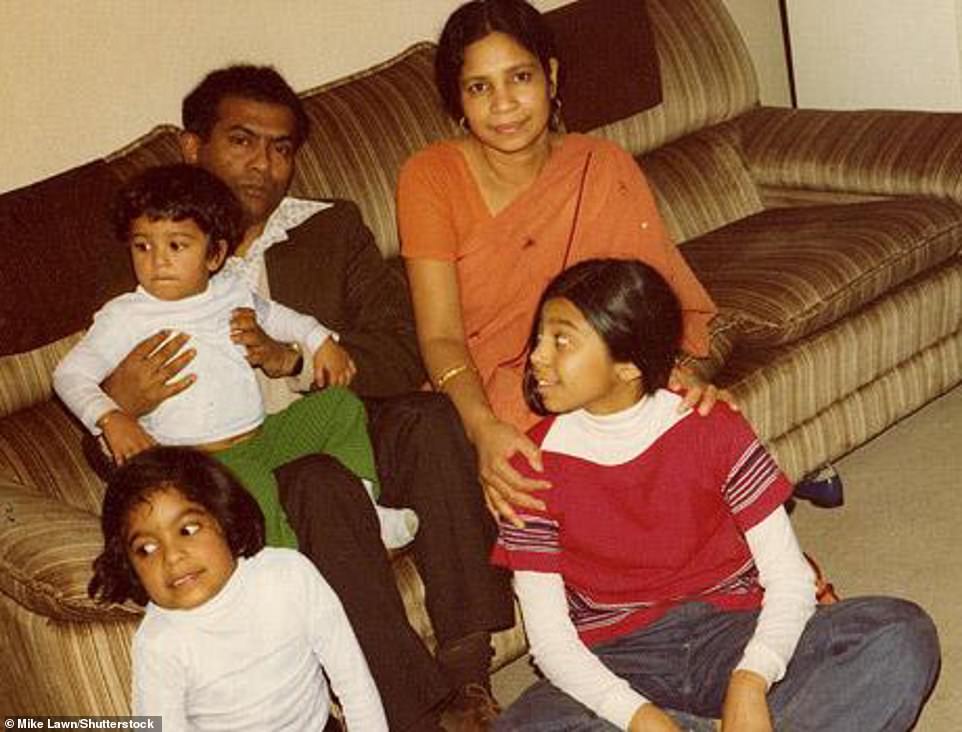 The Huq sisters were born in Hammersmith and grew up in Ealing, with their father – who had moved to the UK from Bangladesh with his wife – running an Asian restaurant. Pictured is an old family photo 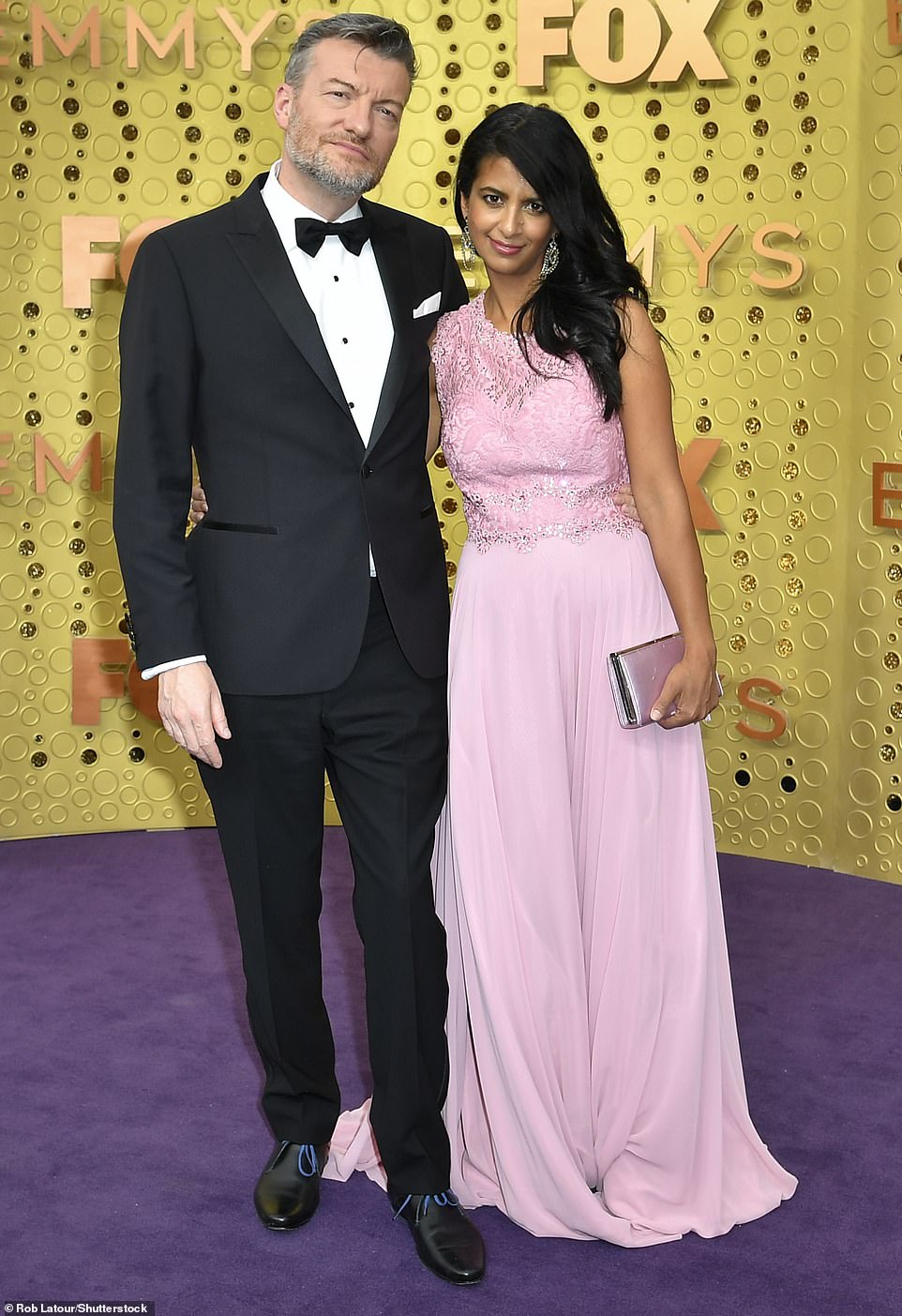 Konnie, 47 – who is married to Black Mirror creator Charlie Brooker – described her sister as a ‘really good MP’ and revealed she had used her as the inspiration for Cookie, a character in one of her children’s books

Dr Huq tried to defend Ms Shah on the grounds that she had just ‘shared a post on Facebook’ – and compared it to the fact that she herself had once shared a picture of Boris Johnson on a zipwire.

She was immediately accused of trivialising the issue.

She is a committed Remainer and has previously spoken out about prejudice faced by ethnic minority MPs.

In 2018, she received a suspicious package containing an anti-Islamic letter and a sticky liquid – later found to be low-level toxic. Similar packages were received by three other Labour MPs from Muslim backgrounds.

Her future in the Labour Party is now in doubt, with Sir Keir announcing she was under investigation and refusing to be drawn on whether she would be able to return to the Labour benches.

Keir Starmer branded one of his own MPs a racist today after she branded Chancellor Kwasi Kwarteng ‘superficially black’.

The Labour leader distanced himself from Rupa Huq after the Ealing Central and Acton MP, 50, launched a conference tirade at Mr Kwarteng over his tax-cutting Budget.

She was recorded telling an event at Labour Party Conference on Monday that ‘superficially he is a black man,’ adding that people listening to Mr Kwarteng during radio interviews ‘wouldn’t know he is black’.

She was suspended by the party and had the Labour whip removed, despite eventually apologising to Mr Kwarteng.

On a round of broadcast interviews today Sir Keir told LBC Radio: ‘What she said in my view was racist, it was wrong and she’s been suspended from the whip in the party and that was done very, very quickly.

‘I think that tells you how strongly I feel about those comments.

‘She shouldn’t have said it. She will be dealt with and I’ll be absolutely clear it was racist.’

Sir Keir said it was not his personal decision to suspend her but ‘it’s a decision I absolutely agree with’ and the MP would now face an investigation. He would not be drawn on whether she would be able to return to the Labour benches. 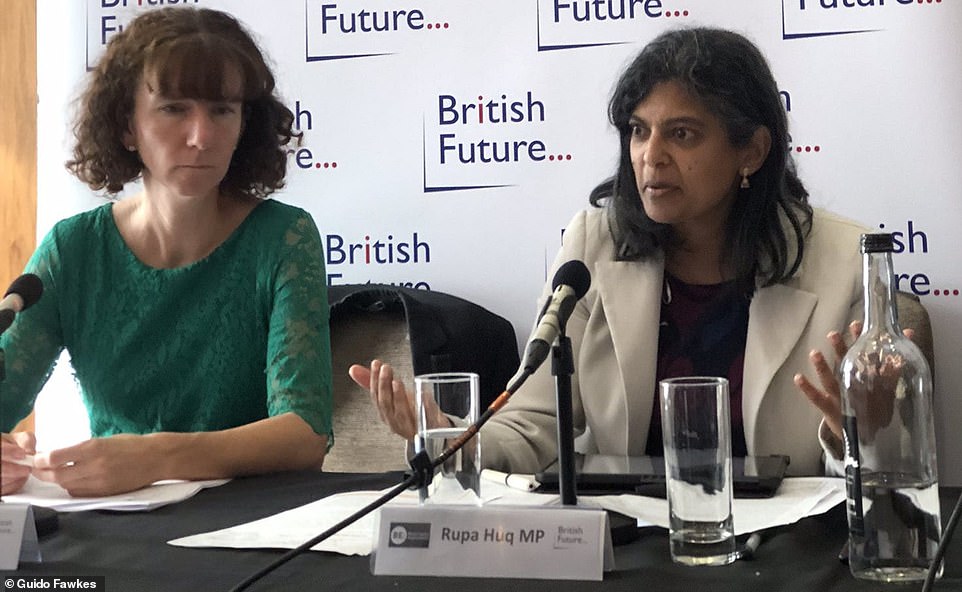 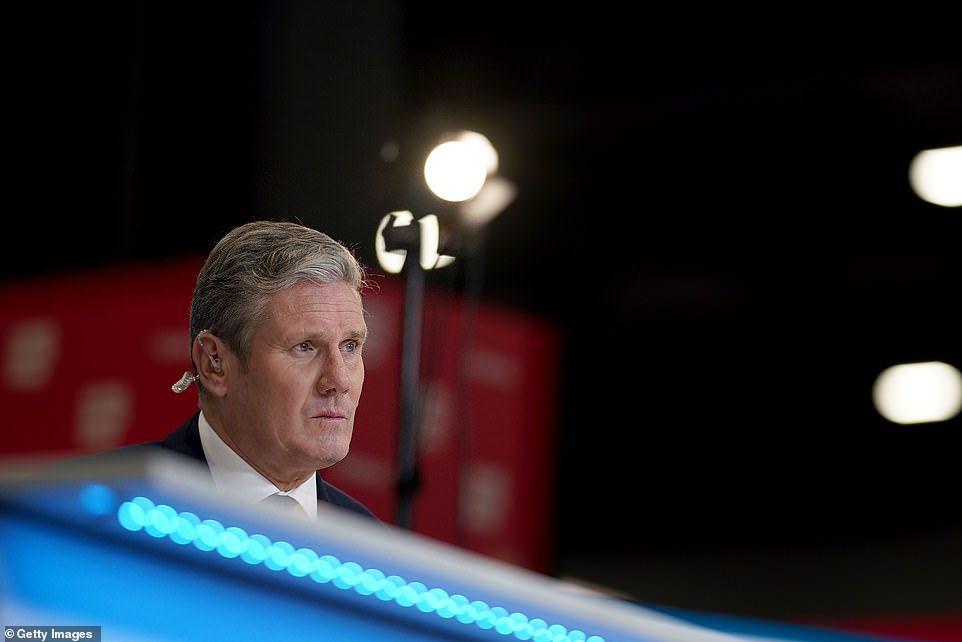 On a round of broadcast interviews today Sir Keir told LBC Radio: ‘What she said in my view was racist’.

The fury over Ms Huq’s comments threatened to overshadow Sir Keir’s keynote speech to Labour members in Liverpool, which he delivered this afternoon less than an hour after the row broke out.

Ms Huq later posted on Twitter to reveal she had contacted Mr Kwarteng to offer her ‘sincere and heartfelt apologies’ for her ‘ill-judged’ comments.

‘I wholeheartedly apologise to anyone affected,’ she added.

In the audio recording of her remarks, Ms Huq – the elder sister of former Blue Peter presenter Konnie Huq – is heard commenting on the Chancellor’s school education.

‘He went to Eton, I think, he went to a very expensive prep school – all the way through the top schools in the country,’ she said.

‘If you hear him on the Today programme, you wouldn’t know he is black.’

He posted on Twitter: ‘Keir Starmer must act over Rupa Huq’s digusting comments at #LPC22 about the Chancellor.

”Superficially he is a black man’ because he’s Conservative is a vile thing to say.’

In a letter to the Labour leader, Mr Berry wrote: ‘I trust you will join me in unequivocally condemning these comments as nothing less than racist and that the Labour whip will be withdrawn from Rupa Huq as a consequence.’ 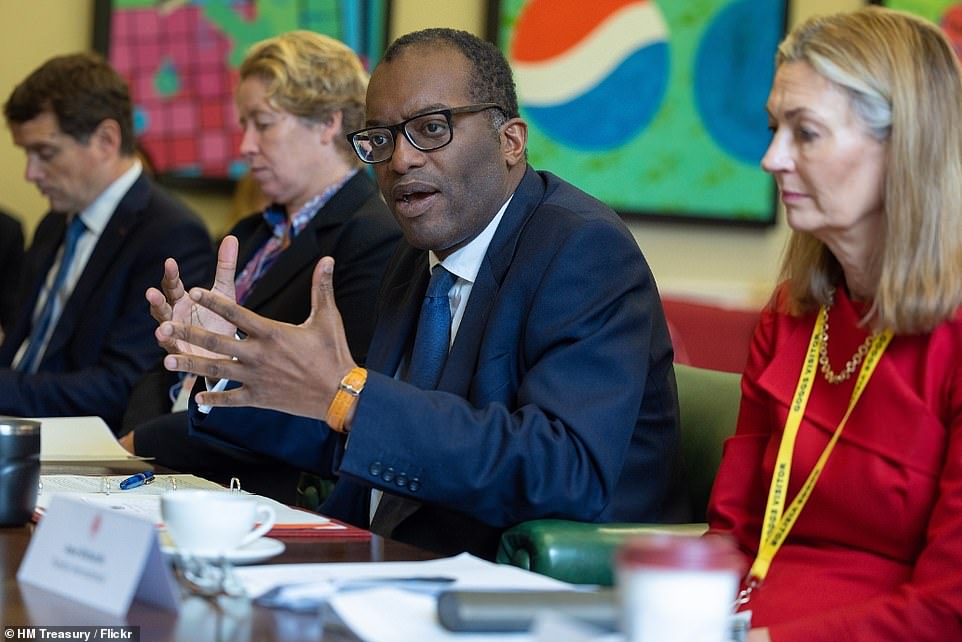 In an audio recording, Ms Huq was also heard claiming those listening to the Chancellor during radio interviews ‘wouldn’t know he is black’

Former Cabinet minister Sajid Javid also joined the condemnation of Ms Huq and said he was ‘appalled and saddened to hear these comments by a fellow MP’.

‘Rather than give encouragement to racists and people who seek to divide us, she should know better,’ he added. ‘Not too late for her to show that she does.’ 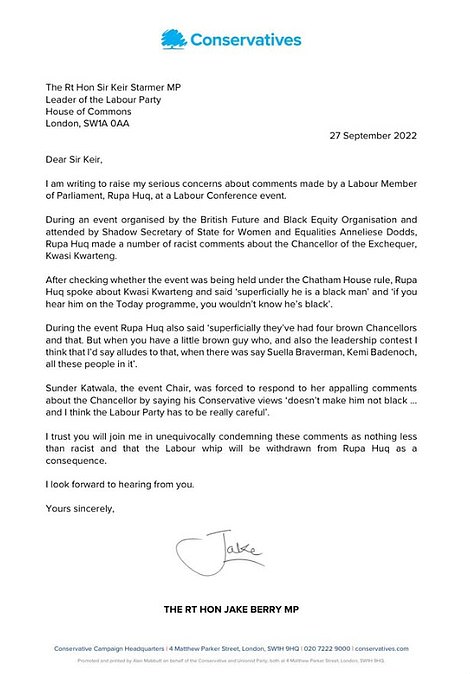 In a letter to Sir Keir Starmer, Tory chairman Jake Berry branded Ms Huq’s comments ‘racist’ and demanded she have the Labour whip withdrawn from her

Andrew RT Davies, the Conservative leader in the Welsh Senedd, expressed his outrage as he described Ms Huq’s remarks as ‘abhorrent racism’ and called on Sir Keir to take ‘urgent action’.

Gregory Stafford, the Tory leader on Ealing Coucil, posted on Twitter: ‘Absolutely unacceptable comments by Rupa Huq vocalising the view of some on the Left that skin colour should determine your political views and if you don’t subscribe to their ideology then you are only ‘superficially’ black.’

Ms Huq made the remarks during an event on Monday also attended by Anneliese Dodds, Labour’s chair and shadow secretary of state for women and equalities.

She sat alongside Ms Dodds at the event titled ‘What Next for Labour’s Agenda on Race?’, which was hosted by the British Future think tank and the Black Equity Organisation.

Sunder Katwala, the director of British Future who chaired the fringe event, challenged Ms Huq over her remarks.

He warned the MP that Mr Kwarteng’s political ideology ‘doesn’t make him not black… and I think the Labour Party has to be really careful’.

It is understood the audience at the fringe event applauded loudly after Mr Katwala challenged Ms Huq.

Mr Katwala revealed that Ms Dodds was no longer at the fringe event when Mr Huq made her remarks about Mr Kwarteng, with the Labour chair having left after half an hour.

Prior to her suspension, Labour’s shadow foreign secretary David Lammy called on Ms Huq to apologise for her ‘unfortunate’ comments about Mr Kwarteng.

‘I think those comments are unfortunate,’ he told the BBC. ‘I wouldn’t have made them myself and, clearly, I hope Rupa apologises and retracts them.’ 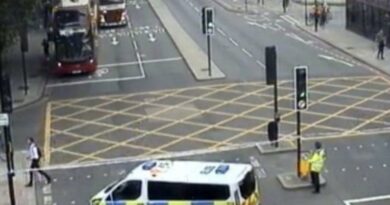 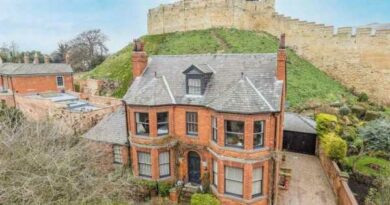 Medieval home put on the market with walls of 1,000-year-old castle on doorstep