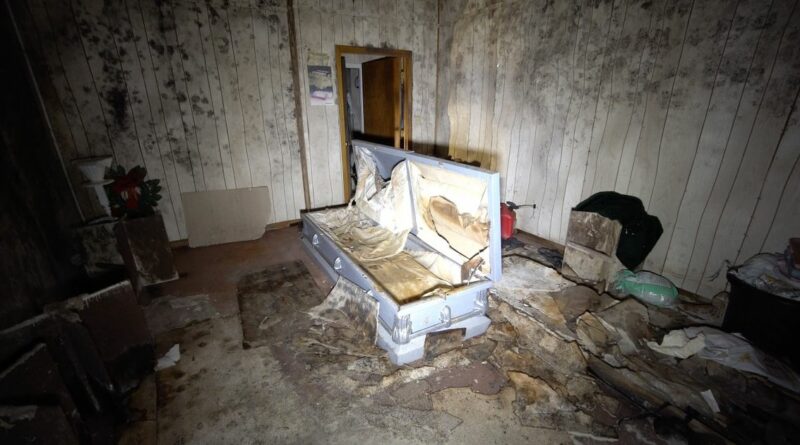 Urban explorer Robb, 40, from New York, made the grim discovery in Florida.

The full-time content creator found that the crumbling building had been unused for almost a decade, after cops arrested the owner for obtaining the property under false expenses.

It was revealed that despite money being accepted for funeral costs, three bodies were not taken to the crematorium and were left to decompose in the venue. The bodies were taken away in 2012 but evidence of their stay remains.

A local resident gave Robb a tour as he filmed his visit for his intrigued viewers, reports The Sun.

Throughout the footage, a variety of odd items are seen – including an open coffin where a dead body was once found, a gravestone belonging to someone called Daisy B Hunt, who passed away in 2004, and a child’s animal toy.

"This old funeral home definitely had a creepy vibe while inside of it, having a history of neglect and criminal behaviour probably helped out with that," Robb said.

"The remains and photos of the dead really brought the creepy meter up on this particular exploration.

"It was a strange place but most abandoned buildings are a bit strange in my opinion."

The blood-curdling discovery also included a huge hole in the floor that led to a basement below.

Inside, old polaroid photos from funerals held in the building are scattered along with letters and documents.

Another chilling find was a bag of ashes from 1995, another one from 1999, alongside the certificates and personal details of the deceased.

Certificates and clocks can be seen still pinned to the walls in other rooms.

But the most eerie find was yet to come and Robb was horrified to stumble across a casket which had previously held a dilapidated body wrapped in clothes.

A different room had a table on which one of the other bodies was reportedly found, along with polaroid photos of the carcass pre-death.

It hasn't been revealed where the third body was found.

It is thought that fearless squatters braved the deathly squalor at some point in the building’s history, because a random mattress and duvet was found amongst the dust in one of the back rooms.

Robb added: "People's loved ones were left behind because the owner was neglectful and criminal in her responsibilities.

"I couldn't imagine someone I loved remains or my own be treated poorly after my death and the actual thought of it bring a strange creepiness to me.

"I hope they all get closure one way or another and their souls are in a better place than their vessels were left.”

The explorer regularly shares his abandoned building exploits on his YouTube channel, RNK All Day.

Stay up to date with all the Daily Star's craziest stories by signing up to one of our free newsletters here.

"I have found a lot of strange things in these kinds of places, it's hard to choose a particular one, but in this one, it was the photos of the deceased and the ashes,” he continued.

"In others, it could be a machine, hospital equipment, furniture, or even a creepy old children's toy, that why I love these places because they all have something different, rare, and strange."

The original owner of the funeral home was not named.

Typhoon Lekima, with winds of 209 km/h, bears down on coastal China