INXS guitarist Tim Farriss is “unsurprisingly depressed” after his left ring finger was severed in a boating accident, leaving him unable to play his instrument, compose music or work on his farm, his lawyer has told the NSW Supreme Court.

Farriss and his company Montana Productions are suing the owners of the Omega Clipper and a boat charter company for damages, after his finger became caught in a chain while he attempted to drop anchor in Akuna Bay in Sydney’s north on January 24, 2015. 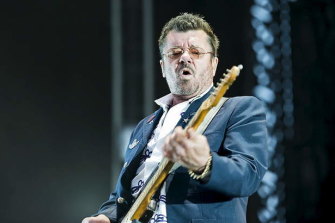 Farriss’ barrister Adrian Williams told a Supreme Court hearing on Monday that Farriss’ ring finger was surgically reattached after the accident, “but it is useless”.

“It is in a state now, where he cannot play guitar,” Mr Williams said, adding that since the accident Farriss, 64, cannot compose music in the way he once did; nor could he work on his Kangaroo Valley farm, which has since been sold.

“He is unsurprisingly depressed”.

Mr Williams said on the morning of the accident, Farriss was having trouble dropping the anchor and after contacting the charter manager for assistance, received instructions via text message. His problems continued, with the anchor chain kinking and the winch failing.

He said as Farriss attempted to un-kink the chain with his left hand, the hand was “dragged into the winch”, causing the injury to his finger.

But John Turnbull SC, appearing for the defendants, said his clients will argue that “ultimately there was a risk of harm, but not to a person acting reasonably”.

Mr Turnbull said there were alternative options available and “a reasonable person would not have been injured if they had exercised reasonable care”.

Regarding economic damages, Mr Turnbull said there was also a question over whether INXS would ever tour again. Farriss had claimed there were prospects of a 2017 tour to coincide with the 30-year anniversary of the album Kick and the 20th anniversary of the death of frontman Michael Hutchence.

Giving evidence on Monday, Farriss said comments by his brother Jon during a 2012 concert that it “could very well be the last INXS concert” were a surprise to him, and he had envisaged touring “for the rest of my life”.