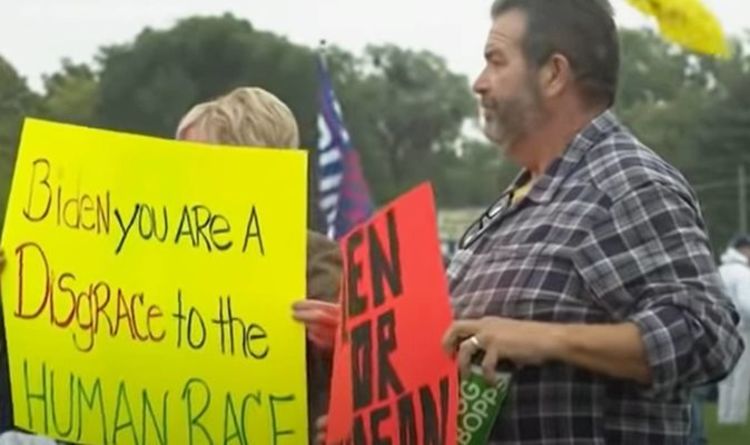 Joe Biden was forced to face a hostile crowd as he visited Michigan on Tuesday as thousands of angry voters protested against his proposed $1.5trillion infrastructure bill and the vaccine mandate. Protesters held up signs condemning the US president as his motorcade drove through Livingston County, a strong Conservative area that backed Donald Trump in the recent election. Mr Biden delivered a speech promoting his infrastructure bill but audiences were also less than enthusiastic at his delivery as he reiterated his plan to “build back better” post-pandemic.

Fox News spoke with some protesters on the ground who were furious at the expensive infrastructure plan.

One told the broadcaster: “The money has to come from somewhere, you can’t keep printing it.”

Meghan Reckling, chair of the Livingston County Republicans in Michigan, also slammed Mr Biden for living in a bubble and being out of touch with the ordinary American.

She said: “I think this is reflective of how upset people in everyday America are, when you leave the Washington bubble, about the spending going on in Washington, D.C.”

Mr Biden spoke at a training facility for the International Union of Operating Engineers but saw a lukewarm response to his speech.

The US President also made several gaffes during his presentation, including saying he wanted to tell “everyone in this room” despite being outside.

Mr Biden also stuttered through a memory he had of his grandfather and told audiences he installed petrol pumps across the country despite opposition from the locals who did not want large stockpiles of petrol being put underground.

The head of state tried to make the comparison with electric charging ports for cars and the opposition to adopt them.

During the speech, Mr Biden said the country was at a turning point and large investment was needed to keep up with competitors like China.

He noted China makes significant investments in education and the US should match that.

He told audiences: “We risk losing our edge as a nation. Our infrastructure used to be the best in the world, literally not figuratively.

DON’T MISS:
Sturgeon under pressure as police forced to be paramedics amid crisis [INSIGHT]
Boris battles to BAN Brits from voting in elections without ID [REVEAL]
Boris cuts Sturgeon down to size with brutal ‘gingerbread’ joke [LATEST]

“Today, according to the world economic forum, we rank 13th. … All those investments that fueled a strong economy, we’ve taken our foot off the gas.

“The world has taken notice, by the way, including our adversaries and now they’re closing the gap in a big way.”

Video of the speech saw audiences give half-hearted cheers as Mr Biden paused for applause. 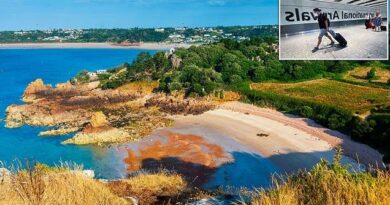