Madison Bumgarner tossed a no-hitter on Sunday afternoon in Atlanta.

Unfortunately for the Arizona Diamondbacks veteran pitcher, however, the feat won’t be officially considered a no-hitter.

Bumgarner didn’t give up a single hit in the Diamondbacks’ 7-0 win over the Braves on Sunday in the second game of a doubleheader at Truist Park — both of which lasted just seven innings, per new Major League Baseball rules implemented last season.

Bumgarner is, though, the first pitcher to throw seven no-hit innings in the new doubleheader format.

The Diamondbacks won both matchups on Sunday and held the Braves scoreless over the 14 combined innings and gave up just one hit. They won the first game 5-0, following a 5-4 loss to Atlanta on Friday. Their game on Saturday was postponed due to inclement weather.

Arizona has now won six of its last seven and is back to .500.

While MLB may not be recognizing Bumgarner’s no-hitter, the Diamondbacks are certainly treating it as such.

IT COUNTS IN OUR BOOK.

When did Evelyn Mae Boswell go missing? – The Sun 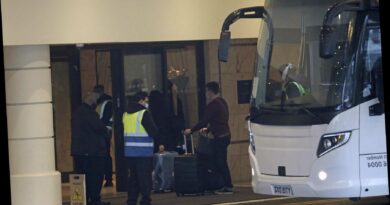