Eighteen people who attended the Melbourne “freedom” protests in November have tested positive for coronavirus, with one unvaccinated protester admitted to hospital.

Investigations into the 10 men and eight women who contracted the virus are ongoing, but public health officials believe nine cases were infectious when they attended the protests and seven others likely acquired their infections at the protests. Only one of the 18 was fully vaccinated, while two had received one dose. 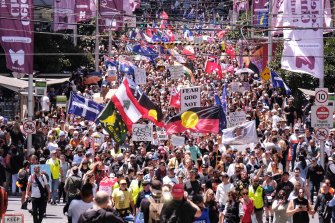 Thousands of people have turned up to large rallies held every Saturday this month, and a smaller group of protesters has also camped on the steps of Parliament House for more than a week.

All of the people who have tested positive are aged between 19 and 44. Eight attended the protest held in Melbourne on November 20. Victoria Police Chief Commissioner Shane Patton told 3AW’s Neil Mitchell that the force estimated the crowd numbered between 10,000 and 20,000, swelling to “20,000 at one stage”.

One person who attended the November 20 protest is now being treated in hospital, however they are not in intensive care. They were not vaccinated.

A Health Department spokesman said it was aware of the positive cases and urged anyone who had attended the November protests “to get tested if they develop even the mildest of COVID-19 symptoms, and get vaccinated”. 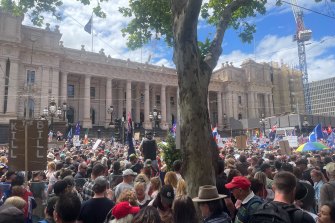 Crowds outside Parliament House at the Melbourne protest on November 20.Credit:Melissa Cunningham

Deakin University chair of epidemiology Catherine Bennett said there could be more cases linked to the protests that have not yet been identified by health authorities.

“Protests are not illegal events, but people might still be reluctant, even if they do get tested, because they’ve got symptoms, to say they were at the protest,” she said. “It might be that there’s also going to be a group of people less likely to test, particularly if they have only mild symptoms.

“I think in fairness to people too, a lot of people might still just have an asymptomatic infection. And that’s the worry if they’re potentially exposing other vulnerable members of their own family.”

She said there was an increased risk of acquiring an infection at “freedom” protests given they bring large groups of people together who are more likely to be unvaccinated. The hospitalisation of one of the unvaccinated attendees highlighted the risk.

“Outdoors is safer, but it’s not as safe as we like to think if you’re all crowded, if it’s not a particularly breezy day, and you’re not wearing masks.”

“It just shows that when you have a large number of cases, people that don’t fit the profile that most people have in their head – which is someone who’s very elderly or someone who’s got all these other you know comorbidities – that it actually can impact anybody,” she said.

While the protests have been held outside, the fact that most people don’t wear masks and are closely packed together increases the risk of infection, Professor Bennett said.

“If you can’t keep your distance from people … if you’re mixing very closely with other people, particularly when you’re crowding around listening to someone making a speech, if it’s not a very breezy day, if you’re not wearing masks, all those things we know with Delta can lend themself to outdoor transmission,” she said.

“And if people are calling out and cheering, you just add to that possibility … They only have to stay there for a minute.”

Police say 20,000 attended the most recent protest on Saturday, with the group marching through the CBD to condemn vaccine mandates, pandemic legislation and other health measures introduced by the Andrews government.

On Monday morning, people were camped outside Parliament House giving haircuts to people regardless of their vaccination status as part of a protest against the vaccinate mandate. Currently, Victorians must be fully vaccinated to attend a hairdresser or beauty service.

Victoria recorded 1007 new cases of COVID-19 on Monday and three deaths, as health authorities investigated a suspected case of the Omicron strain of coronavirus.