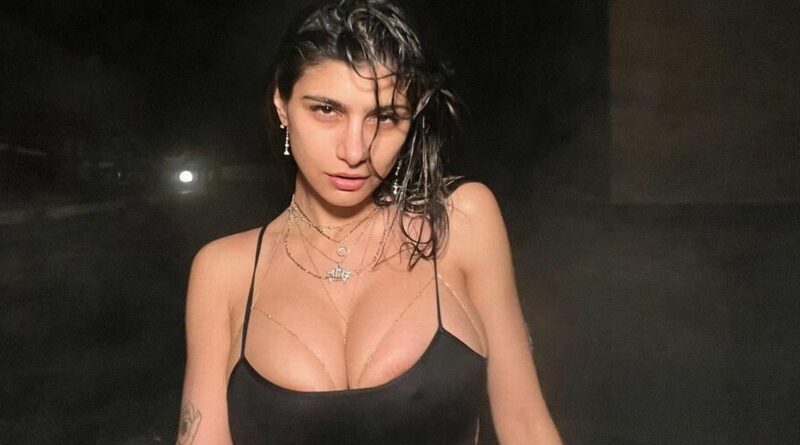 Ex-Pornhub star Mia Khalifa has wowed her fans with a series of snaps from a steamy new photoshoot that included a cake featuring her face.

The Lebanese-American OnlyFans model, 29, shared the snaps today with her 27.8million Instagram followers.

The nine photos were taken by photographer Michelle Watt, with Mia's alluring outfits picked out by stylist Indiana Roma Voss.

In two, her hair reaches down to the floor with Rapunzel-like extensions as she looks over her shoulder in a somewhat see-through white gown.

In others, Mia poses next to a fireplace and a glass statute, while donning a cropped black dress revealing an aquamarine thong.

The sets, designed by Shelley Burgon, seem to be a mixture of both retro and futuristic.

In another snap two Mia's appear, one gazing out of a kitchen window in a plaid two piece, and another knelt down peering in while wearing a multi-coloured, furry get-up.

Famous faces were quick to rush to the comments section to compliment the former adult actress.

Fans were also keen to shower Mia with praise after she shared the seductive snaps, with several leaving fire or heart-eyes emojis.

One declared that they were "waiting" for the star, while another – seemingly having missed Cortez's earlier post – asked if she needed a boyfriend.

"Its just perfect," wrote a third fan, while a fourth declared simply: "Prettiest."

This comes after Mia lifted the lid on exactly how much she rakes in on raunchy adult site OnlyFans.

In an interview published to her Instagram story, Mia was asked: "Larsa Pippen makes $10,000 a day on OnlyFans. How much do you make a day? No offence?"

Mia simply replied: "Around that."

Coronavirus could kill 45,000,000 and infect 60 per cent of global population