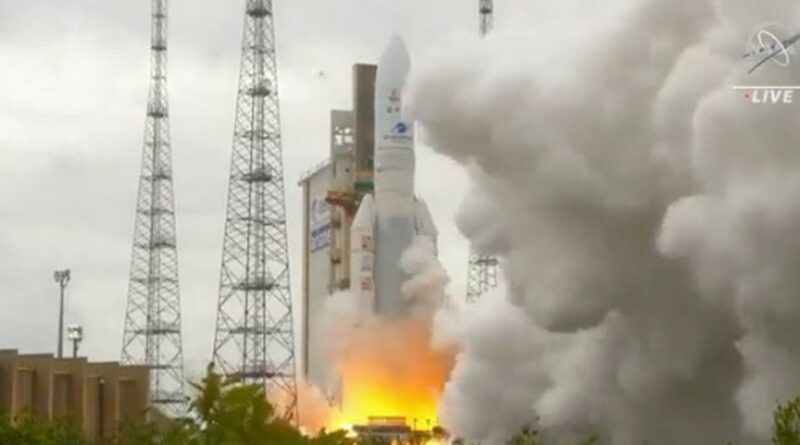 The world's most powerful telescope has launched on Christmas Day and scientists are hopeful for signs of alien life in the fringes of space.

In the clip, the engine of the Ariane 5 rocket roars into life and spews out fire as it launches at 12.20 pm.

As the rocket leaves Earth, NASA spokesman Rob Navias says: "Lift-off, from a tropical rainforest to the edge of time itself, James Webb begins a voyage back to the birth of the universe."

Physics researchers have identified many ways the telescope could find signs of alien life on planets outside our solar system, known as "exoplanets".

Simple life such as plants or bacteria could give off clues with gases they emit but some studies have even hinted at complex civilisations being discovered.

A study from astrophysicists at Harvard University titled "Detectability of Artificial Lights from Proxima b" says the JWST would be capable of detecting lights from alien cities on the planet – but only if they cover a minimum of 5% of the surface.

The telescope will look further back in time than ever before to 400 million years after the Big Bang, the UK Space Agency says.

It was originally meant to leave on Christmas Eve, but a forecast of high-level winds at the spaceport forced it to be postponed.

Controllers were given a 30-minute window to launch the rocket beginning at 12.20 pm and successfully hit the beginning of the time slot.

Preparation for the project began in 1996, and construction was completed in 2016.

The launch was initially planned for earlier this month, but several setbacks including a communications issue and an incident requiring an extra round of checks on the telescope pushed the date back.

Scientists from Durham University are among a team of 50 researchers from around the world taking part in the Cosmos-Webb programme that will use JWST to survey a patch of sky near the constellation Sextans.

The cosmologists will map the dark matter around galaxies with the aim of unlocking the secrets of the mysterious substance that makes up the majority of matter in the universe.

Where a mine supplied a nascent nation, cleanup nears end