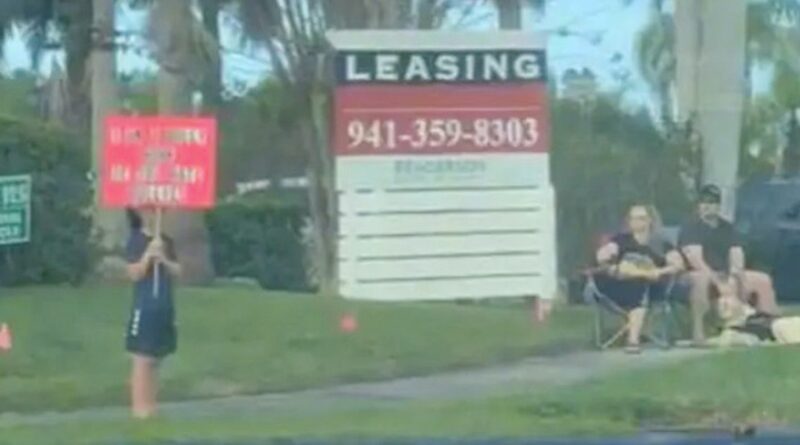 A dad has been slammed for making his son hold a roadside sign saying 'I am a bully'.

A viral TikTok video shows a young lad gripping hold of a humiliating notice declaring himself a bully.

The sign continues to encourage motorists to 'honk' if they 'hate bullies' but the boy's dad has come under fire online for being a hypocrite.

TikToker Gavin Klein shared the clip which is understood to have been filmed in Florida, US.

Close to the sign-wielding boy were a pair of adults thought to be his parents perched in deck chairs with a yellow labrador at their feet.

The scene was filmed from behind the dashboard of a car where the person filming can be heard screeching "so mean".

What the boy did to deserve such a punishment is obviously unknown but that has not stopped social media users sharing their opinion on the stunt, LadBible reports.

Gavin captioned the video – which has been seen 6 million times – "Dads a bully".

However his view was hardly shared by thousands of viewers who praised the parents for teaching their son a lesson.

One popular comment questioned Gavin's stance, saying: "Bad parents? Lol dude you are soft and that one great way to handle that!

Another person said: "If you disagree with this as a form of punishment, you're soft lmao. Kid needs to learn his lesson."

Someone was keen to put the humiliation into context, writing: "You think the kid that got bullied isn't embarrassed everyday at school. He got a taste og his own medicine"

A US decorator has successfully played a Christmas prank on his neighbours a little too well after they believed it was a real person dangling from his roof.

The prankster has been posting videos on TikTok about the display on his home, including how the mannequin was made.

Denmark’s $6.05 Starbucks latte is the most expensive in the world

Koala rescued in Australian bushfires drowns after being given water bottle