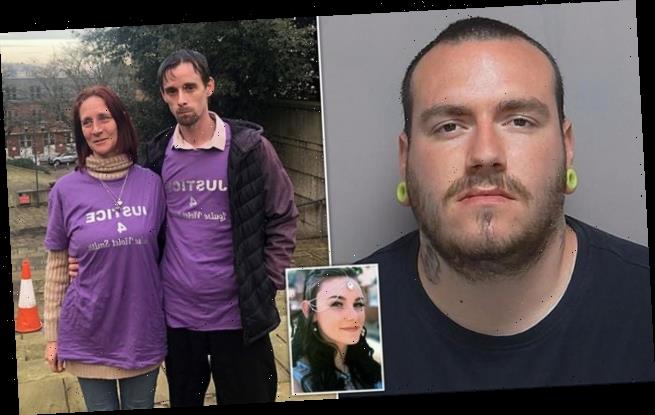 ‘Monster’ uncle’s 25-year jail term for ‘grotesquely and cruelly’ beating his niece, 16, to death and defiling her body will be reviewed after the Solicitor General deemed it ‘too low’

The ‘monster’ killer of 16-year-old Louise Smith will have his sentence reviewed after a top government legal adviser deemed it ‘too low’.

‘Predatory uncle’ Shane Mays was jailed for life, with a minimum term of 25 years, after he was found guilty of the brutal murder of the Hampshire teenager on VE Day last year.

The 30-year-old lured niece Louise to a secluded spot in Havant Thicket before ‘grotesquely and cruelly’ beating her to death, defiling her with a stick and burning her body.

Family members branded Mays ‘pure evil’ and ‘a monster’ after he was found guilty of the teenager’s murder last month.

The sentence, passed at Winchester Crown Court, will now be reviewed at the Court of Appeal after it was referred by the Solicitor General under the Unduly Lenient Sentence scheme.

A spokesperson for the Attorney General’s Office (AGO) told MailOnline: ‘The Solicitor General was shocked by this horrific attack and wishes to express his deepest sympathies to the victim’s family. 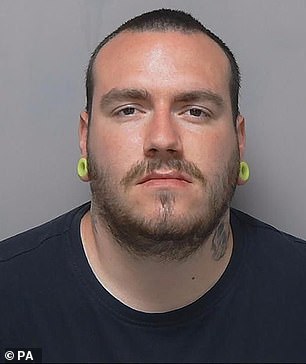 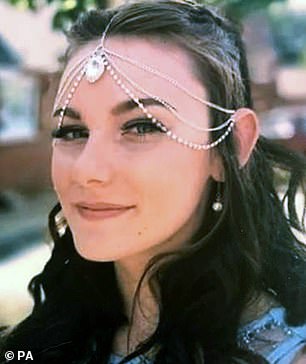 ‘Predatory uncle’ Shane Mays was jailed for life, with a minimum of 25 years, after he was found guilty of the brutal murder of the Portsmouth teenager on VE Day last year. Louise Smith, 16, was brutally murdered in Havant Thicket on VE Day last year

What is the Unduly Lenient Sentence scheme and how does it work?

The Attorney General’s Office (AGO) operates a scheme in which people can apply to have a sentence reviewed if they believe the sentence is ‘unduly lenient’. The scheme is reserved for the most serious cases, including murder and rape.

Anyone can recommend that a sentence be reviewed under the AGO’s scheme – even if they aren’t involved in the case – and only one person has to ask. The request must be made within 28 days of sentencing. Once the Attorney General’s Office has reviewed the case, they may send it to the Court of Appeal who can decide if the sentence should stay the same, be increased if it is ‘unduly lenient’ or they can refuse to hear the case.

Of these, 93 were referred to the Court of Appeal. The Court of Appeal agreed that 64 sentences were too low, and as a result 63 offenders had their sentences increased. A total of 16 people were imprisoned after avoiding prison time at their original sentencing.

‘The Solicitor has referred the sentence of Shane Mays to the Court of Appeal under the Unduly Lenient Sentence (ULS) scheme as he considers it to be too low.’

The Unduly Lenient Sentence scheme allows members of the public to apply to have a sentence extended where they feel it is unduly lenient.

According to the Crown Prosecution Service, this applies when a sentence ‘falls outside the range of sentences which the judge, applying his mind to all the relevant factors, could reasonably consider appropriate’.

The scheme is reserved for the most serious of cases, including murder and rape, and is open for anyone to make an application, including members of the public, friends and family members.

She said Mays had ‘taken a part of my heart away’ by killing her teenager daughter.

In a victim impact statement read to Winchester Crown Court, Ms Cooper said: ‘This would be any parent’s worst nightmare and now it is my nightmare. This is one of the hardest, heartbreaking things I will ever have to do.

‘You have taken a part of my heart away which will never be replaced.

‘You killed my daughter Louise in such a traumatic way but then to do what you did afterwards is beyond words.

‘You are a monster. What gave you the right to do that?

‘You damaged her so bad that I didn’t have a chance to say goodbye, hold her hand or even kiss her. I will never forgive you for this.

‘My daughter was 16, a child just starting her life.

‘Louise was a very strong-willed girl, happy and smiley. She would have done anything for anyone.

‘She had the whole world to look forward to, college, new friends and being able to grow into the person she wanted.

‘One of her dreams was to be a vet. She would have wanted to be a mum.

‘You have taken that dream away from her and us. At 16 years old, her life should have started, not ended.’ 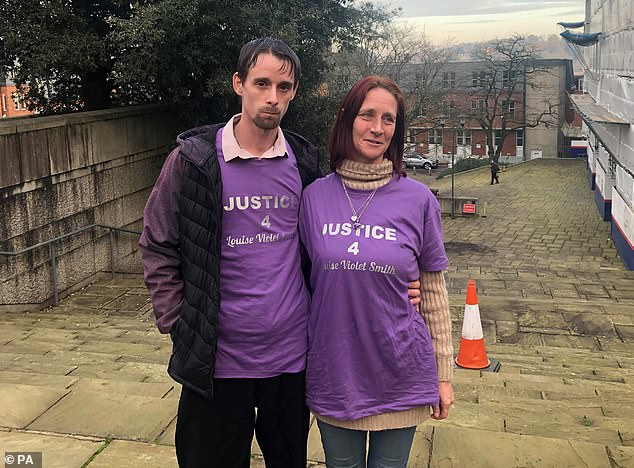 On VE Day last year, Mays lured Louise to a secluded spot in Havant Thicket where he repeatedly punched her in the face, causing her fatal injuries.

He then defiled her with a stick before burning her body, which was found 13 days later following a major police search.

‘Vulnerable’ Louise had moved in with the defendant and his wife Chazlynn Jayne (CJ) Mays – the victim’s aunt – at the end of April after she had ‘quarrelled’ with her mother, the court was told.

But arguments broke out between the trio and Louise complained to her boyfriend, Bradley Kercher, that Mays would ‘flirt’ with her and pin her down, and the jury was shown a Snapchat video of him tickling her feet.

James Newton-Price QC, prosecuting, told the trial: ‘Louise was just 16, she was anxious, needy, fragile and vulnerable, vulnerable to the attentions of a predatory man who was apparently flirting with her and living in the same small flat.’

He suggested Mays had persuaded Louise to walk with him to the woodland by offering her cannabis with the aim of sexually assaulting her. 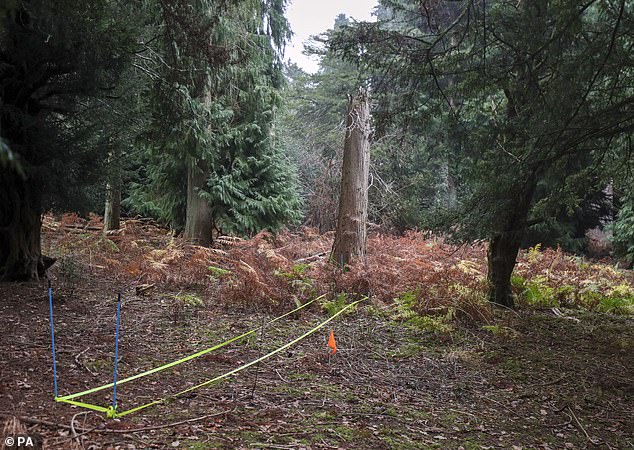 Yellow tape representing a fallen tree trunk and an orange flag marking the spot in woodland at Havant Thicket in Hampshire, where police found Louise’s body

Mays had admitted manslaughter, claiming he had punched Louise when he ‘lost control’ during an argument, but said he did not intend to kill her and denied sexually abusing her.

But the jury found him guilty of murder following a three and a half week trial.

In sentencing, judge, Mrs Justice May, said: ‘Shane Mays was in a position of trust in relation to Louise; theirs was like a father-daughter relationship.

‘That being so, he committed the most gross abuse of trust. I am not persuaded his learning disability tempered this in any way as Shane Mays plainly recognised Louise was young, had mental health difficulties and was in his and CJ’s care.

‘The sudden death of any person is tragic but the death of a vulnerable child is particularly grievous.’ 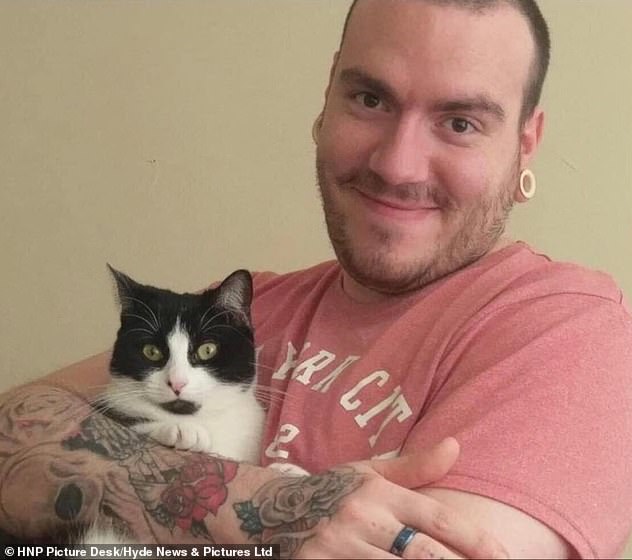 Mays, who admitted taking drugs, like ecstasy and cocaine, in the past had been given a caution for assaulting another boy in 2005 when he was 14-years-old

Speaking after the sentencing, Bradley Smith, who is separated from Louise’s mother said: ‘Since this tragic event my whole life has been turned upside down, I no longer enjoy any activities I used to do.

‘My interactions with other people are now rarer than ever and when they do occur they are very short-lived.

‘This has resulted in me being unable to function at work. My family is in absolute turmoil and we will be for the rest of our lives.

‘My mental and physical health has also been affected with being unable to sleep as I’m tortured by nightmares and I miss my little girl enormously, constantly.

‘I honestly don’t think I will ever recover from this. The best I can hope for is to cope better and I’m positive my family feel the same way.

‘Louise was a beautiful daughter and I have been robbed of what was to be my time with her.’