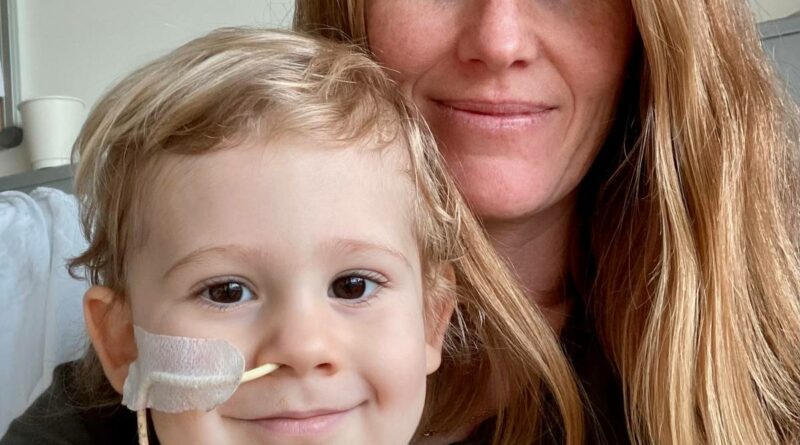 The mother of a 2-year-old boy with a serious heart condition has penned a touching letter to New Zealanders pleading for help to buy beds for the country’s only children’s hospital.

The toddler has cardiomyopathy, a condition where the heart is enlarged, thickened and less efficient.

Specialists think it was most likely triggered by a virus.

Roberton wrote the letter after seeing firsthand the effect of a severe bed shortage at the hospital.

Starship is currently on a fundraising drive for 10 more beds for the most vulnerable babies and children in the Paediatric Intensive Care Unit (PICU).

“Two months ago my world changed forever. My 2-year-old son Theo was admitted to Starship and hasn’t been home since.

“Over this time, he has needed several rounds of a lifesaving infusion to keep his heart stable and because of his fragile state, the infusion is usually administered in PICU,” Roberton writes.

“But when Theo was due to receive his fourth round last week, PICU had no beds.

Theo ended up having the essential infusion on the ward, which was not ideal for the vulnerable little boy.

Roberton said the procedure went well but she was painfully aware of what would have happened if it didn’t -and what the shortage of beds meant for other sick kids.

“The trust I had in the experience of the wards’ medical team gave me confidence it would be ok. And he was ok. But I also knew it wasn’t ideal.”

Roberton said the flow-on effect of the bed shortage was dangerous.

“A child in a less critical state will be moved to a ward, or a non-urgent surgery will be postponed.

“Wards and their medical teams are stretched and under pressure as they care for children who should ideally be in PICU.”

That was not even taking into account the stress on families with seriously ill children.

“I know for a fact that multiple surgeries were postponed last week because there were no beds in PICU,” Roberton said.

The Robertons live in nearby Mt Albert so they take turns staying with Theo and staying at home with their other son, 4-year-old Jack.

Roberton said other families had travelled the length of New Zealand to get treatment.

“Families who had travelled and prepared for this day, anxious and afraid, only to be told to go home and wait a little longer.”

Roberton said she knew too well the trauma of waiting when your child is seriously unwell.

“This needs to change. PICU needs more beds. Just 10 more will make a world of difference.

Roberton said it was easy to turn a blind eye when you have a healthy child.

“That’s exactly what I would’ve thought two months ago. But here I am, with a seriously sick child, so incredibly grateful to the Starship team for their world-class care,” she said.

“I have seen first hand the pressure they are under.”

“Please help PICU get the beds it so desperately needs.”

Cooper wrote to Ardern after his cousin Max had his open-heart surgery delayed five times because of a shortage of beds at PICU.

Cooper said it was unfair the Government planned to spend $250m on new parliamentary buildings when Starship was fundraising for new beds.

The Government has put $25m toward the $40m needed for the hospital expansion project. Starship has another $8m available so $7m more is needed.

Cooper said the Government could trim the budget for the planned six-storey building.

“Why don’t you take $7m from the parliamentary building money and give it to Starship?” he asked.

“It seems like that would be a good solution.”

In the letter, Cooper pointed out that Max lives in Methven and he and his family had to fly up to Auckland and home again each time the surgery was postponed.

“We’re under increasing pressure, we last expanded our bed numbers 12 years ago,” he said.

“We are nearly full every two or three days, and we can manage that currently but we need to do something in the next 12 to 18 months.”

About 1200 children are admitted to PICU every year.

“We can do so much more, and the things we can do now mean that children survive, who might not otherwise,” Dr Beca said.

• Donations can be made online at www.starshipicu.org.nz or by contacting the Starship Foundation directly.

5.5million Brits could be furloughed AGAIN during lockdown 2 as economy to see 2% hit, experts warn