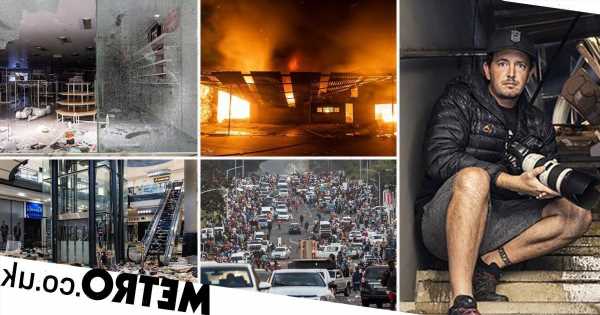 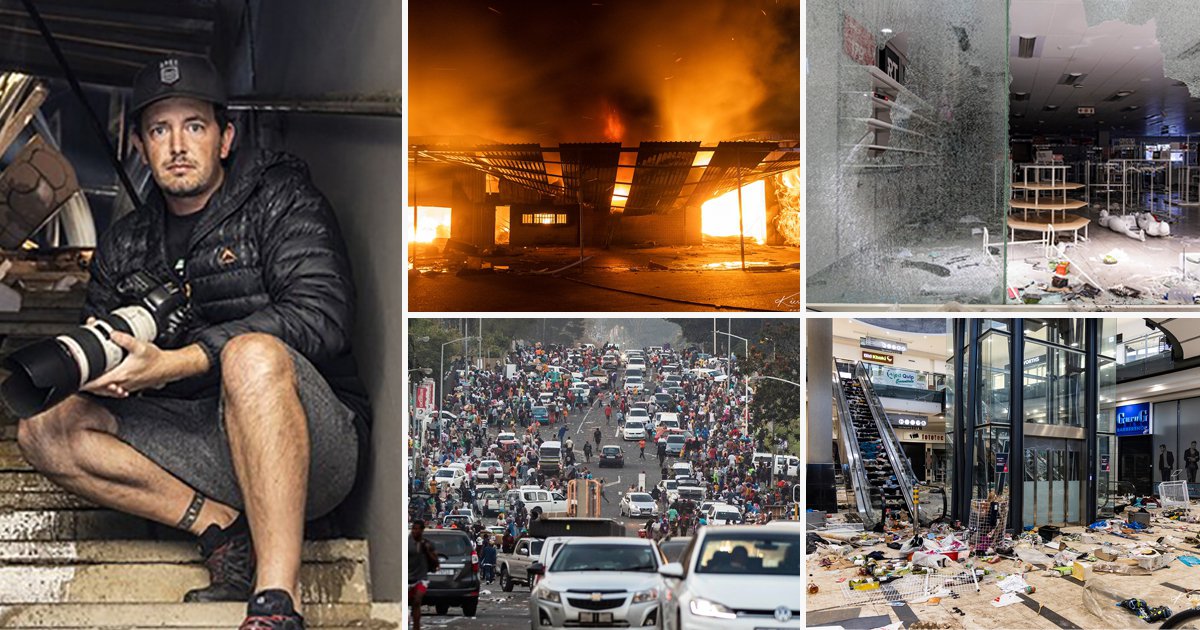 A photographer has described the ‘gut-wrenching’ emotion of watching his city burn as violence and looting rage across South Africa.

Kierran Allen said the devastation being wrought on Durban has spread beyond control in scenes unprecedented in the post-Apartheid era.

Unrest sparked by protests over the jailing of former president Jacob Zuma has escalated into widespread lawlessness, which has claimed 72 lives.

In Durban, in the eastern KwaZulu-Natal province, there was mass looting and rioting this afternoon, with gridlocked roads as thousands of looters ransacked food warehouses.

Many of the vehicles belonged to thieves who were filmed driving away in the Mobeni area with whatever they could load into cars and trucks.

Mr Allen said he has never witnessed so much unrest, despite covering protests around South Africa for 16 years.

‘The entire country has erupted into mass rioting and looting,’ he told Metro.co.uk.

‘There are massive factories burning to the ground, people’s businesses being destroyed, loss of life, and clashes between communities, protesters, police and soldiers. It’s just chaos. It’s actually not a protest any more, it’s not even a riot, it’s just plain looting.

‘There’s a lot of poverty and disadvantaged people in South Africa but they have seen this as an opportunity to take as much as they can.

‘Those people will not be able to go back to the work because their factories and businesses have burnt to the ground.’ 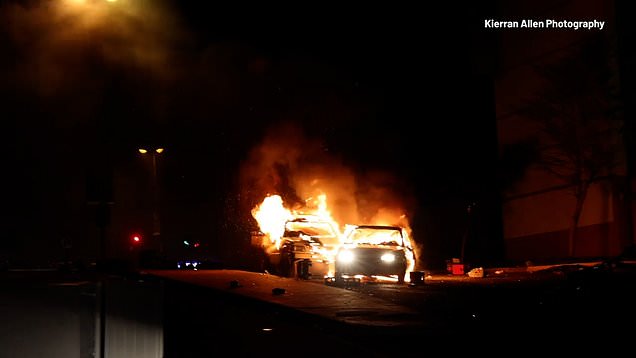 Mr Allen, 31, lives in the Westville district of Durban and has been manning a barricade to protect his neighbourhood.

He said he has had about two hours sleep in four days.

In one shopping mall, the film-maker witnessed people stripping the precinct bare, which included carting out television sets, fridges, washing machines and furniture.

He found the flame-scarred shell of another outlet, a Makro food wholesaler, this morning.

‘There was not one thing left behind,’ Mr Allen said.

‘They set the building on fire and they blew up the ATM. They even stole the solar panels outside.’

Mr Allen, who has family in Surrey, said he feels powerless to act in the face of such enormous destruction.

While millions of people live on the breadline, and have been hard hit by the pandemic, he feels the level of theft and violence is inexcusable.

‘There’s just horrific scenes of chaos and destruction and these factories burning down,’ he said.

‘The fires are so big there’s nothing you can do. It’s gut-wrenching and there are so many mixed emotions it’s almost indescribable.

‘It’s disgusting what the looters are doing, they have taken it a step too far. How do you come back from this? How do you rebuild?

‘It’s driving a massive wedge through the country.’

The police and army were nowhere to be seen as Sky News captured hundreds of looters descending on a warehouse near a port.

In other shocking footage, captured by the BBC, a baby was shown being thrown from a burning building into the arms of rescuers below.

Mr Allen said: ‘The police and army have done a fantastic job but they have just been spread too thin. You cannot respond to an entire country burning down, it’s impossible.

‘If you send a hundred officers to a mall, they are fighting 40,000 people. These are the kind of numbers we are talking about.

‘There’s a store called Massmart and I would say there were 200,000 people there. How do you deal with it?

Zuma, 79, was jailed for contempt of court after failing to appear in front of investigators accused of stealing from taxpayers during his nine-year presidency.

In his absence, he was sentenced to 15 months in prison and on Sunday night he handed himself over to the authorities.

Protests by his supporters then ignited unprecedented levels of lawlessness.

In a first-person piece for Metro.co.uk, journalist Pamela Owen describes how residents in Durban have been kept awake by the sounds of gunfire and looters setting off petrol bombs.

The army was deployed on Monday to quell the disorder, with the police saying on Tuesday that a total of 1,234 people had been arrested.

President Cyril Ramaphosa is set to increase troop numbers from the current 2,500, but has stopped short of declaring a state of emergency.

EU coronavirus war: France and Germany CONDEMNED for selfishness – ‘We don’t have enough!’