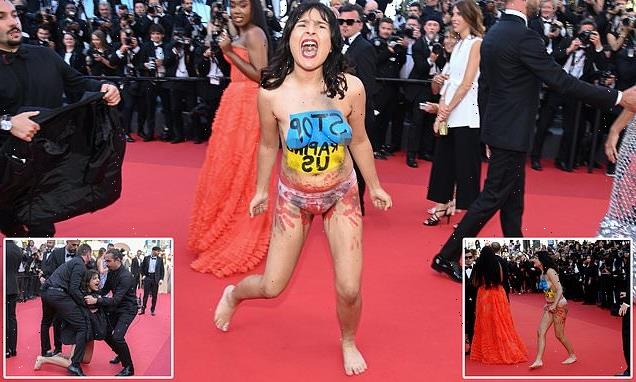 The woman staged her protest during the premiere of George Miller’s Three Thousand Years Of Longing on the fourth day of the prestigious event.

The unidentified protester tore off her clothes during the film’s red carpet procession to reveal the message ‘Stop raping us’ written across her torso next to the blue and yellow colours of the Ukraine flag. 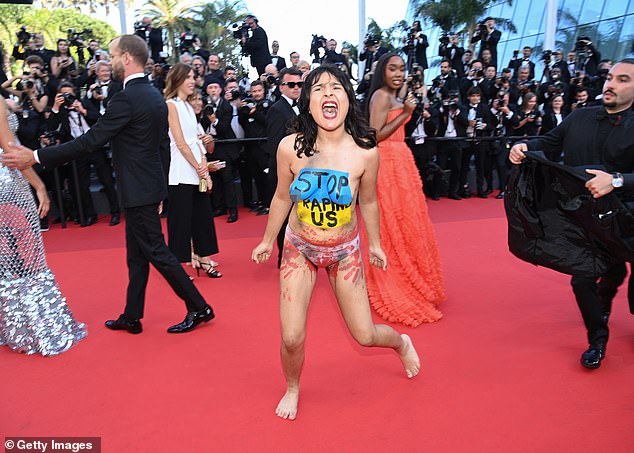 Pictured: A protester crashes the red carpet during the “Three Thousand Years Of Longing 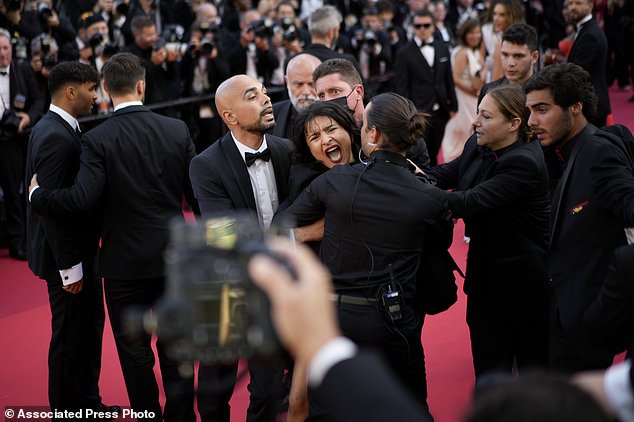 Red was also painted on her legs and groin area.

As she yelled ‘Don’t rape us!’ security guards quickly encircled her and took her off the red carpet.

Russia’s war in Ukraine has often been in the spotlight at this year’s Cannes festival, which is screening several films from Ukrainian filmmakers.

The festival barred Russians with ties to the Kremlin from attending.

Since Russia’s invasion of Ukraine began in February, Putin’s forces have been accused of using rape as a weapon against civilians. 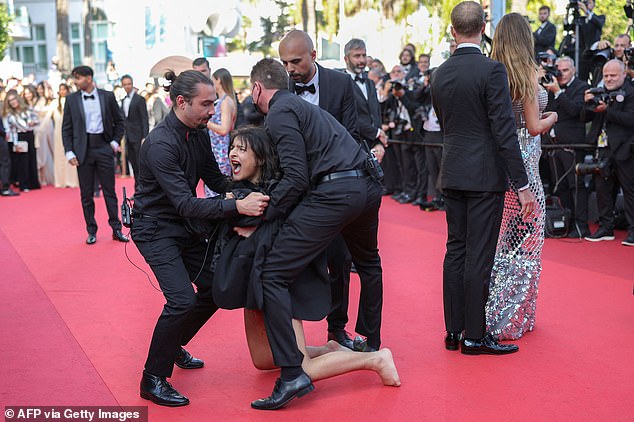 Pictured: Security personnel block the female protester with the Ukrainian national colours painted on the body reading ‘Stop raping us’ protest on the red carpet during the screening

Earlier today, Ukraine accused Russian soldiers of raping children during its occupation of towns and villages surrounding the eastern city of Kharkiv.

They include allegation of the rape and death of a one-year-old baby boy by Russian soldiers.

Other allegations in the report, listed by Ukrainian journalist Iryna Matviyishyn, include the rape of three nine-year-old triplets in front of their mother, the rape of a two-year-old girl who survived, and the rape of two ten-year-old boys, among other unspeakable crimes.

The report comes from Lyudmyla Denisova, the Ukrainian Parliament Commissioner for Human Rights.

Russian forces still control vast swathes of Ukrainian territory and population. In every region that gets liberated, reports emerge of horrific war crimes.

The vast amount of the territories occupied by Russia have not been liberated.

The first Russian soldier to go on trial for war crimes in Ukraine pleaded guilty yesterday.

Remembrance Day in Edmonton: Where you can attend a ceremony in the city