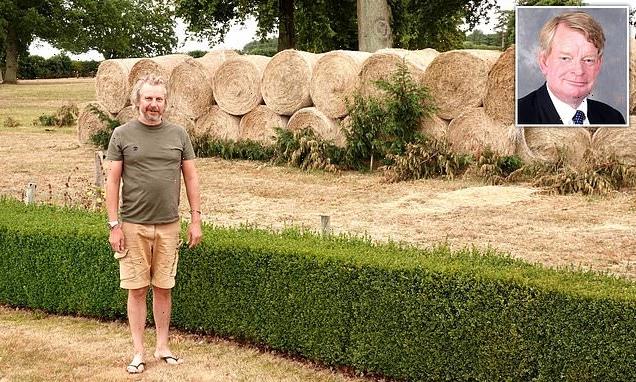 A millionaire ex-police commissioner has been accused of ‘taking revenge’ on his elderly neighbour by building an 8ft high wall of hay bales blocking her view of his £25million estate.

Landowner Stephen Bett, 69, a former Police and Crime Commissioner for Norfolk, created the barrier after the 95 leylandii trees he planted himself were torn down by an unknown person at night.

The line of giant bales, placed close to the boundary of his Norfolk estate, covers the entire 60ft width of the back garden of his neighbour Maxine Turner’s bungalow.

The wall has deprived 78-year-old Mrs Turner of the view she had of the horses in Mr Bett’s parkland meadow, in front of his 18th century mansion in Thornham, Norfolk.

Her son John Turner, 50, who lives with his mother as her carer during the week, accused Mr Bett of putting up the bales as ‘an act of spite’.

But Mr Bett, who was Norfolk’s independent PCC from 2012 until 2016, said he did not want to look at his neighbours ‘barbecuing and putting their washing out’. 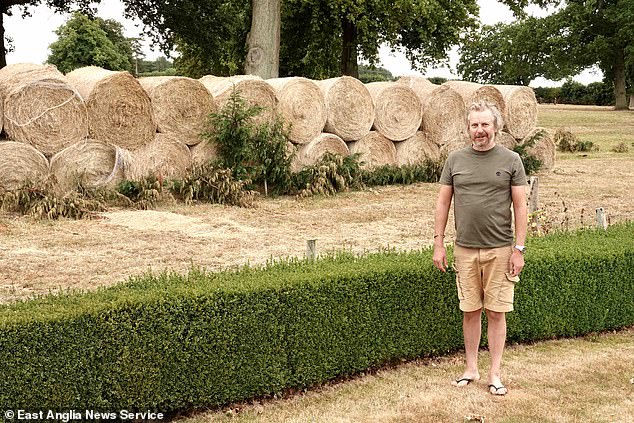 John Turner, 50, has accused Mr Bett of putting the bales up out of spite’ after someone tore down his leylandii hedge. Pictured: John Turner beside the hay and straw bales blocking the view from his mother’s garden 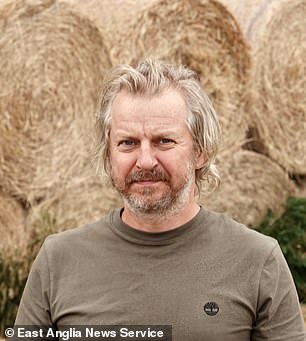 John Turner (left) who lives with his mother Maxine Turner, 78, as her carer, said she has been deprived of the view she previously had of the horses in wealthy landowner and former Norfolk Police and Crime Commissioner Stephen Bett’s (right) parkland meadow in front of his 18th century mansion 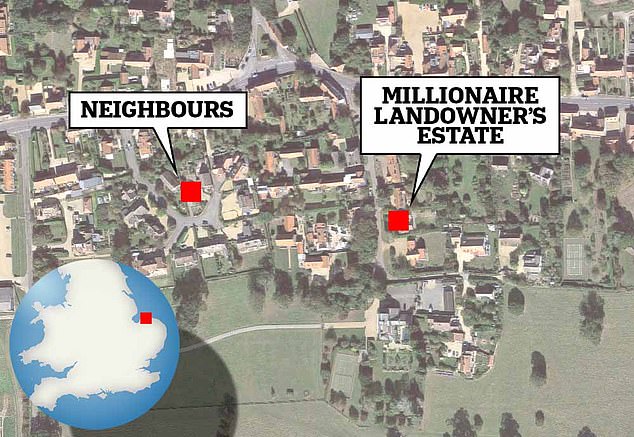 Mr Turner, a part time gardener, said: ‘It looks like he is blaming me for cutting down his leylandii because I am one of the youngest people around here – but I didn’t do it.

‘He has only placed the bales outside my mother’s home and not any of the other neighbour’s houses because he wanted to upset us.

‘Mr Bett has hundreds of acres of farmland and he could have put them anywhere – but he chose to put them here.

‘My mother has multiple sclerosis and macular degeneration so her eyesight is failing.

‘Looking out on the horses on the meadow was a real pleasure for her – but now all she can see is this wall made of straw.

‘She has lived here for 40 years and has never seen anything like it. Until now the bales always used to be somewhere else on his land.’ ‘Looking out on the horses on the meadow was a real pleasure for her – but now all she can see is this wall made of straw,’ said said John Turner, the son of Mrs Turner whose eyesight is failing

Mr Turner said Mr Bett upset locals around three-years-ago by planting a strip of leylandii trees close to his border to screen his view of around four homes including his mother’s three bedroom bungalow in a cul de sac called Shepherds Pightle.

The line of conifers which started off as 18 inch high saplings grew to a height of about ten feet before 95 of them were hacked down by a mystery attacker on the night of July 2.

Mr Bett’s staff responded by building a wall from bales opposite Mrs Turner’s garden, stacked on their ends on top of one another to initially form a 11ft high barrier.

Mr Turner was enraged to see the wall and stormed round to Mr Bett’s mansion Thornham Hall to complain.

He admits that he lost his temper when talking to a 25-year-old housekeeper who was at the house while Mr Bett was on holiday.

Mr Turner said he went back and knocked down the wall by toppling over the top bales which weighed around 600lbs each.

But Mr Bett has since rebuilt it, using a digger to put the bales on their sides so the structure is slightly lower at around 8ft high and more sturdy, making it almost impossible to knock over.

Mr Turner told how he confronted Mr Bett in the village shop, and demanded to know why he had built it.

He said: ‘I told him that I had not cut his leylandii down and it was nothing to do with me.

‘I asked him what he was playing at, and he replied that he was fed up at looking at our washing when he was driving down his drive.

‘I questioned why he was suddenly doing it now when he had been using his driveway for years, and he looked like he was going to explode with rage.’

Mr Turner said he had since received a letter from Mr Bett, saying that he was going to replant his trees, and erect a fence with ‘other more covert security’ to protect them.

His letter added: ‘We would now seem to have a ‘neighbour dispute’. I believe you were thinking of selling your mother’s house in due course.

‘You will no doubt inform the selling agents of this issue as such things are disclosable by law when it comes to selling a house these days.’

Mr Turner said he regarded the letter as threatening him by warning that the value of his widowed mother’s house could be hit.

He said that police visited him and warned him about his confrontation with Mr Bett’s housekeeper.

Mr Bett whose father Frank, 89, died two-years-ago, added: ‘I just saw red when I saw this pile of bales. It took a lot of effort to push them over.

‘The horses came over to open up some of the bales on the ground and eat some of the hay – but now they are back again.

‘The police came round after I spoke to Mr Bett’s housekeeper, and they didn’t really want to get involved. They just advised me not to do anything.

‘The officer said he thought the whole thing was a bit silly and he did not want it to go any further. The officer asked how it could be reconciled, and I said it could be done if Mr Bett moved the bales.

‘The fact is that he is trying to intimidate me out of spite. My mother is absolutely devastated. She can’t believe this is happening.’ 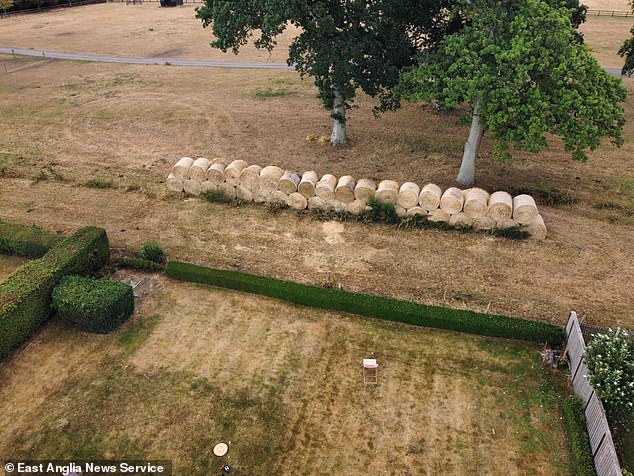 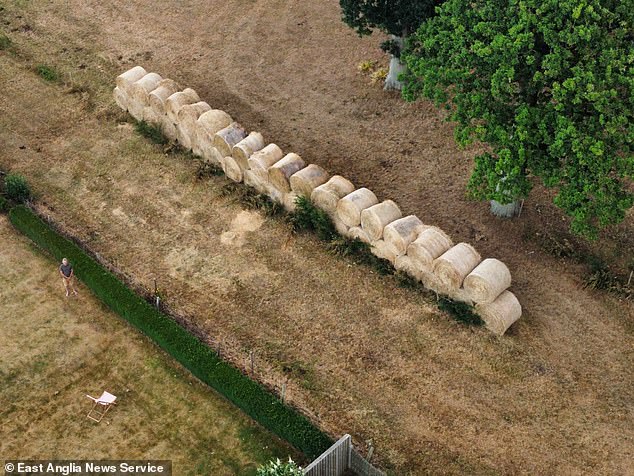 Mr Turner said he went back and knocked down the wall by toppling over the top bales which weighed around 600lbs each. But Mr Bett has since rebuilt it, using a digger to put the bales on their sides so the structure is slightly lower at around 8ft high and more sturdy, making it almost impossible to knock over

Mr Turner said he was also told by North Norfolk District Council that Mr Bett was entitled to put his bales where he wanted on his 2,000 acres of land.

Mr Bett who was Norfolk’s independent PCC between 2012 and 2016 said: ‘This all happened when I was out of the country in France.’

He confirmed that he had reported the loss of his 95 leylandii trees to police, but officers had told him nothing could be done as it was not known who was responsible.

Mr Bett said ‘They said that unless we could prove who had done it, there was nothing they could do. It is understandable because it was done in the middle of the night.

‘It was done in front of his (Mr Turner’s) property. I have no idea whether he did it or not, and I don’t know who did it, but it was done.’

Mr Bett added: ‘The police were called as he came round and was extremely abusive and intimidating to a young lady working for us who had no idea what he was talking about.

‘My son found her in floods of tears and all the doors locked in the house because of his actions.

‘As far as Mr Turner is concerned, he has no right to a view. It’s on our property He thinks he is entitled to a view, but he is not.

‘To be honest, I don’t particularly want to see these people in their gardens, barbecuing and putting their washing out.

‘They have cut down their hedges to get a view, but it is not a good view for me. Why should I have to look at what they are doing?

‘Their privacy doesn’t seem to interest them, but I prefer privacy, so I put a hedge up, and that’s been cut down.’ 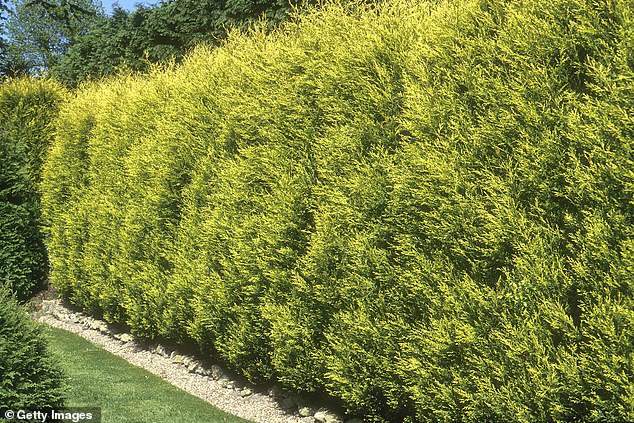 Mr Turner said the beginnings of the row was when Mr Bett upset locals around three-years-ago by planting a strip of leylandii trees close to his border to screen his view of around four homes including his mother’s three bedroom bungalow in a cul de sac called Shepherds Pightle. The line of conifers which started off as 18 inch high saplings grew to a height of about ten feet before 95 of them were hacked down by a mystery attacker on the night of July 2. Pictured: Stock image of a leylandii hedge

Mr Bett said he had simply pointed out to Mr Turner that prospective home buyers had to be informed of any neighbourhood disputes by anyone selling a property.

He denied that his letter was a threat, and insisted that he was just ‘stating a fact’.

He added: ‘There is nothing much to say. He wants a view over my property, but I don’t want to look over his property.

‘He has cut down his hedge which he is quite entitled to do. I wouldn’t try and stop him.

‘But to say, I am spoiling his view is totally wrong. I am protecting my view. It is my property. Why shouldn’t I?

‘He has hedges down the side of his property next to his neighbours. Why does he do that?

‘We have got a roadway coming down to our house and we really don’t want to look at what other people are doing in their gardens.’

A Norfolk Police spokesperson said: ‘Police were called to reports of criminal damage to trees overnight on Saturday July 2.

‘The incident happened at a property off Hall Lane, Thornham. Following an investigation, all lines of enquiry have been exhausted pending any further information. The victim has been informed and crime prevention advice given.’

Mr Bett was at the centre of controversy as Norfolk’s first PCC when it was revealed that he had been claiming expenses of £43.20 for every 96 mile round trip he made between his home and the Norfolk Police HQ at Wymondham.

He claimed he was entitled to the cash as he was using his home as his official office.

Mr Bett insisted he had done nothing wrong, but said he would not be making future claims for trips between his home and the police HQ where his 15 staff were based.

He was cleared of dishonesty and found not to have committed a criminal act after an investigation by the City of London Police under the direction of the Independent Police Complaints Commission.

BBC Weather: Europe to be scorched with temperatures to soar ‘well above seasonal average’ 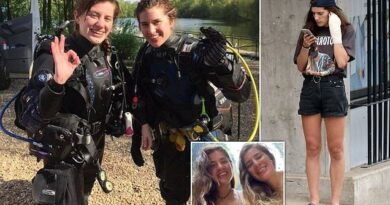