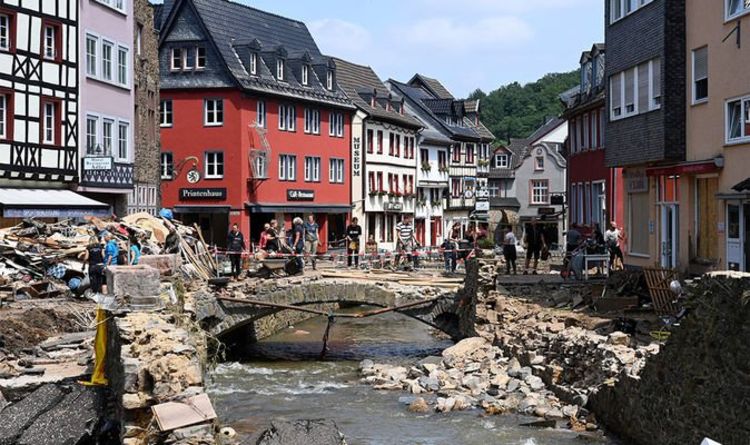 At least 171 people were killed in Germany when several small rivers merged quickly into raging torrents after the country saw persistent heavy rainfall last week. German Chancellor Angela Merkel visited the devastated Rhineland-Palatinate and North Rhine-Westphalia areas on Sunday. Mrs Merkel said that she was overwhelmed by the “surreal, eerie” scenes that she had seen.

She has also approved a 400m euro package of immediate aid for victims of last week’s floods and vowed to get started on rebuilding the affected areas quickly.

The German government is expected to spend billions on rebuilding, but the cost of the operation will not be clear until authorities have a better overview of the extent of the damage.

Now, however, as the flood waters have started to retreat, meteorologists have warned that new storms with heavy rain will be present in the area over the weekend.

The weather is expected to remain calm up to and including Friday, but that will change when the new thunderstorms will arrive from France and Benelux.

Patrick Panke, RTL meteorologist, said: ” From the west, the next low is coming to us in Germany.

“However, it cannot be compared with the previous low, which has been named Bernd in Germany.”

Mr Panke added: “It will move on relatively quickly and will not take on these devastating proportions. Nevertheless, there is a risk of renewed storms locally due to heavy rain, hail and squalls!”

He continued: “Unfortunately, Rhineland-Palatinate and North Rhine-Westphalia will also be affected by the storms on Saturday.

“Later on, it will also be Hesse and Thuringia, all the way down to Baden-Württemberg and Bavaria.

“The risk of local storms will also be different than it was with Bernd.”

Mr Panke added: “The big difference to BERND is that the coming low is a ‘normal thunderstorm low’ and is not such an extreme low that settles over Germany for 72 hours.

“And as is the case with these thunderstorms, at this point in time, it is not yet possible to make very precise predictions about where and who it will hit.”

The amount of rain that is expected to hit the area will range between 20 to 40 litres per square metre.

But compared to the previous storm, which brought 100-200 litres per square metre, it will be relatively low.

Dr Karsten Brandt, a climatologist, added: ” There can be local storms again. Certainly not nationwide, but there can be warnings again for the large Alpine region until the end of the month – a lot of water from low-pressure systems.”

Despite the storms being milder they do not come without a warning.

The soil in the flooded areas remains very soft and torn up, which means that the new thunderstorms can trigger new landslide and briefly increase river levels.

Mr Jung said: “We do not expect extensive precipitation like last Wednesday and Thursday, but there can be strong regional thunderstorms. It is important to keep a close eye on this situation.”

German Weather Service’s (DWD) website stated on Tuesday morning that on Saturday western Germany can expect a lot of clouds with showers and occasional thunderstorms.

DWD’s meteorologist Andreas Friedrich said: “There are still no DWD warnings for the weekend, it is still too early to say.

“This is currently dealt with in our weekly forecast of dangerous weather as part of our time-graded warning management. Local storms can occur again from the weekend.”

He added: “But only locally and for a short time, not comparable with the storms in Berchtesgadener Land and in North Rhine-Westphalia and Rhineland-Palatinate.”