NSW has recorded 18 local COVID-19 cases, including six linked to a new Croydon cluster and three which were announced.

The inner west cluster is related to interaction between members of an extended family over a number of days. However, Chief Health Officer Dr Kerry Chant expects more cases to emerge linked to this new cluster in coming days. She said there were growing concerns of an "unrecognised spread". 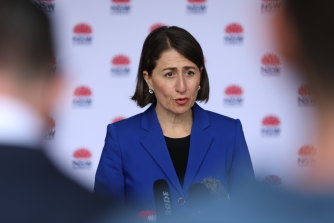 "We are expecting that there will be additional cases linked to that cluster just because of the number of close contacts [they] had over the period of Christmas and the preceding days," Dr Chant said.

Nine cases are linked to the Avalon cluster and six are linked to a new Croydon cluster. Two cases in Wollongong are being investigated, as is one in the northern beaches.

Premier Gladys Berejiklian announced new restrictions for New Year's Eve celebrations in Sydney. Household gatherings have been reduced to a maximum of five people in greater Sydney, as well as Wollongong, the Central Coast and Blue Mountains.

The maximum size of outdoor gatherings is now 30 people, down from 50.

"We don't want New Year's Eve to be the cause of a super-spreader [event]," the Premier said. "It only takes one person in [a] family gathering to give it to everybody else in the family."

The changes are "until further notice".

Meanwhile, Victoria's COVID-19 testing chief says it's still too early to know when the state will remove travel restrictions for people travelling from Sydney.

Jeroen Weimar indicated it could be several weeks until the NSW border is fully open again.

Stay across the news you need to know related to the pandemic. Sent Monday and Thursday. Sign up here.

Moment cops kill babyfaced boy, 16, with shot to the head as he ran AWAY from them – before officer is told ‘good shot’ – The Sun