When six-year-old Hannah heard about the new "singles bubble" for Melbourne’s extended stage four lockdown, she asked her mother why there couldn’t be a single child bubble, too.

Katie Maynes says her daughter’s only-child status has provided an extra challenge during the long weeks of remote learning, as she and her husband have worried that Hannah is being starved of social contact with other children. 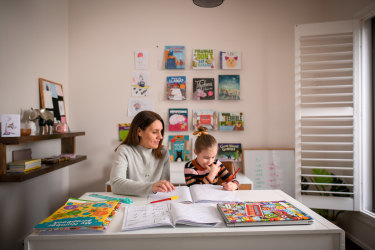 Katie Maynes and her daughter Hannah, 6, have gradually got into the swing of remote learning. Credit:Eddie Jim

"We’re lucky, she plays really well by herself but she hasn’t played with another child for two months," Ms Maynes said.

Hannah is in prep at Plenty Valley Christian College in Doreen. By the time term three wraps up next week, she will have spent more days in her first year of school learning at home than in the classroom.

Ms Maynes is full of praise for Hannah’s teachers who have gone "above and beyond", helping Hannah fix an early problem with her pencil grip, for example.

And while the challenge of juggling work with learning supervision duties – and keeping a child focused during yet another Zoom session – has been manageable, it has not always been rewarding.

"The year has been really disappointing for a first year of school and we have definitely worried, my husband and me, that we’re not putting in enough time; there is a thing called remote learning guilt," she said.

The results of a recent survey about remote learning suggest Hannah’s parents have plenty of company regarding their concerns about the lockdown’s effect on their child’s social development.

According to the national survey of 5048 parents, including 1398 Victorian respondents, 44 per cent of Victorian parents of school-aged children have worried about this, while 39 per cent feared their children have not got enough physical activity in lockdown.

The Real Insurance survey also found a high degree of parental concern about children's mental health, with 54.5 per cent of respondents of the view that remote schooling had had a negative effect, although one-third of those said the effect was short-lived.

Ms Maynes said she and Hannah had got into a better groove with remote learning during the second phase of lockdown.

Ms Maynes said she accepted the news on the weekend that a return to face-to-face learning had been delayed until the second week of term four with weary resignation.

"I'm trying to keep myself off social media because I think if I look into all of that it would just get me upset," she said.

Dr Emily Berger, a lecturer in educational psychology with Monash University's Faculty of Education, said children's mental health in lockdown could often be affected by the mental health of others in their family.

However, overseas research had shown the wellbeing of both adults and children had bounced back once the pandemic lockdowns ended.

"People might have depression or depression symptoms during a pandemic but those depressive symptoms become better, so there is a hopeful message there that mental health does improve," Dr Berger said.

BBC Weather: Britain set for THUNDERSTORMS this week as temperatures PLUMMET to -6C