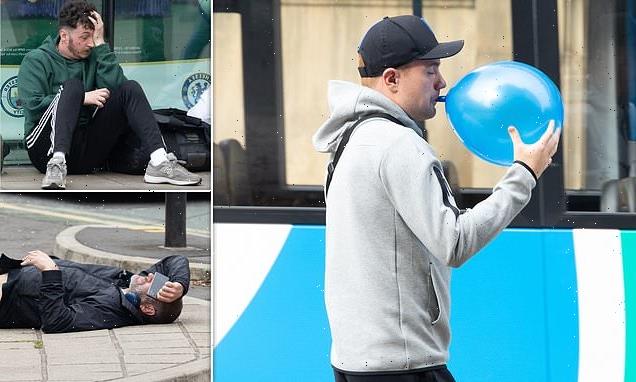 Isn’t it time to call it a night? Revellers are spotted vomiting in city centre gardens and lying passed out on pavements after partying all weekend at Park Life festival

Some of the revellers who enjoyed a weekend at the Park Life festival in Manchester have been seen recovering from the festivities – as they vomit and lay on the ground.

As many as 80,000 people made their way to the city to attend the Park Life Festival over the weekend, which took place across a two-day period.

However, despite the event coming to a close yesterday, some people could be seen littered across the centre of the city as they made their way back home.

Though festivities have now come to an end, one man could be seen inhaling from a blue balloon as he wandered through the centre of Manchester. 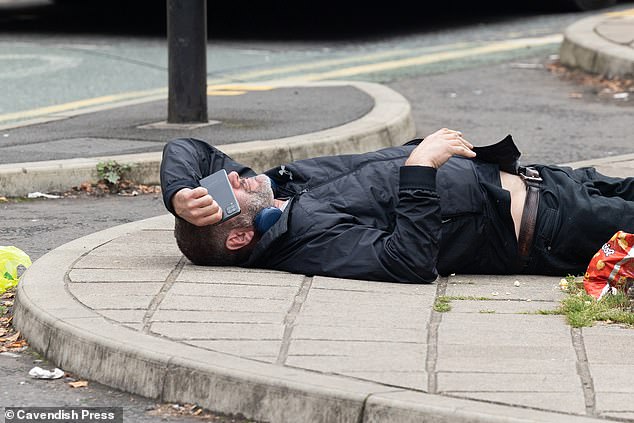 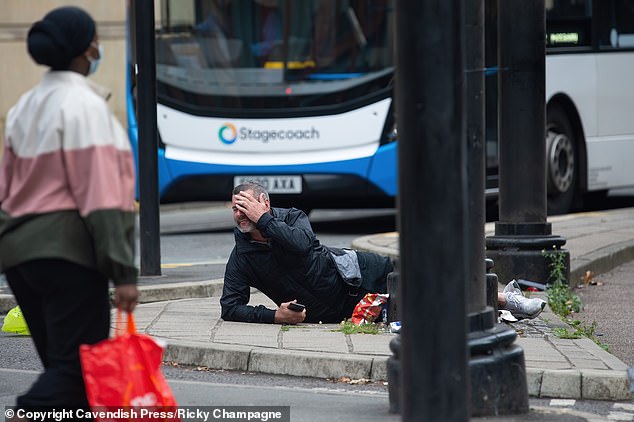 A man is seen lying on the pavement in Manchester earlier today, with a hand held up to his head, as a bus and pedestrians go past 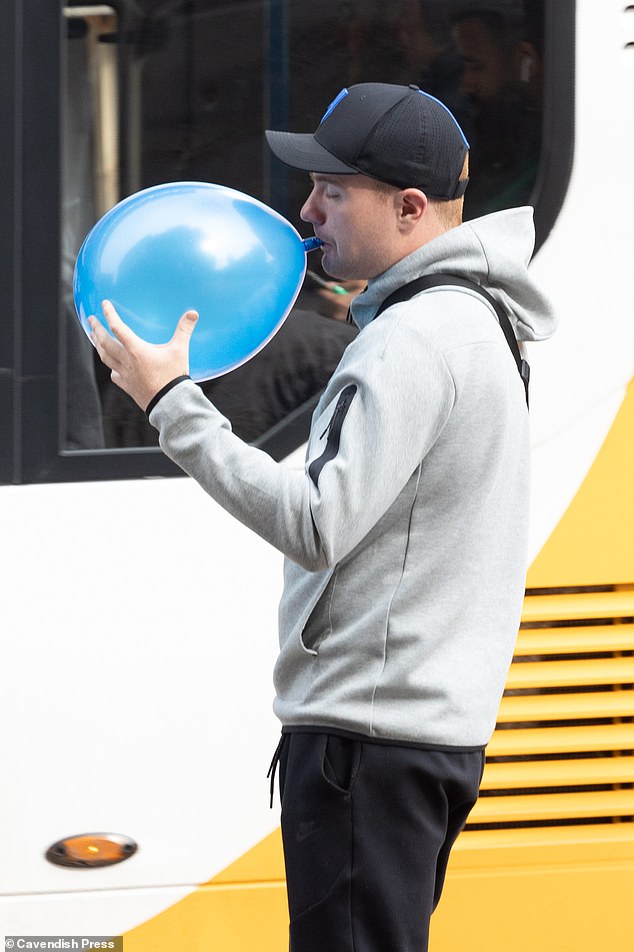 As many as 80,000 people made their way to the city to attend the Park Life Festival over the weekend, which took place across a two-day period. Pictured: A reveller inhales from a blue balloon in Manchester earlier today

Clearly suffering from the effects of a fully-loaded weekend, one man was also seen laying down on the pavement next to a road, used by buses, holding an arm up to his head.

Another photo showed he had managed to roll over onto his front as pedestrians walked past.

Meanwhile a group of friends, waiting outside of Piccadilly train station in Manchester were spotted lying on the floor, slumped up against the side of the station.

Elsewhere, two men, stood next to a metal gate and a tree can be seen vomiting onto the floor as they began recovering from the weekend’s festival. 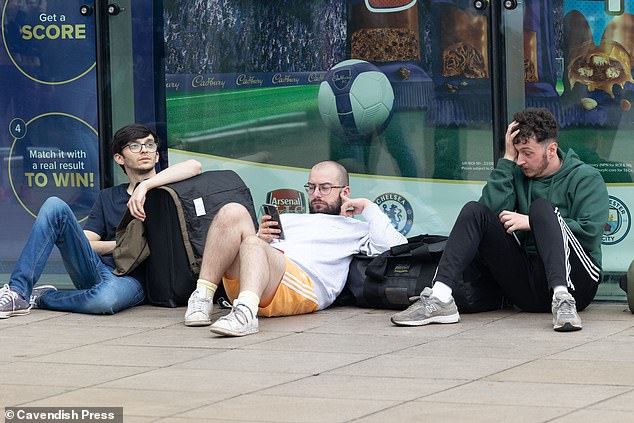 Despite the event coming to a close yesterday, some people could be seen littered across the centre of the city as they made their way back home

Temperatures peaked at around 77F (25C) yesterday on the final day of the festival, with those attending taking every opportunity to soak up the sun as they left plenty of flesh on show.

Hotpants, chaps, bikinis and fanny packs were the order of the day yesterday as Dave and Megan Thee Stallion were among the big acts who took to the stage and sent the packed festival into raptures.

Skepta, Jamie XX and Eric Prydz were among Sunday’s headliners charged with closing out the festival as tens of thousands of people looked to end the weekend on a high.

With just a negative lateral flow test needed to get into the festival, the grounds were heaving with festival goers eager to go big after a year and a half of restrictions. 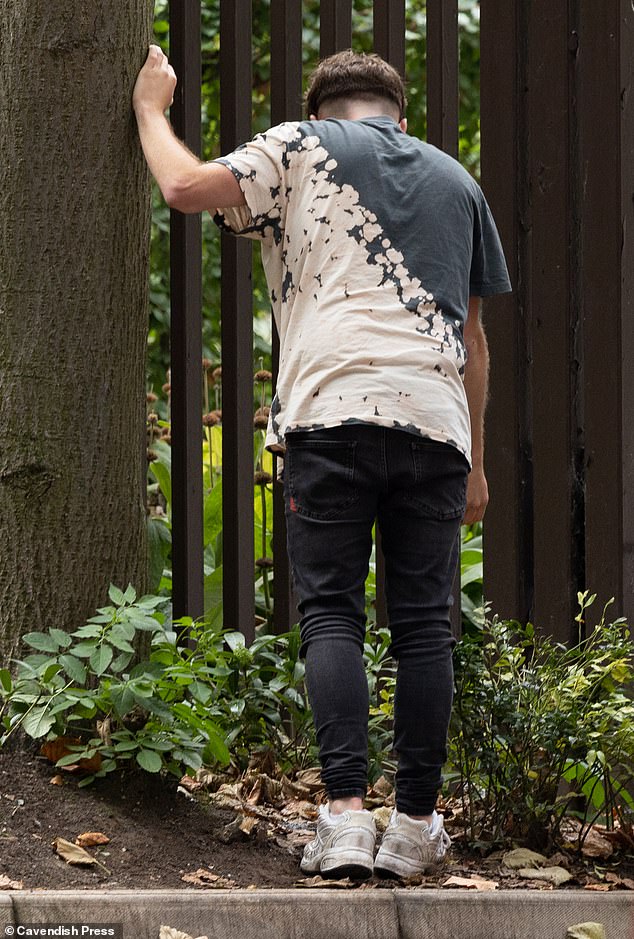 After rising to his feet, the man began vomiting into the gardens of a Manchester city centre office 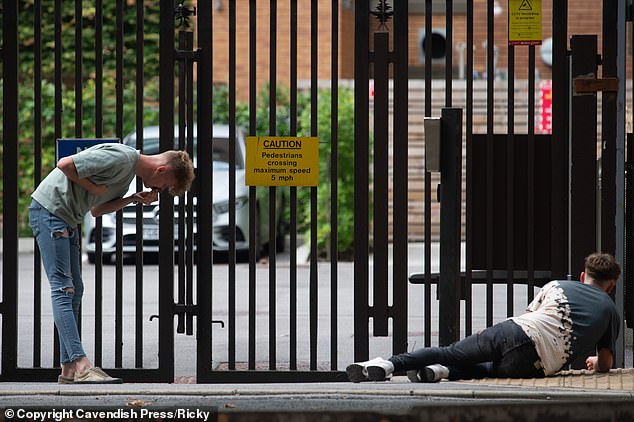 Facemasks were not compulsory inside the festival but revellers were required to provide proof of either a negative lateral flow test, full vaccination or natural immunity before they are allowed in.

The organisers also introduced a new cashless system to reduce the contact time between festival-goers and staff and speed up the queues.

As a result of the Covid-19 pandemic last year’s festival was cancelled. This year up to 50,000 fans were allowed on site daily, with around 80,000 fans having attended across the weekend. 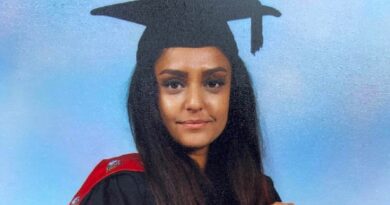