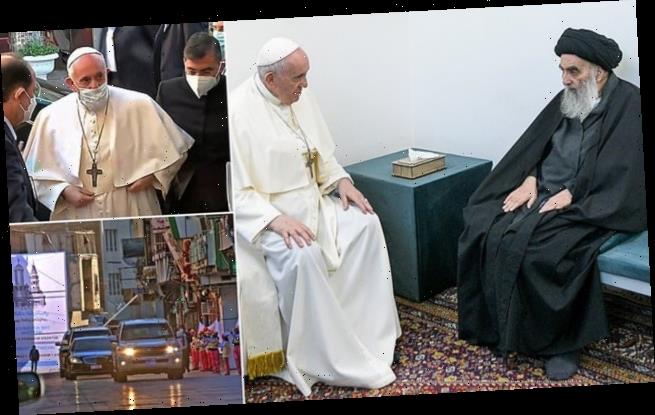 The 84-year-old, who defied security fears and the pandemic to become the first pontiff to travel to the Gulf, met with the Grand Ayatollah in Najaf as his four-day trip continued.

Pope Francis, who said he was travelling to Iraq as a ‘pilgrim of peace’ on his first foreign trip since Covid-19 struck, was driven to the home of the Ayatollah in a bullet-proof vehicle on Saturday morning.

Children had lined the streets and waved Iraqi and Vatican flags to mark his arrival.

The meeting was unusual for al-Sistani, 90, who rarely sees world leaders. 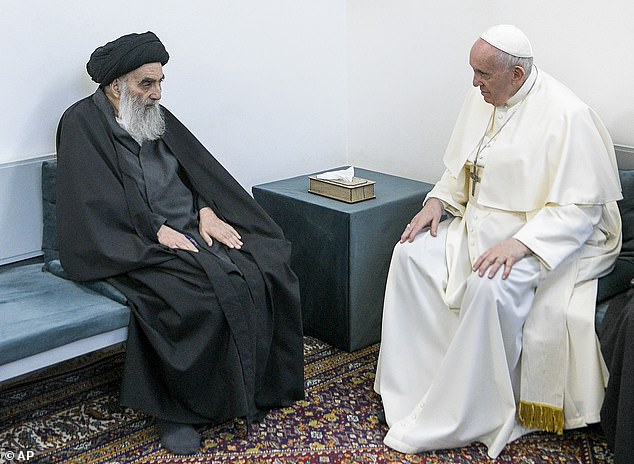 The 84-year-old, who defied security fears and the pandemic to become the first pontiff to travel to Iraq, met with the Grand Ayatollah in Najaf today on the second of his four-day trip

Following the hour-long discussion, Pope Francis travelled to the ruins of Ur in southern Iraq, revered as the birthplace of Abraham, father of Judaism, Christianity and Islam.

He will later fly back to Baghdad, where he is expected to deliver mass at the Chaldean Cathedral of Saint Joseph.

Al-Sistani is one of the most influential figures in Shia Islam, and has previously refused to meet with Iraq’s current and former Prime Ministers.

It is understood he agreed to speak with the Pope on the condition that no Iraqi officials would be present.

The meeting took place inside al-Sistani’s home, which he has rented for decades in Najaf.

The Pope left Rome early on Friday for the four-day trip, his first abroad since the onset of the Covid-19 pandemic, which left the leader of the world’s 1.3 billion Catholics saying he felt ‘caged’ inside the Vatican. 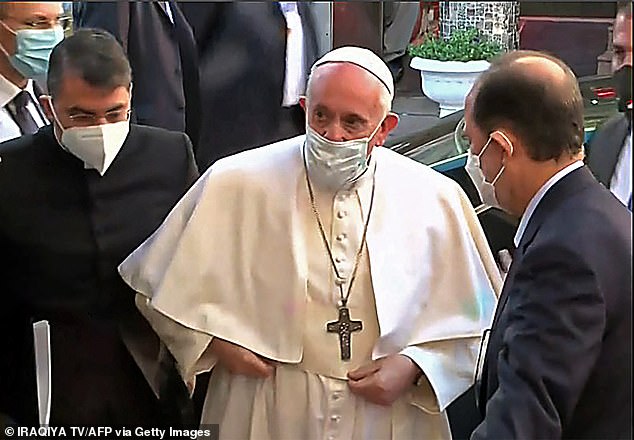 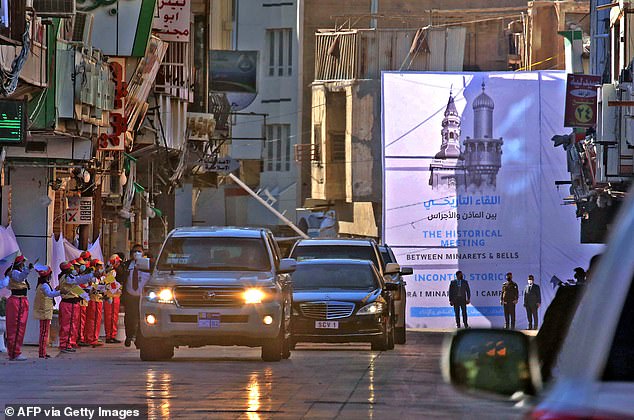 He yesterday made an impassioned call for peace, as he pleaded with his hosts for an ‘end to acts of violence and extremism, factions and intolerance.’

The pontiff urged religious faiths to ‘look beyond our differences’ in a country ravaged by ISIS that is home to one of the world’s most persecuted Christian communities.

Delivering a message of hope to worshippers in Iraq, he paid tribute to the ‘age-old presence of Christians in this land, and their contributions to the life of the nation’.

But he also reached out to Yazidis who were killed and tormented by ISIS, saying that ‘here, among so many who have suffered, my thoughts turn to the Yazidis, innocent victims of senseless and brutal atrocities’.

‘Only if we learn to look beyond our differences and see each other as members of the same human family will we be able to begin an effective process of rebuilding and leave to future generations a better, more just and more humane world,’ he said, describing religious minorities as a ‘precious resource’ to be protected.

He also urged Iraqi officials to ‘combat the scourge of corruption, misuse of power and disregard for law,’ in a country consistently ranked one of the most graft-tainted by global watchdogs. 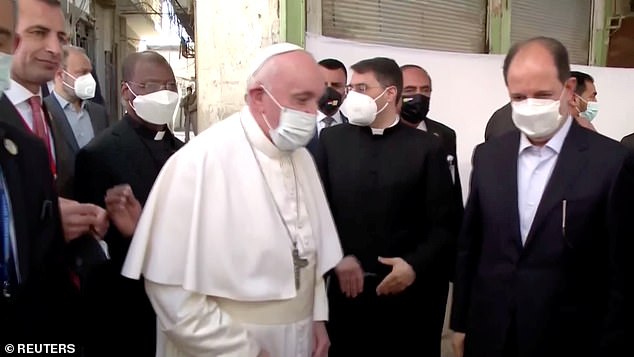 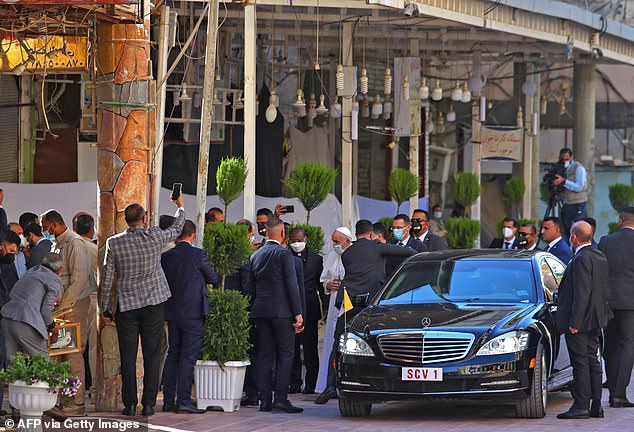 The meeting was highly unusual for al-Sistani, 90, who rarely sees world leaders 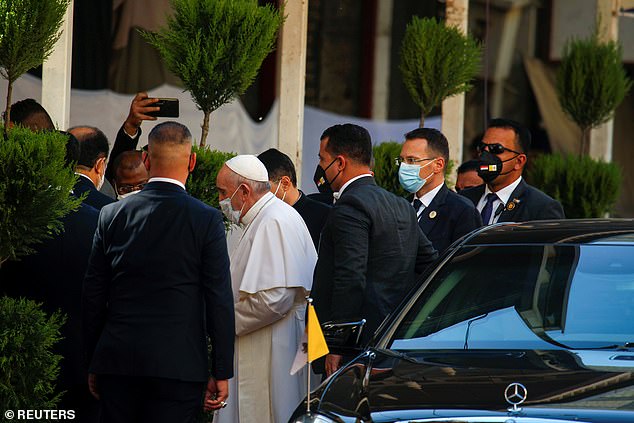 Pope Francis, the first to meet with such a senior Shi’ite cleric, was driven to the home of the Ayatollah in a bullet-proof vehicle on Saturday morning 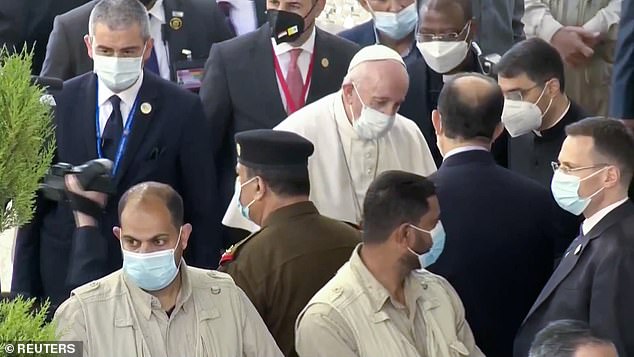 The Pope left Rome early Friday for the four-day trip, his first abroad since the onset of the Covid-19 pandemic 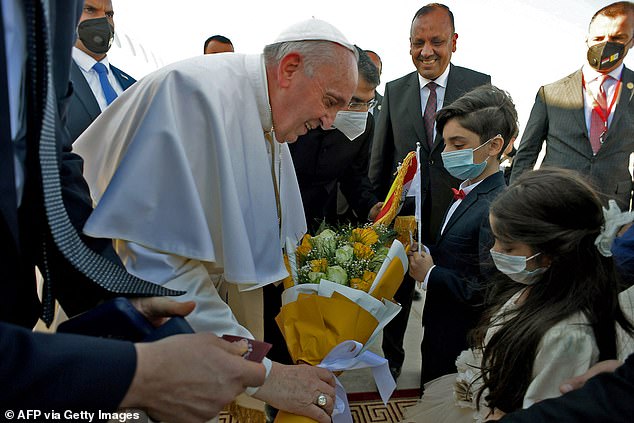 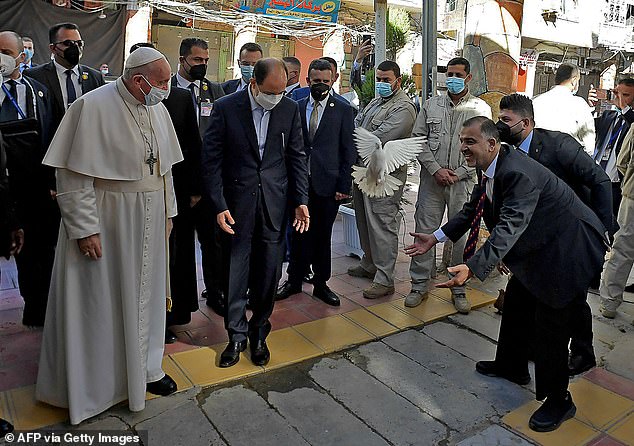 Pope Francis landed in the Gulf at 1.55pm on Friday, the plane flying the flags of both Vatican City and Iraq as it taxied on the tarmac at Baghdad International Airport, where Prime Minister Mustafa al-Kadhemi greeted him.

‘With love and peace, Iraq’s people and government are welcoming His Holiness Pope Francis and reaffirming the depths of this humanitarian bond,’ Kadhemi said ahead of the pope’s arrival.

Francis subsequently met Iraqi president Barham Salih and other authorities gathered at the Baghdad palace inside the heavily fortified Green Zone, telling them that no one should be considered a second-class citizen.

He said Iraqis of all faiths deserve to have the same rights and protections as the Shiite Muslim majority, in a country facing turmoil beset by both political violence and the effects of the pandemic.

While Francis has been vaccinated, Iraq has been gripped by a second wave of infection with 5,000 plus new cases a day, prompting authorities to impose a full lockdown during the pontiff’s visit. 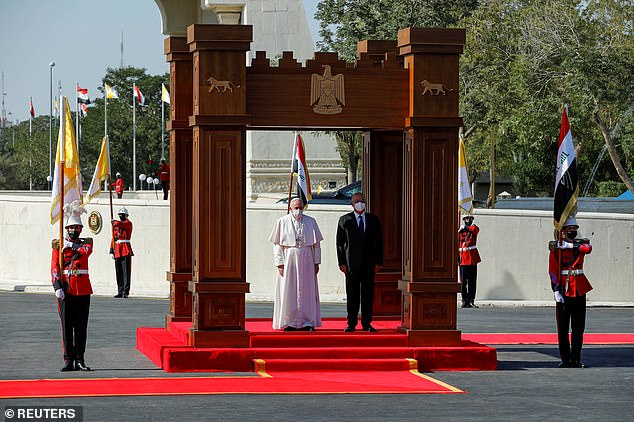 Iraq’s President Barham Salih welcomes Pope Francis during a ceremony at the presidential palace in Baghdad, where the pontiff made a rousing call for peace and urged an end to religious factionalism 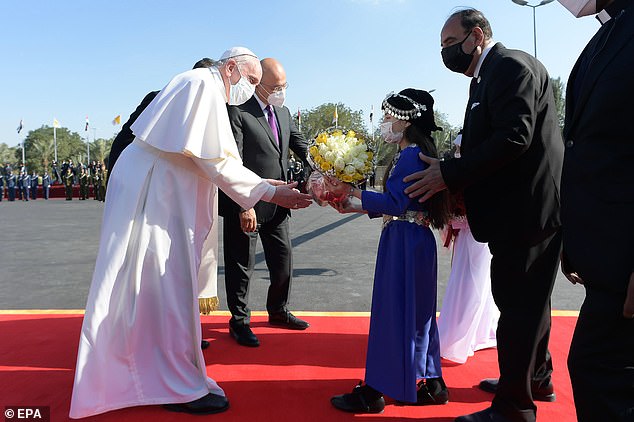 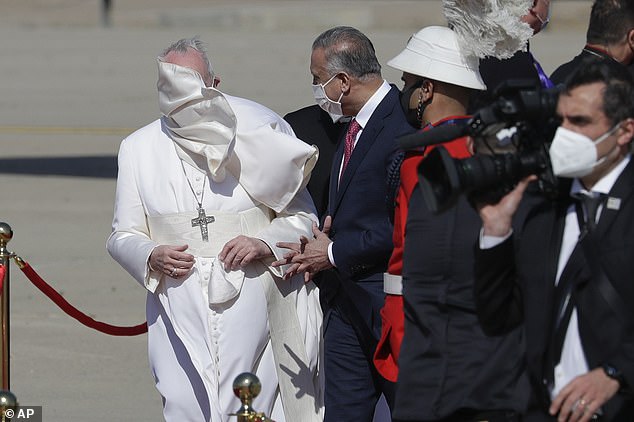 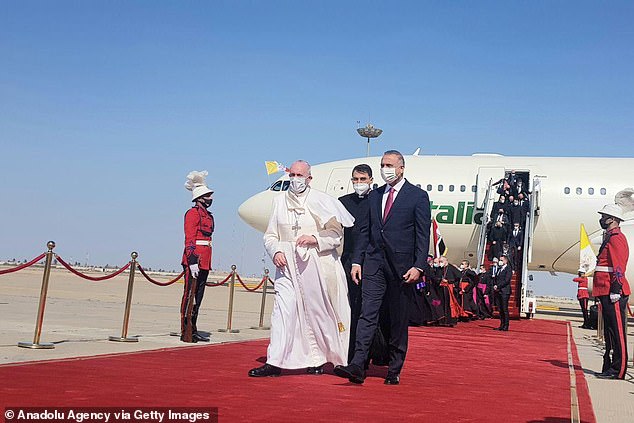 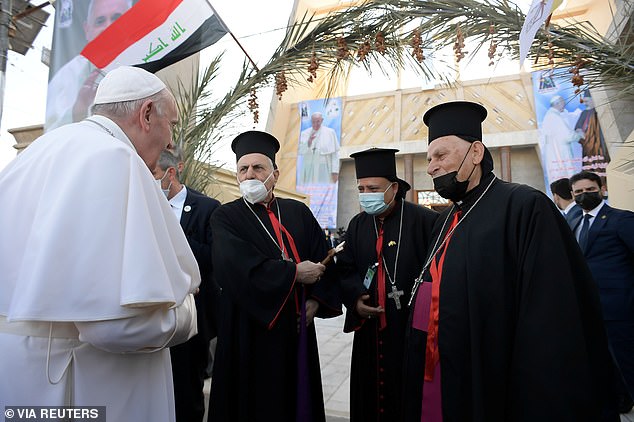 Francis meets bishops, priests, seminarians and catechists at a cathedral in Baghdad decorated with posters of him

‘I’ll try to follow directions and not shake hands with everyone, but I don’t want to stay too far,’ Francis said ahead of his arrival.

Security will be tight in Iraq, which has endured years of war and insurgency, is still hunting for Islamic State sleeper cells, and days ago saw a barrage of rockets plough into a military base.

Francis will preside over a half-dozen services in ravaged churches, refurbished stadiums and remote desert locations, where attendance will be limited to allow for social distancing.

Inside the country, he will travel more than 870 miles by plane and helicopter, flying over areas where security forces are still battling IS remnants. 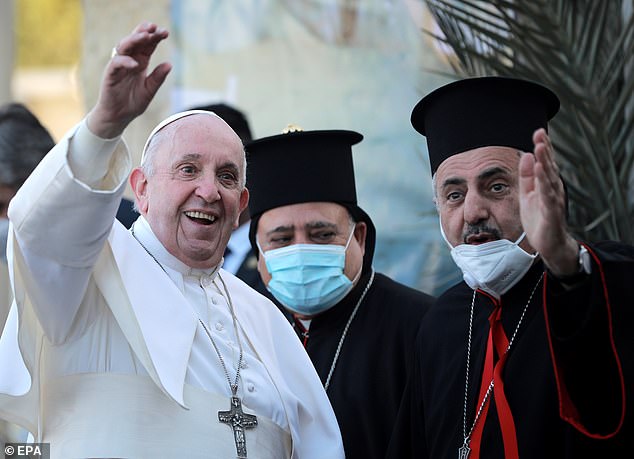 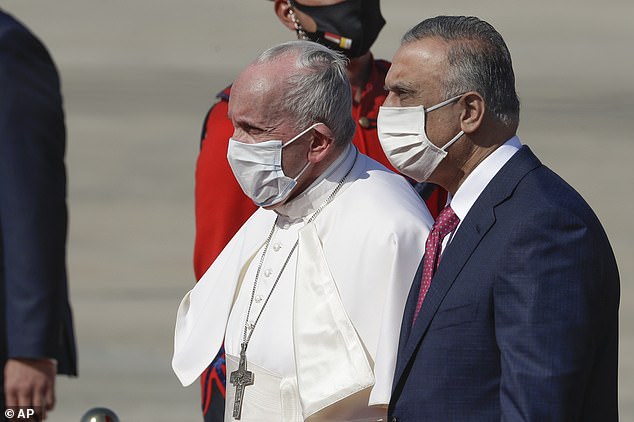 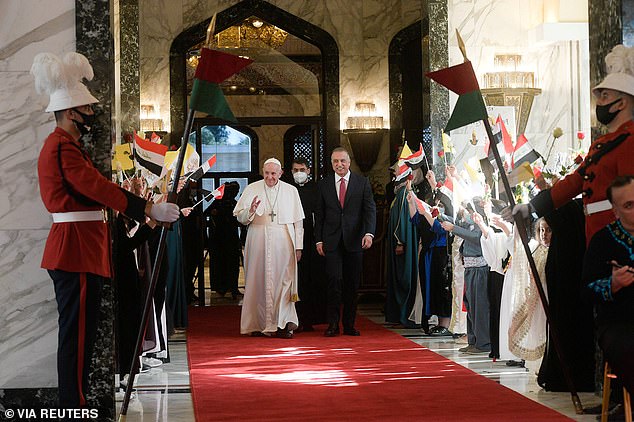 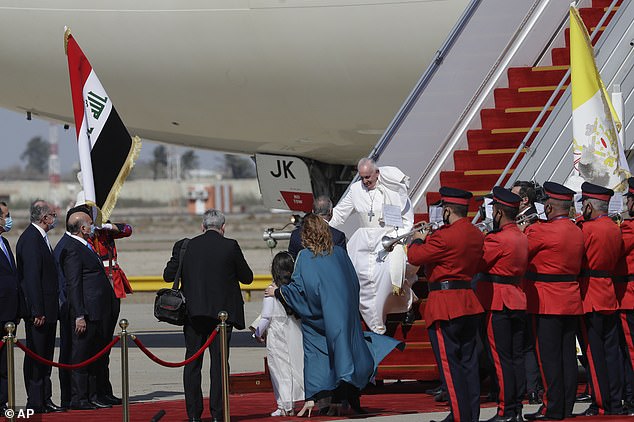 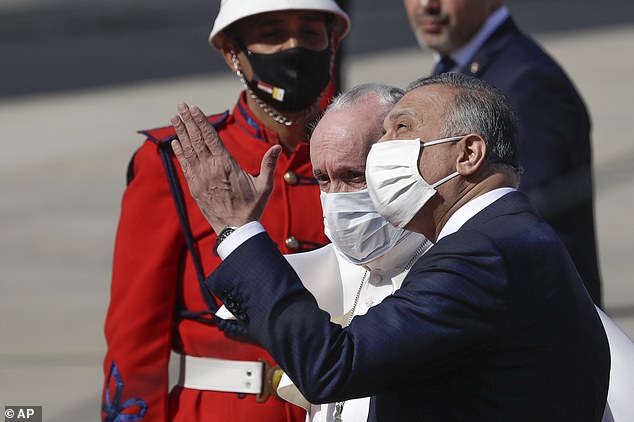 For shorter trips, Francis will take an armoured car on freshly paved roads that will be lined with flowers and posters welcoming the leader known here as ‘Baba Al-Vatican’.

The pope’s visit has deeply touched Iraq’s Christians, whose numbers have collapsed over years of persecution and sectarian violence, from 1.5 million in 2003 to fewer than 400,000 today.

‘We’re hoping the pope will explain to the government that it needs to help its people,’ a Christian from Iraq’s north, Saad al-Rassam, told AFP. ‘We have suffered so much, we need the support.’

Pope Francis is the first to visit Iraq, after Pope John Paul II had to cancel a trip in 2000 when talks with the Government of then-leader Saddam Hussein broke down.