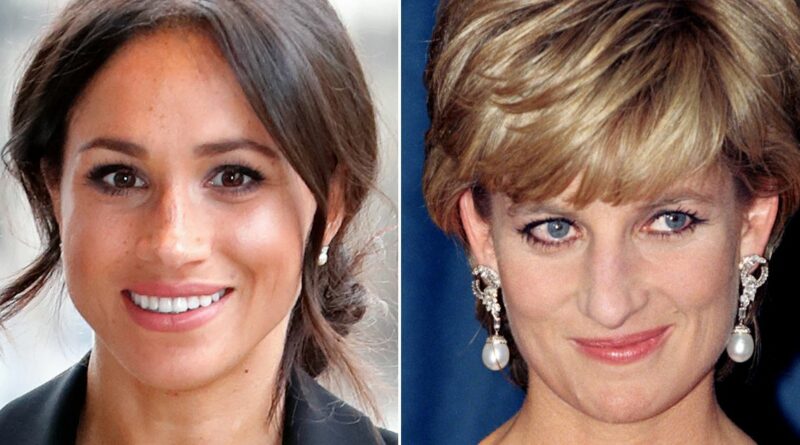 There were concerns that Meghan Markle could eclipse the popularity of Princess Diana as support for her swelled when she joined the Royal Family, a royal biographer has claimed.

Meghan officially became a member of the royals in May 2018 when she married Prince Harry in an extravagant ceremony in Windsor.

However, the couple soon stepped back from royal duties in March 2020, admitting in an explosive interview with US chat show host Oprah Winfrey that they had struggled with life in ‘The Firm’.

But after successful early tours by the couple, royal biographer Andrew Morton has suggested that there were initial fears among the royal institution that Meghan’s fame might eclipse the work of Prince William and his wife Kate Middleton.

Speaking on To Di For Daily, Host Kinsey Schofield picked up on a point royal biographer Andrew Morton made in his book, ‘Meghan and the Unmasking of the Monarchy’, noting: “You wrote about somebody saying that Meghan would become bigger than Diana?

“I think it was a courtier or somebody said that there was concern that Meghan would become bigger than Diana and it would really kind of shrink the Cambridges, and shrink Charles and Camilla and their objectives and what they were trying to do?

“Do you think that was really an option? That Meghan Markle could become bigger than Princess Diana?”

“Well, this is what was being said at the time,” Andrew replied.

“Remember, we didn’t have social media when Diana was around, and now we do, so you can be incredibly well-known globally, very quickly.

“I think that what happens is that, in the Royal Family, it’s all about position, not popularity.”

Andrew went on to support this by referencing Princess Margaret’s marriage to photographer Lord Snowden, which he claimed made them initially outshine the Queen and Prince Philip.

However, the royal biographer emphasised that the surges of initial popularity on royal tours inevitably faded over time.

So, he claimed: “Meghan and Harry came back from Australia on a high and thought they were the golden couple – yes they were – but that only lasts for so long.

“In ten years’ time when Meghan is 50, would as many people turn out to see them? No, they would want to see George, Charlotte, and Louis.”

To get more royal stories from Daily Star delivered straight to your inbox sign up to one of our free newsletters here .