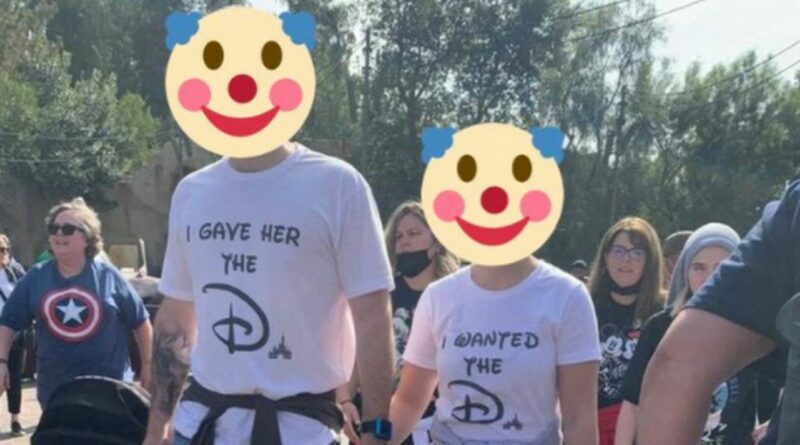 Fuming Disney fans are demanding that raunchy t-shirts are banned across their theme parks after a picture of a couple sparked outrage on Twitter.

A man and woman were spotted wearing unofficial Disney tops at Disney World Florida this weekend.

The tees, available to buy on Amazon, used the famous Disney "D" to spell out "I gave her the D" on his shirt and "I wanted the D" on hers, reports the Mirror.

Angry parents are now calling for thrill-seekers donning the rude tops to be refused access to Disney parks.

Sam Carter, a former Disney creative designer, posted a photo of the couple online with clown emojis superimposed to cover their faces.

It caused a stir online with many calling for anyone else seen wearing the tops to be kicked out.

One put: "If they banned these shirts from ever being allowed in a Disney park again I wouldn’t be mad."

Another tweeted: "D is for discomfort – kind of tacky to bring to a theme park."

A third questioned: "I just don't understand how they were let through the gates how sad. Ban them."

However, a few users argued it was a fuss about nothing.

One wrote: "It’s only inappropriate if YOU think of it in the inappropriate way. Get your minds out of the gutter… a kid sees the unmistakable Disney D not the D you do."

Another put forward: "'I gave her the Disney'. If you read anything else into that; it’s [your] misfiring programming. She wanted a trip to Disney and she got it."

On the Disney World website the company state: "We reserve the right to deny admission to or remove any person wearing attire that we consider inappropriate or attire that could detract from the experience of other guests."