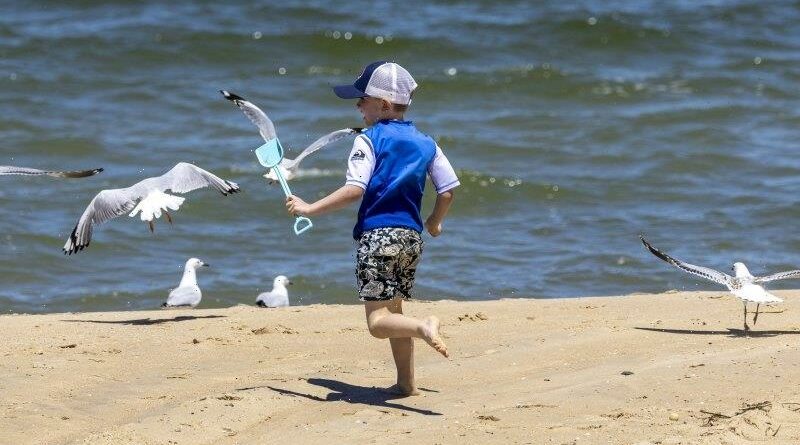 It might not be the #hotvaxsummer that we dreamed about. But Victoria is certainly in for a run of hot days.

With heatwave conditions across much of the state, Melbourne is set to top 33 degrees on Thursday, before reaching a scorching 38 degrees on New Year’s Eve. 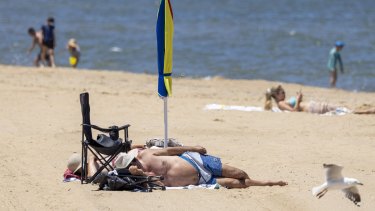 It will be a cracking New Year’s Eve for beachgoers. Credit:Wayne Taylor

It should be a good day for those headed to the beach (and lucky enough not to be in isolation), with clear and sunny skies over the city, and winds of between 20 and 30km/h, becoming light in the evening.

Forecasters say Melburnians will be waking up to a mostly sunny New Year’s Day, with a 5 per cent chance of rain and an expected high of 31 degrees. Clouds are expected to return to the city from Sunday, when the peak temperature will be 25.

It is predicted to be partly cloudy, too, on Monday, with a top of 23 degrees expected, and a 20 per cent chance of showers. Winds will course southerly at 20-30km/h.

Elsewhere in the state, forecasters expect New Year’s Eve tops of 37 degrees at Geelong and the Surf Coast, 33 on the Mornington Peninsula, 39 at Bendigo, 36 at Ballarat, and 40 at Shepparton.

It should be even hotter on New Year’s Day, with the state’s far north-west – particularly the Mildura to Hopetoun area – expected to see temperatures hanging around the low 40s, possibly up to 43 degrees.

Geelong, the Surf Coast and the Mornington Peninsula are expected to reach 29 degrees on New Year’s Day, while Bendigo is set to reach 40, Ballarat is expecting tops of 35, and Shepparton is slated to hit 41.

While the hot temperatures this festive season are pretty common for summer, Bureau of Meteorology senior forecaster Keris Arndt said it was unusual to see heatwave conditions for several days running.

“So, through most of the state, we’re in severe heatwave conditions from Friday through to Sunday.”

Mr Arndt said forecasters expected elevated fire dangers in the very high to severe range, particularly in north-western parts of Victoria, but not through Melbourne.

With New Year’s Eve fireworks expected across the state, he warned Victorians to heed fire danger ratings from the bureau, as well as the Country Fire Authority, Fire Rescue Victoria, and other emergency services.

“They will be busy over this time of year as they often are, and it’s definitely going to exacerbate things,” Mr Arndt said.

WorkSafe Victoria on Wednesday reminded people to stay away from unauthorised fireworks displays in the New Year, saying they are illegal and can have potentially “catastrophic consequences”. 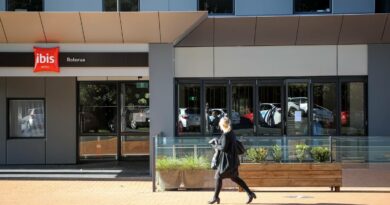