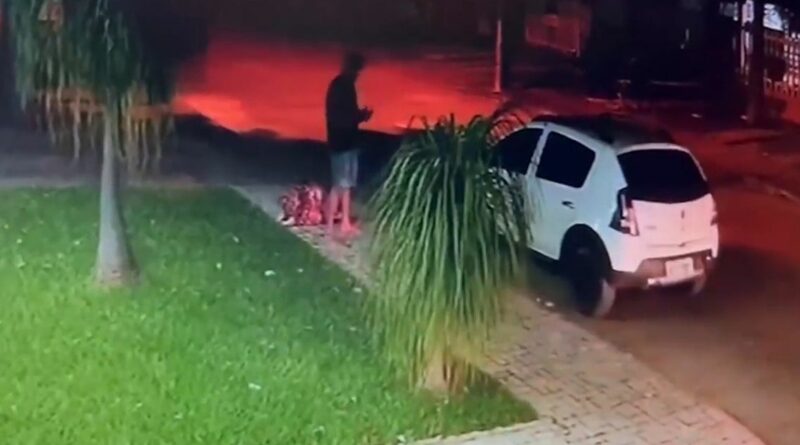 A scorned husband was left fuming when he caught his wife apparently cheating on him with a homeless man inside her car.

Eduardo Alves, who works as a personal trainer, said he had been unable to find his wife, who left home to help the man who was living rough neighbourhood of Jardim Roriz, in Planaltina of Brazil, in the early hours of March 10.

CCTV near his home showed the jaw-dropping scene when Eduardo found the pair inside the white car parked outside their house.

Eduardo bangs on the car window furiously before opening the car door and climbing inside, apparently to give the man a walloping.

The homeless man flees from the other side of the car but Eduardo quickly stops him and drags him back to the roadside and starts punching him in the face.

His wife gets out of the car, looking distressed, and she begs for her husband to stop beating the man.

Eduardo reportedly told the police that he first thought it was a rape he was witnessing through the windscreen.

However, his wife, whose name has not been revealed, told officers that the relations she was having with the man at the time were, in fact, consensual.

She also explained to the police that she enjoyed helping vulnerable people through the church she attends.

The woman allegedly later told a friend she had received a "message from God" to help the homeless man she was caught copping off with.

For more stories from the Daily Star, sign up to one of our newsletters here.

The homeless man, also unnamed, was taken to hospital with bruises and two black eyes. He is said to be recovering well from the walloping he sustained.

The Civil Police (Brazil's investigative police force) of the Federal District continues to investigate the case.