Home » ‘There is no time to waste’: WHO needs new powers to control future outbreaks, report says

Governments must urgently give the World Health Organisation the power to announce new disease outbreaks without first getting permission from the host country if future pandemics are to be avoided, according to an expert panel that has spent a year investigating the coronavirus outbreak.

Even as the world continues to grapple with COVID-19, it needs to set up a stronger system to prevent the next global pandemic “because a novel pathogen can emerge at any time”. 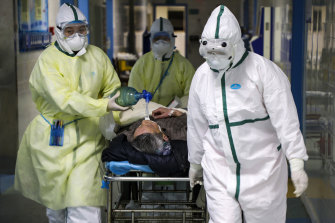 A patient in Wuhan, China in the isolation ward who has COVID-19 in February 2020. Credit:Chinatopix

The co-chair of the international panel, former New Zealand prime minister Helen Clark, said simply: “There is no time to waste.”

The report of the Independent Panel for Pandemic Preparedness and Response also urges world governments to allow WHO infection experts immediate access to inspect outbreaks anywhere in the world in an effort to prevent future cover-ups and delays.

“Another zoonotic disease emerging is inevitable. The question is whether we have the tools in place for aggressive containment,” Ms Clark told The Sydney Morning Herald and The Age. The international panel of 13 eminent clinicians and former leaders calls on world leaders to meet at the United Nations General Assembly in September to start the process.

“If not now, when?” Ms Clark said. “If not today’s leaders, who?” The panel’s report, Covid-19: Make it the Last Pandemic, says that the World Health Organisation was too slow and too meek in declaring a pandemic last year, and that too many governments dithered instead of acting to contain the virus.

The panel points out that 11 high-level commissions published 16 reports after the outbreak of the deadly H1N1 swine flu in 2009, but that none had their recommendations adopted in full.

The Independent Panel says that presidents and prime ministers should take direct ownership of a new system of surveillance and prevention because “pandemics pose potential existential threats to humanity and must be elevated to the highest level”. Leaders should create and take membership of a Global Health Threats Council to drive reform.

In other key recommendations, the governments who comprise the membership of the World Health Organisation should increase their funding of the body by two-thirds and give it financial independence.

Governments should create an international pandemic financing facility, making collective annual contributions of $US5 billion to $US10 billion in 10- to 15-year commitments. This would allow the Health Threats Council firepower to make emergency releases of $US50 billion to $100 billion when a pandemic is declared.

The WHO’s director-general, who was criticised by Donald Trump and others as too weak and beholden to China, should be given more independence, with a term of seven years and limited to one term only, the panel recommended.

A new “end-to-end platform” to supply vaccines and other vital health supplies should be established, a bigger version of the existing COVAX vaccine supply system for poor countries. It would supply emergency needs in a pandemic “swiftly and equitably worldwide—shifting from a market model to one aimed at delivering global public goods”.

Every government should create the post of national pandemic coordinator, an official who would be directly accountable to the head of government and given a “mandate to drive whole-of-government coordination for pandemic preparedness and response”.

The panel was created last May at the request of the world health ministers who meet as the World Health Assembly. The other co-chair is the Nobel Peace Prize-winning former president of Liberia, Ellen Johnson Sirleaf.

Get our Coronavirus Update newsletter

Stay across the news you need to know related to the pandemic. Get it every Monday.