Home » World News » This ‘Financial Activist’ Says Black Women Should Assert Their Fiscal Independence Even While In Relationships. Here’s Why

The first thing you notice about Dasha Kennedy’s Instagram page probably isn’t her robust following of more than 181k.  Or even the beautiful images of her striking face. It’s the handle: @TheBrokeBlackGirl.

As you can imagine, there’s a story behind the name. A really inspiring one.

The Georgia native, 34,  grew up as most middle-class Black people do, in households that prioritized keeping food on the table and a roof over heads, but seldom talked about financial literacy.

“Those conversations were not happening in my home,” Kennedy shared with Essence.  “And now that I’m older, I wish they were. But one of the things I’ve come to realize is that talking about finances can be a very emotional ordeal, especially in our community.”

Kennedy said that because her parents kept their financial behaviors very private, she made some unnecessary missteps along the way while navigating early adulthood, including plummeting in more than $20,000 in debt following her divorce seven years ago. Used to being in a two-income household and not making her own finances a priority, she began to drown in bills. This, she says, was a turning point in her financial literacy journey.

“My experience with money was an interesting one because despite working in the finance sector for years, I still got caught up in debt,” she said, referencing her time working as a relationship manager at US Bank and at Kemper as an accountant.  “I was abusing credit cards and taking out payday loans–something I never thought I’d have to do. It wasn’t until life actually started to happen that I realized what I thought I knew about money was very minimal in comparison to the actual experience of different financial hardships. It was an eye-opening experience.”

She said her divorce taught her to always put her personal financial health first even while in a life partnership and advises women, specifically Black women, to do the same.

“When I think of Black women in relationships with Black men, money discussions  get lost in the minutiae,” she says. “We hear so many conversations about who’s paying the bills, the 50-50, and all of these expectations of Black women not only being in the workforce, but then also coming home to cook and clean, which is unpaid labor within itself. So, when I think about Black women, relationships and money, one of the things I encourage is to never take the backseat to your finances, regardless of the type of relationship you have. I always empower women, especially Black women, to stay involved, ask questions and not to fall under the trope of, ‘oh, if you’re too deep into asking the finance questions, you’re going to come off like a “gold digger” or someone who’s only concerned about the money.’”

She also correctly points out that financial security for Black women is a key element to not only our survival, but our family’s as well.

Research shows that nearly 80 percent of Black mothers are sole breadwinners for their families, which means their households are reliant on their wages to make ends meet and get ahead. Nearly four million Black families are headed by Black women and more than 1 in 4 of those households live below the poverty line.

“We have every right to ask the right questions in our relationships, to inquire about debt, to inquire about credit, to inquire about income–because on the other side of that, when we have to go out into this world, we are being paid less, we are struggling with paying off debt and being met with other factors that impact us simply because we are Black women.”

After finalizing her divorce in 2015, Kennedy said it took her about three years to pay off everything. While organizing her own finances, she decided to share her learnings with other women along the way. Her personable and authentic way of articulating tough financial concepts caught on like wild-fire. Now she’s teaching people around the country how to make their money make more sense for them. One of her partners in this process is National Debt Relief, an organization dedicated to assisting millions of Americans achieve financial independence.

“National Debt Relief reached out to me after seeing some of my content and the authentic way I discuss debt on my platform,” she shared. “I really aim  to present financial conversations in a way that humanizes the impact of debt. National Debt Relief is equipped with debt specialists that are there to help you and walk you through this journey because you’re going to feel so bad about even being in debt, you’re not going to want to tackle it alone.”

Along with regularly disseminating in-depth financial tips on her social platforms, she hosts classes, workshops and courses attended by thousands of participants. This is particularly rewarding because Kennedy says she sees herself in the people she helps.

“When I was going through stressful  financial situations,  I named my platform Broke Black Girl because that was who I was at the time,” she shared. “I kept the name because so many women resonate with it and now consider it a safe space.  That’s what it’s all about for me.” 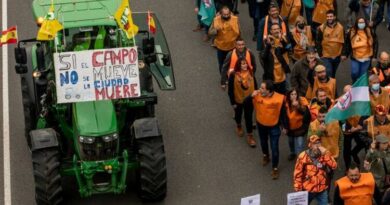 Why are farmers protesting in Spain? Madrid will tackle energy crisis with or without EU