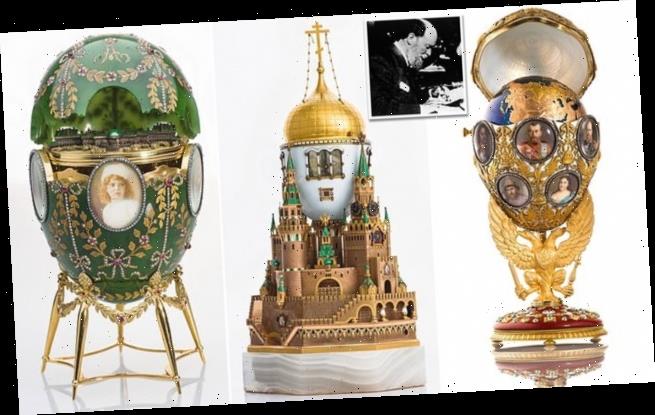 Three of Carl Faberge’s most exquisite eggs will be displayed in the UK for the first time at the Victoria and Albert Museum.

The exhibition on the Russian goldsmith, who died in 1920, will open in London in November and reflect on his connections to the capital, which was home to the only branch of his shops outside Russia.

Faberge was famous for intricately creating golden bejewelled egg-shaped ornaments for Russian Tsars to give to their wives and mothers.

They will be displayed alongside a Faberge cigarette lighter given to Edward VII by his mistress, Alice Keppel, plus a model of the King’s dog, Caesar, and his racehorse, Persimmon. 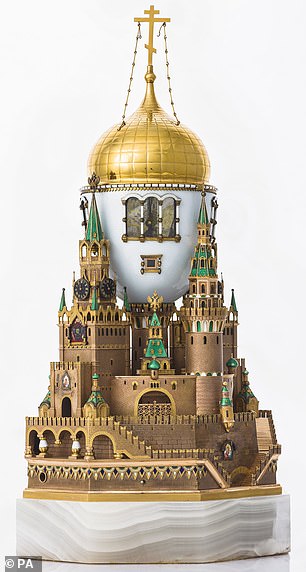 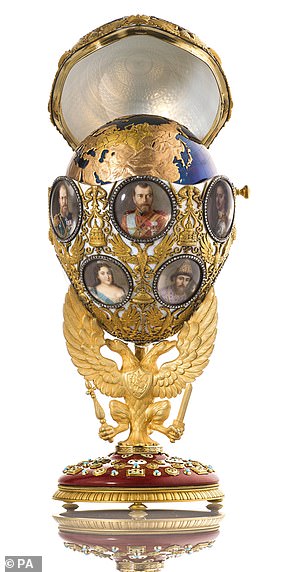 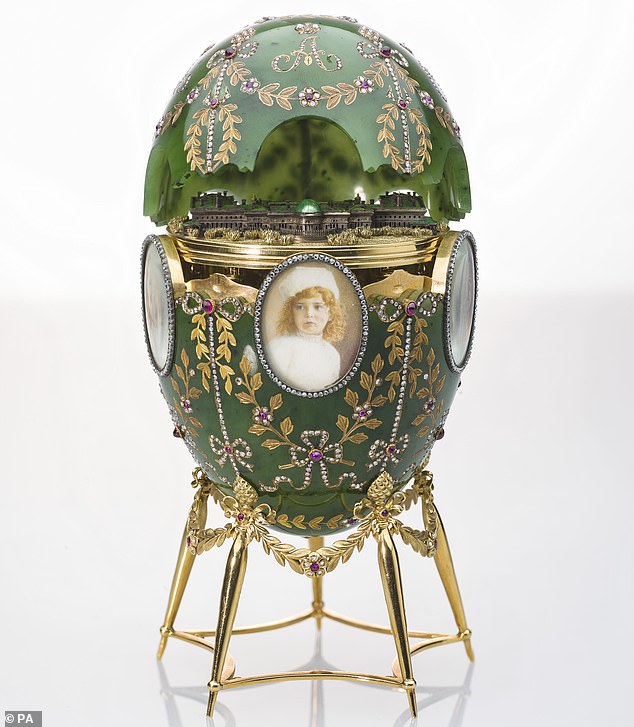 The Alexander Palace Egg, from 1908, which is part of a collection of Carl Faberge’s golden eggs that is to be displayed at London’s V&A Museum in November

Kieran McCarthy and Hanne Faurby, curators of the exhibition, said in a statement: ‘The story of Carl Faberge, the legendary Russian Imperial goldsmith, is one of supreme luxury and unsurpassed craftmanship.

‘Celebrating Faberge’s extraordinary achievements, this exhibition focuses on the over-looked importance of his London branch, the only one outside of Russia.

‘It attracted a global clientele of royalty, aristocrats, business titans and socialites.

‘Through Faberge’s creations the exhibition will explore timeless stories of love, friendship and unashamed social climbing.

‘It will take the visitor on a journey of sublime artistry and patronage towards the revolution that tragically closed Fabergé – but will send visitors away on a high, by honouring Faberge’s greatest legacy, with a dazzling final display of his iconic Easter eggs.’

The 50 Imperial Eggs, 43 of which survive, are the most famous of the Faberge eggs, which were virtually all manufactured under the goldsmith’s supervision between 1885 and 1917. 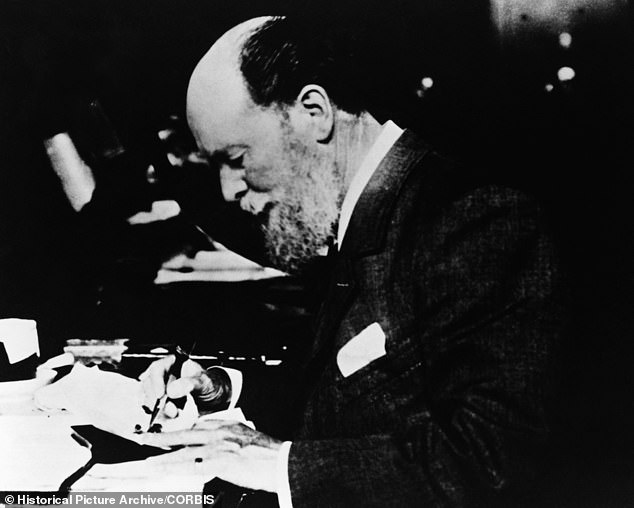 The ornaments were made for the Russian Tsars Alexander III and Nicholas II as Easter gifts for their wives and mothers.

Tsar Alexander III (of the Russian royal family) commissioned the first Imperial Faberge egg as a gift for his wife, Empress Maria Feodorovna.

She loved the egg so much that Alexander commissioned a new one for every Easter afterward until his death in 1894, after which his son Nicholas II kept up the tradition, gifting two a year – one to his wife and one to his mother.

Ten eggs were produced from 1885 to 1893 during the reign of Emperor Alexander III and a further 40 were created during the rule of his dutiful son, Nicholas II – two each year – one for his mother the dowager, the second for his wife.

Faberge In London: Romance To Revolution will run from November 20 this year to May 8, 2022.

Born in 1846, Peter Carl Faberge took over the family business when his father Gustav, who was a jeweller, died in 1882.

At the Pan-Russian Exhibition held in Moscow later that year Faberge creations proved to be a hit.

One piece on display was a replica of a treasure from the fourth-century BC that impressed Tsar Alexander III so much that he ordered Faberge works to be displayed in the Hermitage museum, as examples of superb contemporary Russian craftsmanship.

From there Faberge decided to start producing their signature eggs. 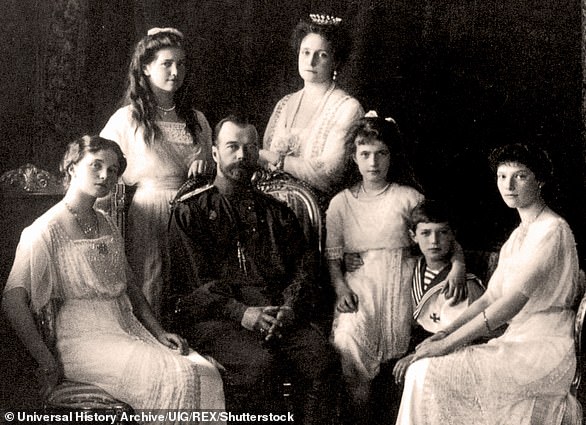 In 1885, the Hen Egg was given as a gift from the Tsar to his wife Maria Fyodorovna for Easter which she loved. Just a few days later the Emperor assigned Faberge the title of ‘Goldsmith by Special Appointment to the Imperial Crown’.

The Tsar even commissioned the company to make an Easter egg as a gift for her every year thereafter.

By 1887, the emperor apparently gave Faberge complete freedom with the egg design with the only caveat being each one should be unique and each should contain a surprise. 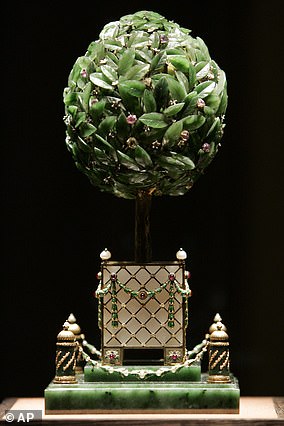 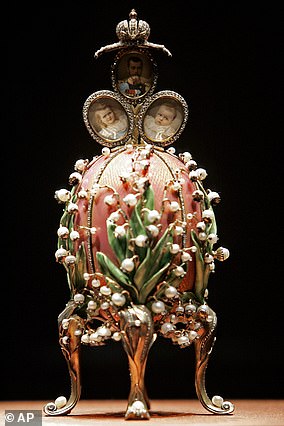 The Bay Tree egg (left) is a jewelled nephrite and enameled Easter egg made under Peter Carl’s supervision in 1911 for Nicholas II of Russia to present it his mother. The egg ‘Lilies’ (right) was made by request of the last Russian Emperor Nicholas II as a present to his wife in 1898

When Alexander III died, his son Nicholas II became the next Tsar.

He continued his father’s tradition and even expanded it by requesting that two eggs be created – one for his mother and one for his wife. His mother ended up with 30 Faberge eggs in her lifetime.

The tradition continued until the October Revolution in 1917 when the entire Romanov dynasty was executed and many treasures, including the eggs, were confiscated by the interim government.

Of the 50 eggs that Faberge lovingly crafted, only 24 now survive, making them among the rarest and most fabulous of the world’s jewels.

When one of the eggs went up for auction at Christie’s in 1994, it sold for a staggering $5.5million. 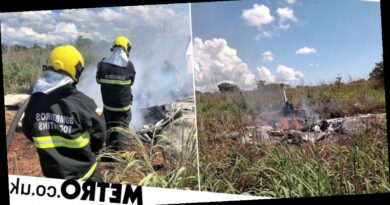