Teenage sisters who ‘were sexually assaulted by their father’ before they stabbed him to death definitely WERE abused, experts find, as video emerges of him ‘kicking’ one of them

Three Russian teenage sisters who are accused of murdering their ‘tyrannical’ father were abused by him, forensic experts have confirmed.

Krestina, 19, Angelina, 18, and Maria Khachaturyan, 17, say they acted in self-defence when they stabbed their father Mikhail to death in his apartment block.

All three defendants alleged they suffered abuse including beatings and rape at the hands of their father.

The 57-year-old’s body was found with ‘dozens’ of stab wounds close to the lift in the family’s block of flats near the Altufievskoe highway in Moscow last July.

Now the Moscow Department of Health determined that Mikhail Khachaturyan inflicted ‘serious harm’ on his daughters’ health, according to findings cited by the lawyers representing the sisters. 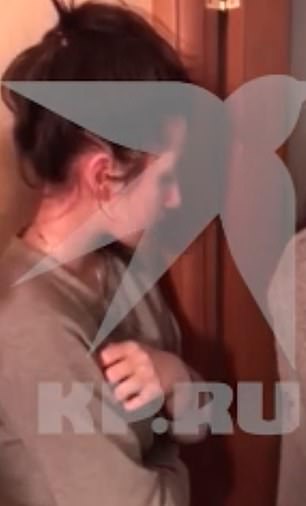 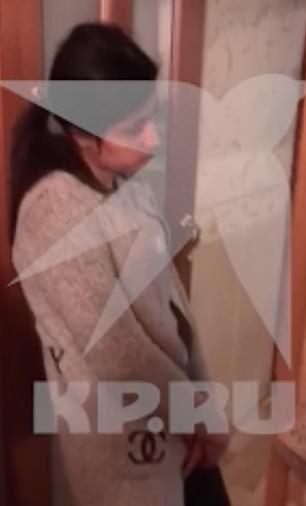 In the short clip filmed by Mikhail Khachaturyan, his daughters can be seen watching as he appears to yell at them for ‘eating too may sweets’ 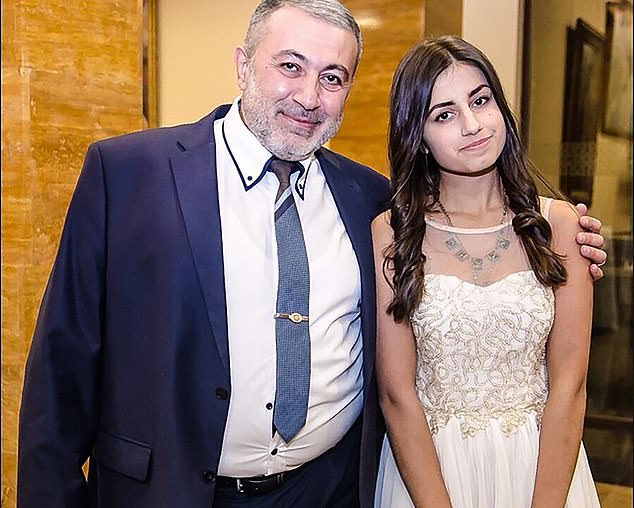 Mikhail Khachaturyan (left) was stabbed to death in Moscow by his three daughters (Angelina, pictured right) last year, and to the dismay of psychiatric experts and defence lawyers all three will be stand trial for murder

In a Facebook post on Monday, it was confirmed by forensic experts the defendants suffered abuse and diagnosed them with mental health disorders.

The forensic expert also noted that the results of the additional examination showed ‘the girls were in a position of necessary defence’.

The statement said: ‘On the basis of all the materials they provided for the examination, the Bureau of Forensic Medical Examination of the Moscow Department of Health specialists confirmed the diagnoses of Krestina, Angelina, and Maria and determined the harm caused to their health as serious.

‘The capital’s forensic experts confirmed…that the mental disorders identified in the Khachaturian sisters are in a causal relationship with the actions of Mikhail Khachaturyan.’

The ruling came as a new video was released of Mr Khachaturyan appearing to shout at his daughters and even kicking the youngest girl, Maria.

The short clip comes from evidence in the case and shows the father yelling at his daughters because they ‘ate too many sweets’.

As the video, filmed by Mr Khachaturyan, pans across the kitchen table, it shows a series of empty sweet wrappers on the counter. 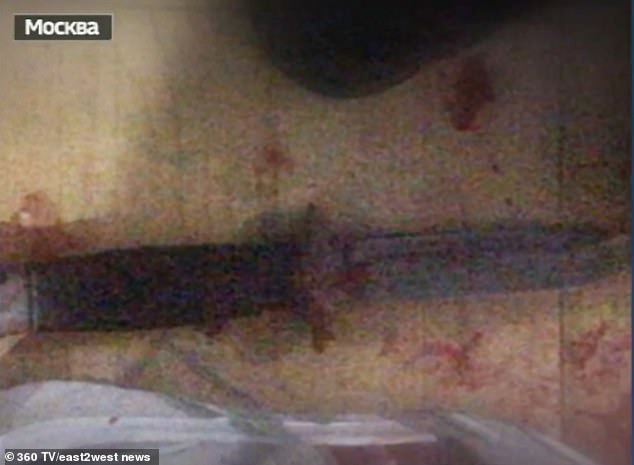 In July last year the girls were said to have attacked their father with a hunting knife (pictured). He was stabbed through the heart and died in their Moscow apartment block 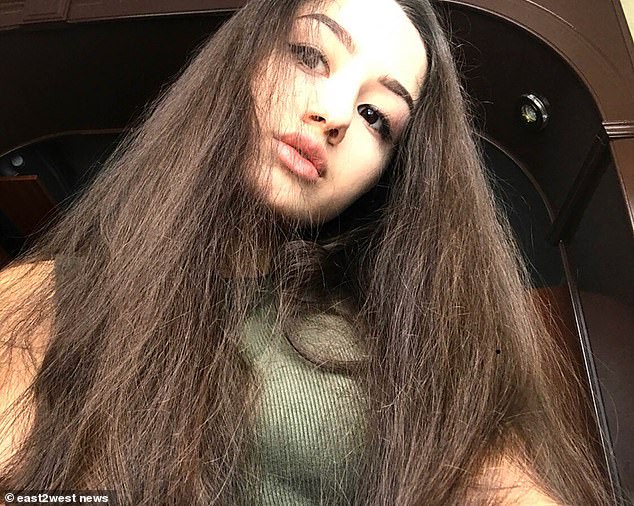 One of the sisters was said to have grabbed the knife Mikhail Khachaturyan was wielding and stabbed him, as the others joined in the attack. Pictured is Maria one of his daughters 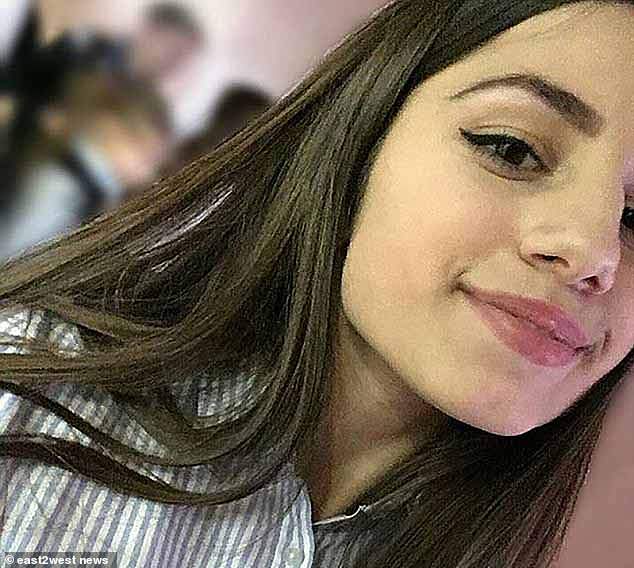 According to Russian media, Mikhail Khachaturyan can be heard shouting to one of his daughters, ‘turn to me, freak’.

Alexei Parshin, a lawyer acting for Angelina Khachaturyan, told Russian newspaper Komsomolskaya Pravda: ‘This video is further proof of what kind of father Mikhail Khachaturian was. Just a few seconds is enough to see the situation in which the girls lived.’

It is alleged that on the day of the attack the father had threatened them with a knife in their flat.

One of the sisters grabbed the knife and stabbed him, and the others joined in the attack, according to local media reports.

The man tried to escape the flat but was attacked more and died near the elevator.

All three sisters have been charged with murder, which comes with a maximum sentence of ten to 15 years in jail. 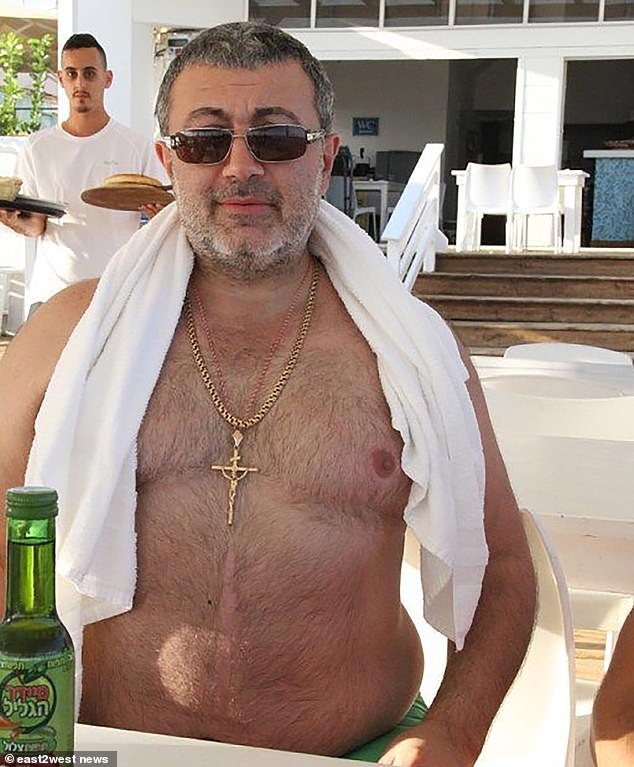 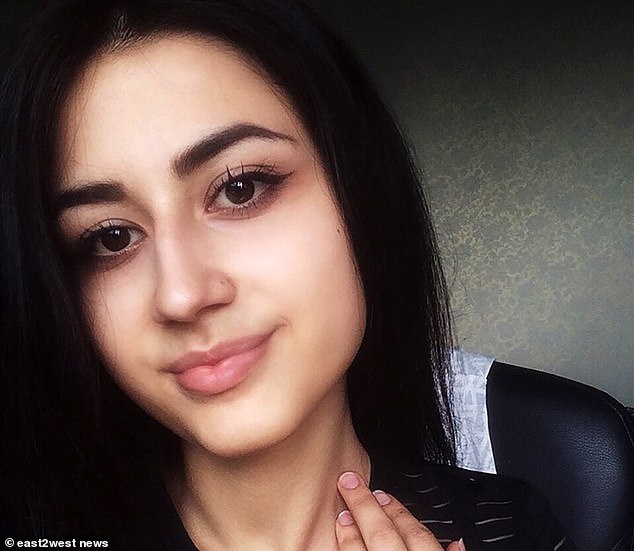 Reports in the Russian media, which cited police sources, said the sisters all confessed to jointly killing their father, claiming they suffered years of appalling abuse from a man who was allegedly a heroin addict.

In the dead man’s Audi Q7 car police reportedly found two kilograms of heroin along with his arsenal of a pneumatic riffle, a smooth bore rifle, three pneumatic handguns, a signal gun, and a gas gun.

It has also been claimed Mr Khachaturyan put cameras in the family home to snoop on his daughters.

A family friend previously told local media that the girls’ mother ran away from the family home due to Mr Khachaturyan’s treatment of her and that he was linked to the criminal world.

The case sparked outcry from Russian lawyers and human rights activists who say the charges should be dropped.

Supporters of the three sisters have staged weekly protests in Moscow and St Petersburg, blaming Russia’s legal system which they say turns a blind eye to domestic abuse.

All three sisters are currently released from prison under ‘special restrictions’, with a curfew imposed and banning them from using the internet and mobile phones.