Home » World News » Train wreck of a commute: ‘Bits of the train were bouncing down the tracks’ 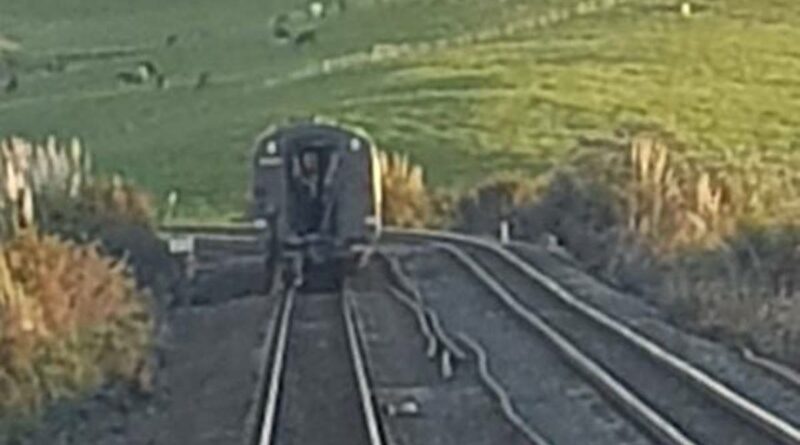 Passengers travelling in a carriage that broke away from the rest of Te Huia train bound for Hamilton last night have described a loud “steel-on-steel” screech echoing through the train as they watched pieces rip off and bounce down the track.

Waikato woman Kiley O’Meara was in the first of the two back carriages that separated from the rest of the Te Huia train just 10 minutes after leaving the Papakura station at 4.42pm.

The train had just travelled across a level crossing when they heard “a god awful noise” as the emergency brakes kicked in and the carriages came to a grinding halt about 500m away from the rest of the train.

“There was just this open door and we were just looking and the train and the entrance were down the tracks.”

O’Meara said its a really loud “steel on steel sound” and it was almost like they had hit a vehicle.

“Everyone was looking around to say, ‘what the hell has just happened?’.”

She said it was “really bizarre” and is still questioning how it could even happen. They hadn’t even had a chance to pay their fares before it snapped off.

Her son Connor, 15, was sitting near the front of the carriage and watched in disbelief as the bridge connecting the two carriages started to slowly separate.

“The black curtain [covering walkway between the two carriages] just ripped open and started shaking around and hitting against everything. There were paper bits flying out of the second carriage and then I saw bits of the train bouncing down the track and it [the front of the train] just took off,” he said.

Conner said everyone was a bit panicked for the first 20 minutes as the 50 or so passengers sat in their seats not knowing what was happening.

“We were concerned another train was going to come along the tracks or were we going to have to get out on the metal in the middle of nowhere,” O’Meara said.

Once the train stopped, they overheard the attendant ring the train driver and asked him if he was coming back to get them.

Eventually the attendant started making hot beverages for everyone and tried to keep them calm, while the driver dressed in high vis appeared and after about an hour the carriages were re-coupled.

The passengers from the back two carriages were then moved to the front carriages and the train crawled along the tracks towards Pukekohe train station.

“We just started literally limping and it was horrible – we limped to Pukekohe… there was a toxic smell coming through the carriages because it was chugging along so slowly I think because of the brakes,” O’Meara said.

The train stopped in Pukekohe and the passengers were given the option of either getting a bus or waiting for the next train.

O’Meara and the three teenagers she was with who had decided to take the train to Auckland to go ice skating eventually got dropped off by the bus in Huntly about three hours later than planned.

She said it was a “freak accident'” that could have been much worse. She kept thinking about what would have happened if someone had been walking between the two carriages.

In a statement last night, KiwiRail spokesman chief operating officer Walter Rushbrook said KiwiRail was investigating how the carriages became separated from the rest of the train between Papakura and Paerata.

“KiwiRail apologises to Te Huia passengers, and to those affected by subsequent disruption on the Auckland network. Until the investigation is complete, it would be premature to speculate on the cause.”

He said no one was injured and the passengers remained calm and in good spirits.

Only one of the two services is running today.