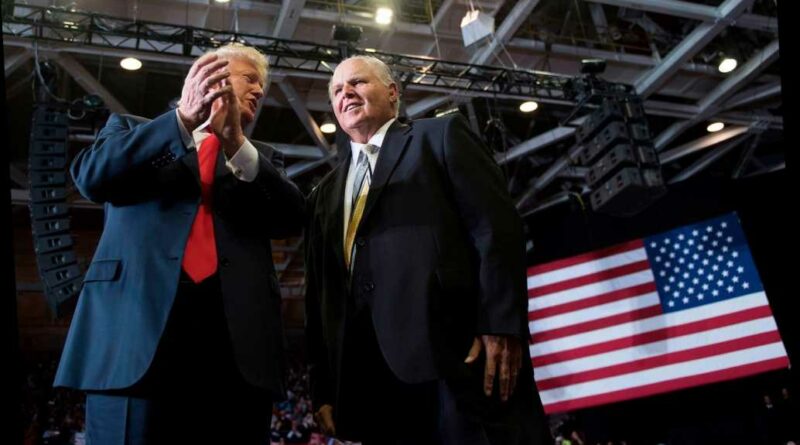 Former President Donald Trump on Wednesday gave his first TV interview as an ex-president to remember radio host Rush Limbaugh after his death at age 70 from cancer.

Trump said in the Fox News interview that he spoke with Limbaugh “three or four days ago” before he died of Stage 4 lung cancer.

“Three or four days ago I called him,” Trump said. “His fight was very, very courageous and he was very, very sick and, you know, from diagnosis on. It was just something that was not going to be beat, but you wouldn’t know it.”

Trump added that Limbaugh “told me he was married to an angel.”

“Every time I spoke to him, he would tell me how great she was. She took such great care. He was very brave — I mean he in theory could have been done four months ago, really. He just, he was fighting till the very end. He was a fighter,” Trump said.

Trump was acquitted Saturday by the Senate of inciting the Jan. 6 Capitol riot that disrupted certification of President Biden’s victory. Trump on Tuesday urged Republicans to oust Senate Minority Leader Mitch McConnnell (R-Ky.) who voted to acquit Trump but later said he was “practically and morally responsible” for the rampage.

“Rush thought we won. And so do I, by the way. I think we won substantially. And Rush thought we won,” Trump said in the Fox News interview, after being asked what he and the radio legend discussed following the election on Nov. 3.

“Rush felt that way strongly. And many people do, many professionals do. And I don’t think that could have happened to a Democrat, you would have had riots going on all over the place… But Rush felt we won and he was quite angry about it, quite angry.”

Trump said he didn’t discuss his own political future with Limbaugh.

“I was disappointed by voter tabulation. I think it’s disgraceful what happened. We were like a third world country on election night with the closing down of the centers and all of the things that happened later. And he was furious at it. And many people are furious. You don’t know how angry this country is. And people were furious,” Trump said.

Trump’s claims of voter fraud were rejected by courts.

Trump said he and Limbaugh weren’t friends before he announced his presidential run in 2015. They later golfed together and Trump presented Limbaugh with the Presidential Medal of Freedom last year during his State of the Union speech.

“You know, I didn’t know Rush at all. I had essentially never met Rush. And then when we came down the escalator, he liked my rather controversial speech. I made that speech that was a little bit on the controversial side and he loved it,” Trump said.

“And he was, without ever having met him or talked to him or had lunch with him or asked him, he was with me right from the beginning. And he liked what I said and he agreed with what I said, and he was just a great gentleman.﻿”

“I’ve heard as many as 39 million people, you know that’s an audience that you don’t hear about anymore,” Trump said.

While golfing, Trump said, “He was a very strong guy — physically very strong, hit the ball a long way.”

Trump admitted in the interview that his medal presentation to Limbaugh wasn’t actually a surprise, as it appeared to some TV viewers because of Limbaugh’s emotional reaction.

“I did tell him beforehand because we didn’t have the, really the power of not doing it. You know, Rush was very sick at the time, he was at a hospital in Boston, and I didn’t want to deal with a surprise thing,” Trump said.

“It was a very difficult thing for him to come into Washington,” Trump said. “Everybody in the room — you know you’re talking about the Republicans and the Democrats — you had half of that room that went crazy… Half went just absolutely crazy, the other half sat totally dead silent. But 100 percent of that room respected Rush.”

Boy, 9, cries in court as he is accused of murdering 5 family members in fire